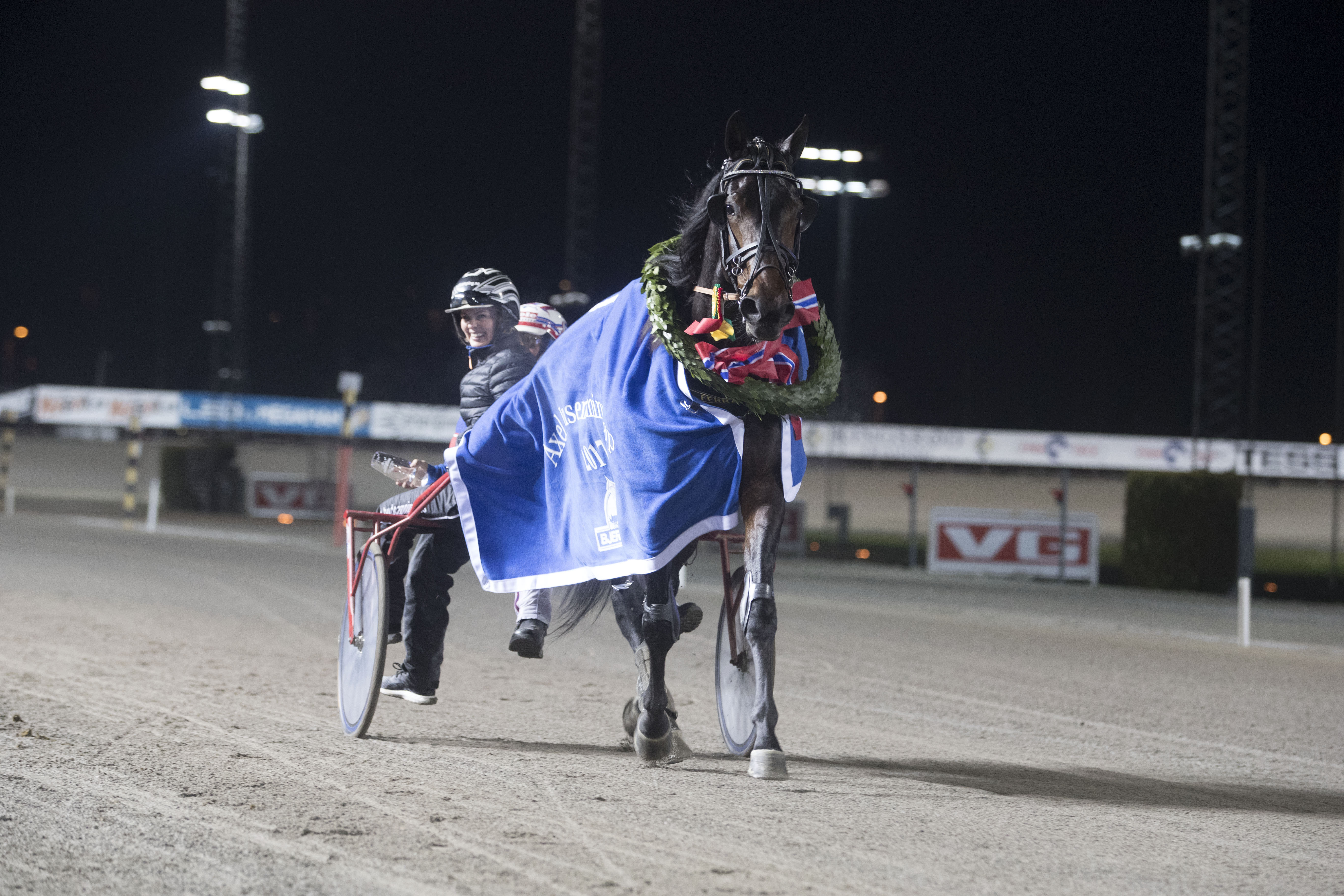 Last year Ferrari B.R. set a world record over 2,100 meters.
Now the Norwegian super trotter is back after a layoff due to an injury and after winning in his return, he'll be the favorite on V75®.
"He's not in top form yet but should still have a good chance to win" says trainer Per Oleg Midtfjeld.

Bjerke racetrack in Oslo is hosting this week's V75®. Racing there are two of Norway's top trotters, Ferrari B.R. in V75-1 and Lionel, the International Trot runner-up, in V75-3.
Ferrari B.R. is the horse who last year set a world record over 2,100 meters, 1:09.9. He won by 'a mile' and that was his real breakthrough. He won 11 out of 13 starts, but this year he's raced sporadically with 'only' three wins in four starts. Ferrari B.R. was together with Cyber Lane one of the favorites to win Copenhagen Cup back in the spring. A break in the start ruined those plans and he was forced to a longer layoff.
"Ferrari B.R. (V75-1) sustained an injury in a front ankle and that took some time to heal. We gave him all the time he needed to get well and after that we've trained him down again. Something wasn't right in Copenhagen and most likely he was feeling that front ankle there, since he made a break" says Per Oleg Midtfjeld who's on vacation in the Canary Islands when we're doing this interview on Monday.
"It's nice and warm here, 22-23 degrees. I'm coming back home on Thursday".

Won easily in the return
After over five months away from racing, Ferrari B.R. returned at Bergen on October 27. He won easily after being moved to the front after 500 meters
"He had to leave hard, 1:10 speed the first 500 meters, but after that we could take it easy. I never needed to pull the earplugs or the pull down bridle. He felt very good and I was very pleased with him" says Midtfjeld.
"I'm sure he'll be improved off of that race and he feels good in training afterwards. The ankle looks good too, so he came out of that race well. But he will need two or three more races before he's in top form".

"Has a great amount of talent and a very good attitude"
Per Oleg Midtfjeld has also trained one of Norway's best horses ever, Steinlager, who won Elitloppet and made over SEK 30 million. And even though Ferrari B.R. has won 22 out of 30 starts and made SEK 1.6 million, he still has a bit to go to reach Steinlager's stats.
"Steinlager was one heck of a horse and he had an incredible year 2005. He won all the big races he was in, Oslo Grand Prix, Elitloppet. Copenhagen Cup and Forus Cup.
"Ferrari B.R. has a great amount of talent and very good attitude. He's a real winner and when he set the world record he just pulled away from the field and won by 60-70 meters. But he needs to make a couple more starts against the best to see if he can be tough enough to take the step up to face the elite" says Midtfjeld who trains at Momarken racetrack and runs a smaller stable of 14 horses.

"Post position is perfect and he's quick out of the gate"
In V75-1 on Sunday Ferrari B.R. drew post three and will be the favorite. It's a silver division race and trainer Midtfjeld is optimistic and believes he will win.
"The post position is perfect and normally he's quick out of the gate. But he doesn't need a certain type of trip, he's just as good from behind as he is on the front. Even though he's not in top from I still think he has a good chance to win. He will race barefoot, with a pull down bridle and in the American sulky. He raced with shoed behind in his last start" says Per Oleg Midtfjeld.

You also have Kamperhaugs Dina racing in Axel Jensens Memorial for mares (V75-5). What about her chances?
"Kamperhaugs Dina (V75-5) has won four out of ten starts this year and she's not too bad. She wasn't up to par in her last start at Momarken and made a break. She's in against good horses here and drew a bad post, post seven. She's very dependant on a trip so she can use her speed at the end. She will need lots of luck here but normally it will be tough for her from that post position and I'm happy if she makes money".