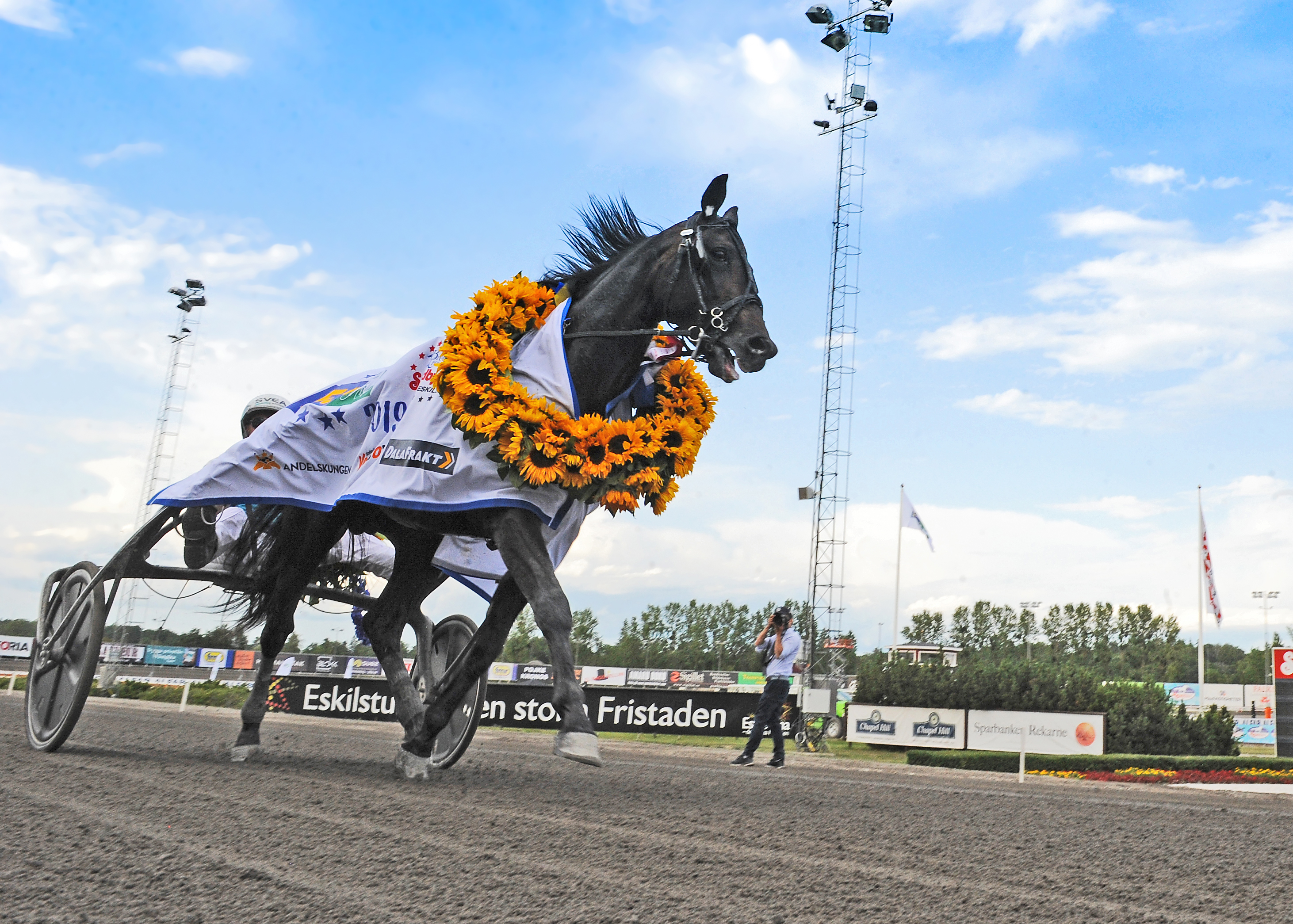 V75®/double jackpot: Aetos is the horse to bet in the E3 final

Aetos Kronos is one of the best three year olds in Europe and trainer Jerry Riordan doesn't mind him being the favorite in this Saturday's E3 final over the short distance.
Better than being viewed as having no chance, the Halmstad licensed trainer reasons.
"He has the speed, the stamina and the attitude which together make him a top trotter and of course we have to be optimistic".

This summer Aetos Kronos has set two world records and according to his trainer he's just gotten better with every start.
The victories in the three year old elite and in E3 over 2,140 meters seem to be followed by more. In last week's E3 eliminations over the short distance he once again proved that he's the horse to beat and he's the obvious favorite in this Saturday's final.
Aetos Kronos now has the chance to win this year's third big race - now in E3 in Örebro over 1,640 meters.
Trainer Jerry Riordan reports that his horse is stil in good form.
"He's healthy and happy. Even though he has accomplished more than I had thought he would, he's just getting better and better with every start" the Halmstad trainer says.
Pekka Korpi and Mascate Match will be the favorites in the filly division which will go as the second leg of V75®. V75-6 is the final for the colts and geldings where Jerry Riordan's Aetos Kronos is the horse to beat.
Johan Untersteiner drove him to victory in the three year old elite at the Elitlopp weekend and he also sat behind him at Bergsåker where Aetos Kronos impressed once again.
From post eight behind the gate Johan was able to take the lead after a few hundred meters to win easily. His 1:11.1 was the fastest time in the eliminations.
"Aetos was good again. Johan said he was far from tired" says Riordan.

"I have a lot of faith in my horse"
There were no payouts for the six and five winners picked pools on V75 last Saturday. Therefor this Saturday in Örebro, V75 will have a double jackpot with SEK 60 millions to one potential winner.
Torbjörn Jansson will start from post one with Sten O Jansson's Belker. Erik Adielsson from post two with Svante Båth's Global Adventure.
"Belker wasn't himself in the start prior to this but showed that he's back now and will probably be even better this time. We know Global Adventure is a very good horse, a fast horse. But I have a lot of faith in mine" Jerry Riordan says and also delivers an equipment change.
After having raced with a blind bridle, Aetos has matured enough to race with a can't-see-back bridle so that he can see his opponents better. He will race barefoot all around again as he has lately.

"Not the best choice of tactics"
Aetos Kronos has not been known to leave very quickly. Coincidences according to trainer Riordan.
"He could leave very quickly if Johan would ask him to. But I don't know if that's the best choice of tactics this time, really. But that's all up to Johan. I never tell my driver how to drive, I just tell them how my horse feels in training and such" says Jerry.
And the son of Bold Eagle does feel good in training. When this interview is being done on Monday, this Saturday's big favorite has just been out for some light training. On Wednesday he'll get some tougher training.
"It will be two times 2,400 meters, with a 45 minute break in between. I'll go 1:30 speed the first 1600 meters and then a little faster but never faster than 1:16 speed. He's got a tremendous attitude towards his job, he has really matured a lot between the two and three year old year. He has a great pedigree and he's got every chance of becoming a very good horse and so far he just keeps getting better with every start he makes" says a pleased trainer.
He has only made a break once, as a two year old.
He got in too much traffic in the first turn that time and it wasn't his fault that he made that break. No, he's a real trotter. He's a smart horse and a fighter. When he's next to another horse he really wants to beat it!"

"He was incredible then"
The trainer has thought highly of his horse since the beginning. That he's a top trotter was according to Riordan proved when he won the E3 final in Eskilstuna and took a tenth of a second off his own world record over 2,140 meters.
Despite a tough trip he won in 1:11.8 over 2,140 meters.
"I thought he was incredible then. The ones on the front end were able to go so slow and had a huge advantage but the power he showed really impressed me. The best part was that he came out of that race even stronger. I'm very optimistic regarding his future" says Jerry Riordan.