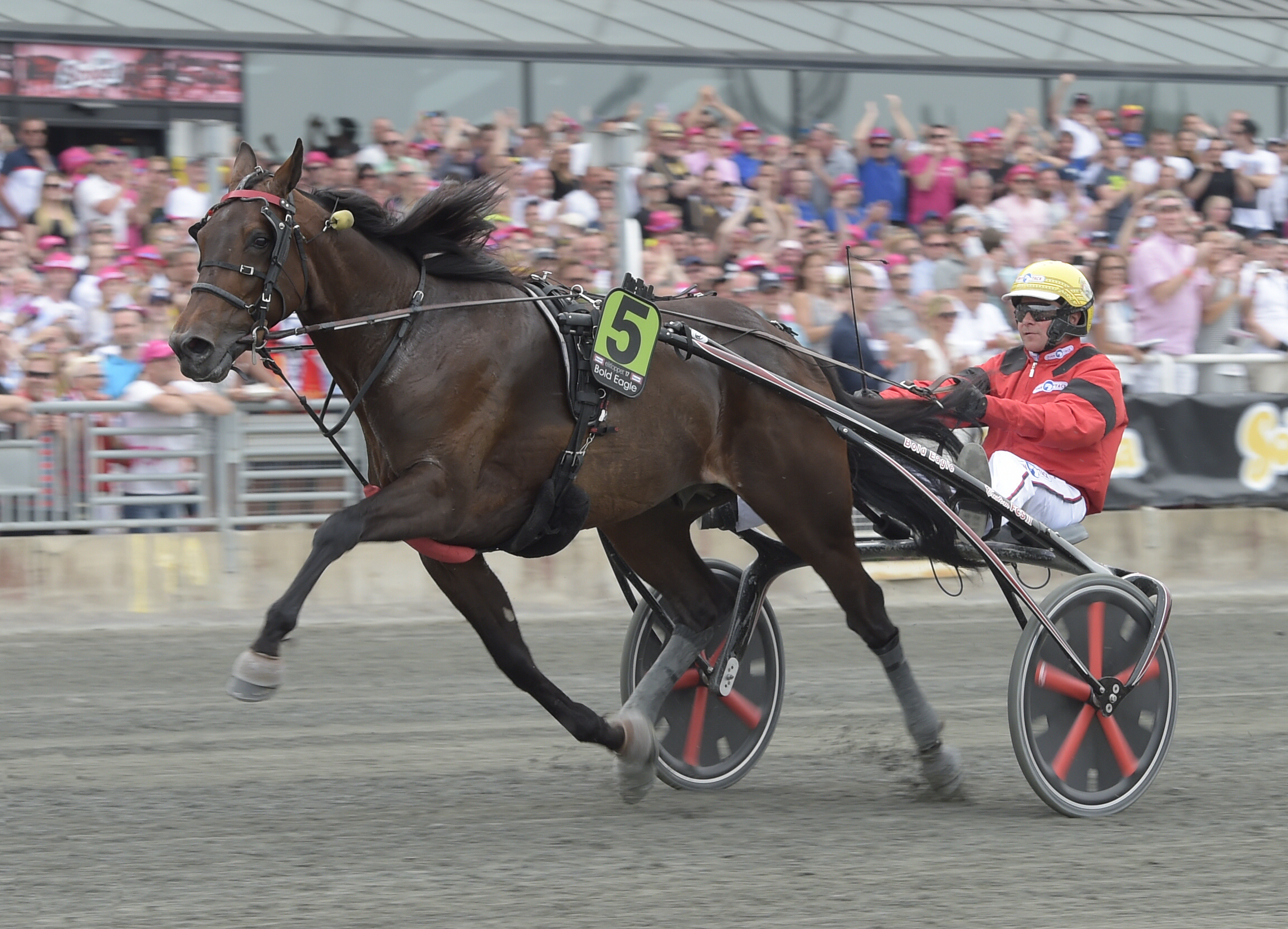 V75®/Elitloppet: Bold Eagle back to complete his mission

Last year he trotted faster than the speed of light but lost as the huge favorite in the final.
On Sunday the French phenom is returning to Elitloppet for revenge.
"We get the chance to start over, with the same conditions as last year and it feels great" says Bold Eagle's charismatic owner Pierre Pilarski.

Bold Eagle's crown doesn't sit as steady as it used to.
After winning Prix d'Amerique two years in a row back home in France he had to settle for second behind Swedish Readly Express last winter. And in Elitloppet last year he didn't get the job done and finished fourth in the final. That was after what might be the most impressive race in the history of Ellitloppet when he crushed world champion mare Delicious U.S. and won in a new stakes record 1:08.4, but that was not much of a consolation for trainer Sébastien Gurato and owner Pierre Pilarski when they left Solvalla.
"Last year we felt that we didn't fulfill our mission with him and we're very excited to get a second chance. You don't always get that in life and we're going to give it all we have" says Pierre Pilarski.

An ambassador for harness racing
We are meeting the fast food businessman/horse owner at the thoroughbred track Hippodrome d'Auteuil. Lately he has found an increased interest for the thoroughbreds but its with the trotters he has been involved for many years. Since 1994 to be exact, when the first trotters was purchased. Side by side with his successful career as a McDonalds franchiser the horses have always been with him and he has won a few races as an amateur driver. But it's as the humble and outgoing owner of Bold Eagle Pierre Pilarski has become famous in the world of racing. He's often described as an ambassador for the sport of harness racing.
"I have an incredible chance with this horse and I feel that I have a job to do for everyone making sure that harness racing still exists. I really feel that I have a mission for this business. I feel that I have to share, if not I would be too selfish" says Pierre Pilarski who for the second year in a row is lending a helping hand to the non profit organisation Stall43 at the Elitlopp weekend.
The organisation offers a chance to interact with trotters and last year they sold t-shirts donated by Bold Eagle's owner. For the money they have built a racetrack and riding arena at the farm in Norrtälje. This year Pierre Pilarski are donating baseball caps for the organisation to sell at Solvalla this weekend.

More humble this year
We are concluding this interview at the thoroughbred racetrack where three year old Fiumicino comes in fourth in the steeplechase race Prix le Parisien.
"It was his second career start and if the trainer is happy, then I'm happy, because honestly I don't know very much about thoroughbreds" says Pierre Pilarski with a smile before we continue our conversation about Elitloppet.
"In that type of race, with two heats, you really need to have a well functioning team behind the horse. People said the horse wasn't on top of his game last year, but we were the ones who weren't on top of our game".
The plan the Bold Eagle team has this year is to not go quite as fast in the elimination and also change the routines between the elimination and final. Last year they gave the horse a shower after the elimination, something they won't do this year since they think that made the horse think he was done racing for the day.
"When we came to Elitloppet last year we had won the Triple Crown in France (Prix d'Amerique, Prix de France, Prix de Paris), we had won Prix de l'Atlantique and we felt unbeatable. This year we are more humble and I think the team will be on top of their game this year".

"It feels super"
The rapports about Bold Eagle's form are all positive. He has made two starts this spring. In March he won Criterium de Vitesse in a new stakes record, 1:08.9 and in his last start he once again won Prix de l'Atlantique from the lead.
"I don't think we could have him any better than he is right now. If we get defeated in Elitloppet it will be by a horse better than ours.
Pierre Pilarski is on live TV in Sweden from Hippodrome d'Auteuil through a video call when the post positions are drawn for Elitloppet. Bold Eagle draws post position five in the first elimination and when Pierre Pilarski ends the video call he cracks a big smile.
"That's the same post position he had last year when he won in record time and it's also the post position that Timoko had when he won the final so I was secretly hoping for number five. We get the chance to do it all over, with the same conditions as last year and it feels super!"