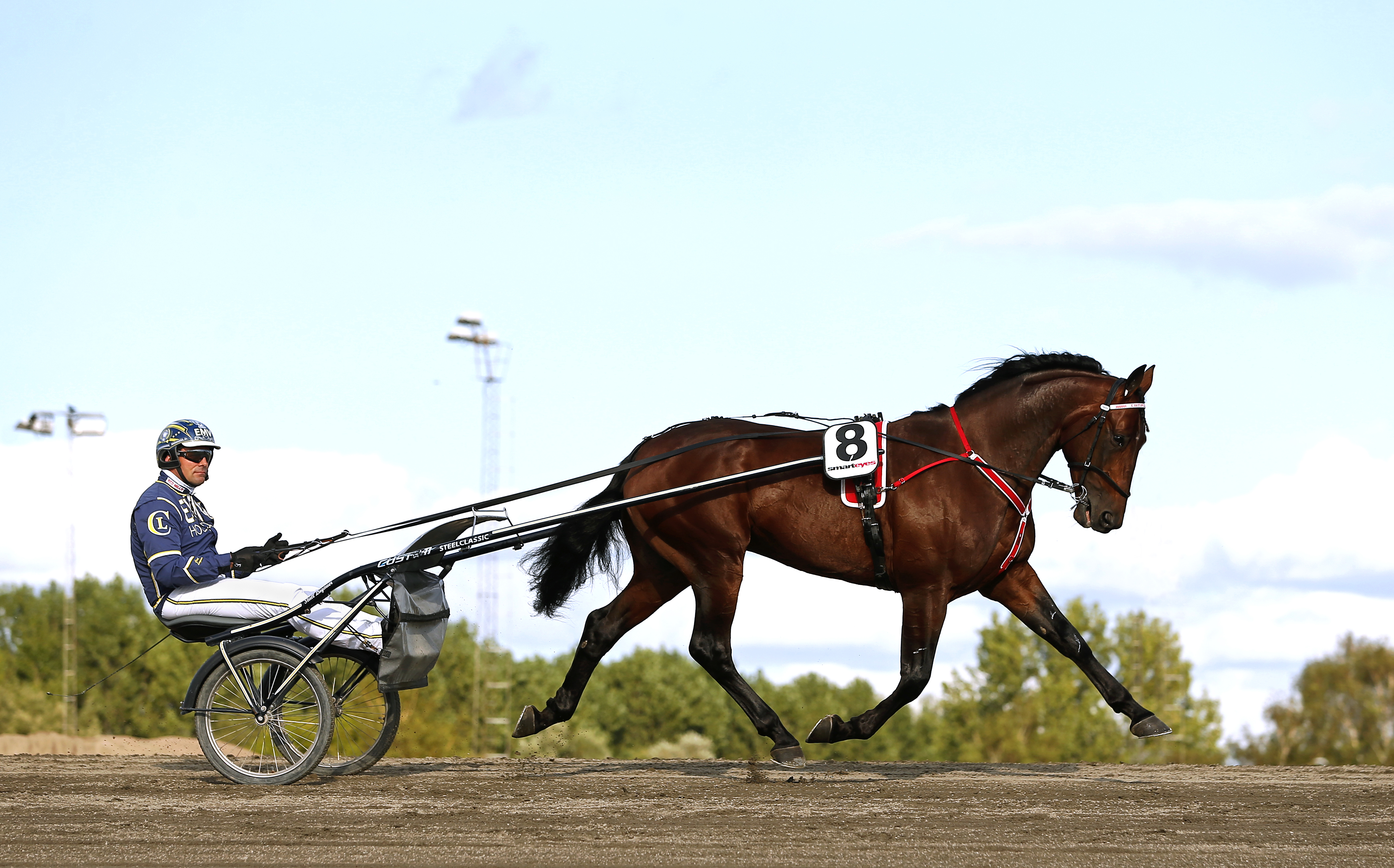 The super star is back.
This Saturday's V75® races are featuring the hometown poster boy Campo Bahia, who with this race starts his journey towards Prix d'Amerique.
"For the horse it's a race with almost no value. But nobody needs to worry that I will fall asleep in the race" says Conrad Lugauer.

Very rarely, if ever, has a horse been born on Swedish soil with such raw talent and charisma as Campo Bahia.
After having shown tremendous speed mixed with making breaks he got his breakthrough when he as a three year old won at Solvalla in 1:12.2/2,140 meters in his fourth lifetime start.
He followed that up by winning his Kriterium elimination impressively, but had to settle for second in the final after a tough trip.
After a winter of training the four year old horse returned in great shape, winning the King's Trophy in an amazing 1:10.6/2,140 meters - a national record for four year olds.
After a scheduled period of training over the summer he toyed with his opponents in his Derby elimination and was the huge favorite in the final.
Then came the set back.
The horse was not himself and was tired already with 500 meters to go, even if he got a tough trip following an early break.
His revenge was meant to come in the Grand Prix de l'UET, but he was scratched out of the elimination a month later.
"He had another cold, same thing that also bothered him in the Derby. That time the bad luck was at a maximum since he must have caught it less than two days prior to the race which made us never discover it. We did discover it after the race when the horse's heart rate was elevated more than usual" says Conrad Lugauer and clears up the chain of events around the sickness.
"The horse catches a virus, which makes his form decline, after that he recovers and at that time mucus is being produced which needs to come out. It's a total of ten days from the first day he gets sick to when you can resume training again. Before the Grand Prix de l'UET we saw it in time so all we could do was to scratch the horse and just wait it out".

Not as sharp
On Saturday it's time for the first start in almost three months in Johan Jacobsen Memorial for three and four year olds, going off as V75®-1 on this jackpot card where a sole winner could take home SEK 40 million with all seven winners picked.
How have the preparations gone for this race?
"We had to start over with the training, but after that everything has gone well. He's in great physical shape, but he's not as sharp as he was before the first start this year or before the Derby elimination. Then he had been in schoolers at Jägersro since I wanted to have him in top form. Now I have trained him in the uphill track at home plus some intervals on the straight track. He's in the same shape as he was before those schoolers where he trotted 1:12/2,140 meters without any problems, with the help of the starting gate".
The fact that Campo Bahia has only raced in 'volt' start once and made a break in the start is nothing Lugauer sees as something to worry about for this start.
"That was a long time ago when the horse had zero in earnings and zero racing experience. He's a different horse now. I'm very confident in him and the post position is the best possible so no, I don't worry about him making a break".
What about equipment for this start?
"The usual, aluminums all around and open bridle. But I might leave the pullout string off of him this time. I've only pulled them twice, in the King's Trophy and the Derby".
How important is it to win on Saturday?
"For the horse it's a race with almost no value. He's a group 1 horse and we are aiming for the biggest races with him. But it would be a lot of fun to win and I'm anxious to see how he performs, with the future in mind".
Does that mean you will race him more conservatively on Saturday?
"No, I assume that my horse will race at his maximum potential and I will drive him accordingly. If the pace is slow, which by Campo Bahia's measurements means 1:14-1:15 speed, I will get signals from my horse to go forward. If the pace is high, we can sit and wait and get them at the end instead. He's better than the other horses and I will have to drive him accordingly" says Lugauer whose next goal is the four year old race Criterium Continental at Vincennes on December 22.

Wants to race in Prix d'Amerique
Awaiting him there is most likely the first battle with the French super star and Prix d'Amerique favorite Face Time Bourbon.
"If Campo Bahia makes me happy on Saturday and recovers well after the race that will be his next start. I had planned for a start in between but I haven't been able to find any race that fits him".
How do you think he will like Vincennes?
"I think that track will fit my horse like a glove. If there's one little micro weakness the horse has, he thinks the turns on Swedish tracks are a bit tight. It's because of his big gait, he covers a lot of ground. At Vincennes that won't be a problem. I have won a few races there and I know what type of horse is needed at Vincennes and Campo Bahia is the right kind. He has it all. Besides being very strong, he's also very quick. His max speed is very high. The only thing that worries me is the French 'volt' start, not because I think he might make a break but I don't know how fast he can leave like that".
The winner of Criterium Continental receives a ticket to Prix d'Amerique and Lugauer makes no secret about that being the goal of the winter.
"If everything goes as planned and he qualifies, we will race him in Prix d'Amerique. That's also when I will pull his shoes for the first time. This is a horse who's supposed to race against the elite horses. Should my horse perform the way I want him to, but not win the Continental he will make one or two more starts down there. There's a race for five year olds in January, it's just a group 2 race but the money is good. Should he not perform the way I expect him to in the Continental, then he will get a rest. Whatever happens, the plan is for him to do some breeding in the spring".
Does that mean that you are not interested in Elitloppet 2020?
"Correct, that is not part of the plans. It has to be another year in that case".

This is what Conrad Lugauer has to say about 8 Calvin Borel in V75-6.
"He interfered behind the gate in Denmark in his last start and we will change the shoeing for this start, to an open toe so it won't happen again. He has always struggled with his gait and you can't really trust him, but he's training well now and he's in top form. When he won at Enghien back in the summer he was able to set his own pace in the lead, which is an advantage. He's just as good now and in the lead he could probably trot 1:11 on Saturday, but there's no chance of him getting the lead from his post position. These conditions make me lay a bit low with him, if he can stay flat and make some money I'll be happy".