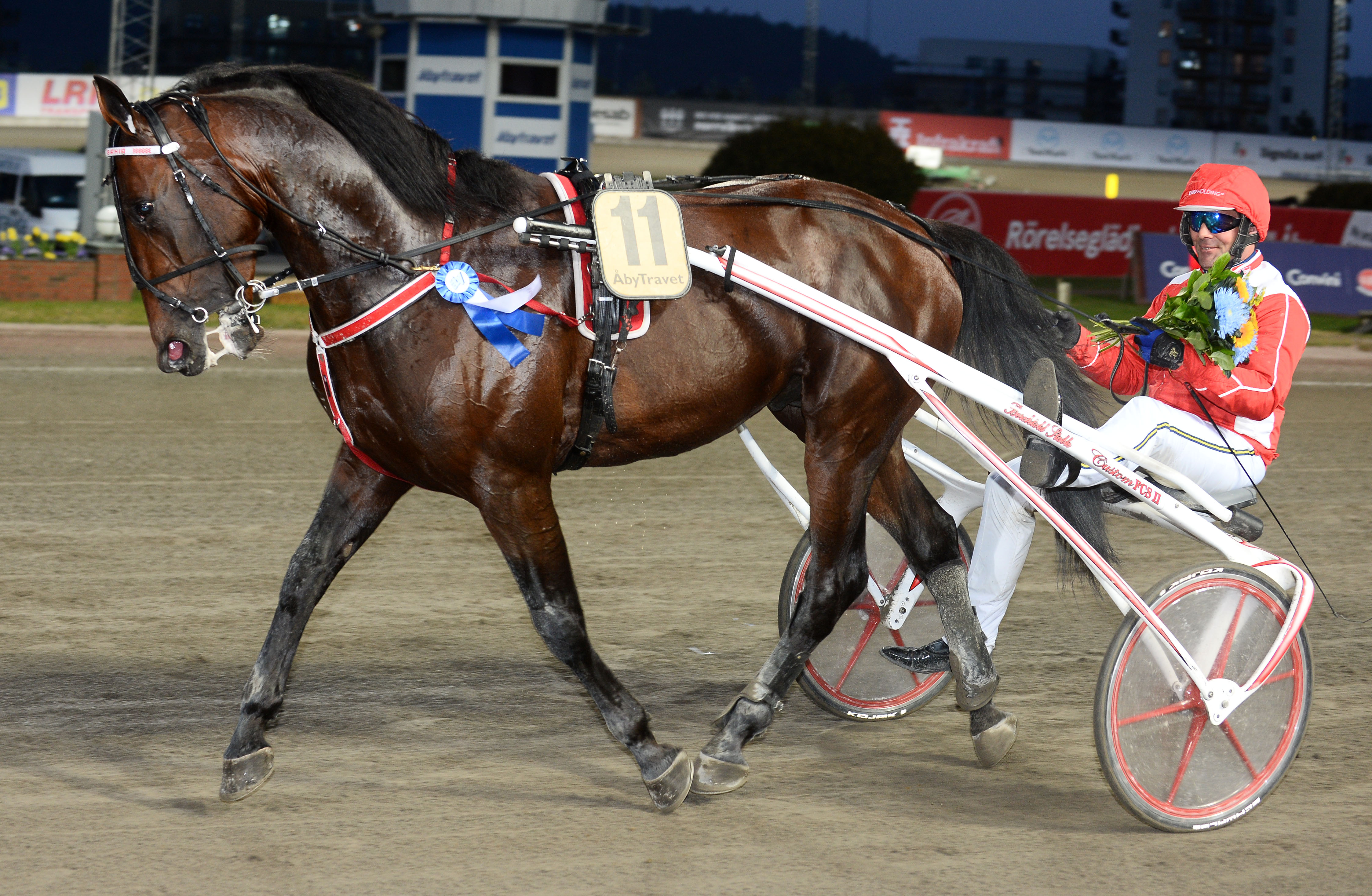 V75®/jackpot: "He is like Messi and Ronaldo - simply better than the others" ​

Campo Bahia has been incredibly impressive and the four year old star will be the favorite to win the King's Trophy.
Trainer Conrad Lugauer is praising his talented trainee.
"He is like Messi and Ronaldo, can do things the others can't. I'm convinced that he will win. My horse is simply better than the others" says Lugauer.

The first stake races of the year for the four year olds are here. On Saturday the finals of the King's Trophy for the horses and geldings and the Queen's Trophy for the mares will take place at Åby. V75® is further spiced up with a jackpot where a sole winner is calculated to take home SEK 50 million. In the King's Trophy, Campo Bahia is the favorite to take home the SEK 1.15 million first prize. This extraordinary horse who is bred and owned in part by Conrad Lugauer showed already last year as a three year old that he's a very talented horse. He finished second in the Swedish Kriterium, the richest race for three year olds in Sweden, after a tough trip. This year he's made two starts so far and been very impressive when winning both. Trainer Lugauer compares his super star, who so far has earnings of SEK 2.6 million, with football icons Messi and Ronaldo.
"Campo Bahia is a horse who can do things many others can't. Just like Messi and Ronaldo can do things that other football players can't. Plus, the horse has an incredible charisma. You can see that he's a star" says Conrad Lugauer.
The Jägersro trainer continues:
"He has that knockout effect which a lot of horses don't. He can knock them out in 200 meters and he can torture them over 700 meters until they surrender".

"He knows when to focus"
How has Campo Bahia developed since last year?
"He trotted a low 1:12 at Solvalla already in his fourth lifetime start but has developed quite a bit during the winter training. Even though my horse raced really well last year I had the feeling he didn't focus on the right things. He knows when it's business now and he knows when to focus. He's gotten more experience and he feels safer. The way I see it he has matured mentally and he understands this is professional business" says Lugauer.
"He's been a promising horse since he was two years old but that he would be the favorite to win the Kings Trophy and the Derby is something we of course didn't know. But when Marc won with him in 1:13/2,100 meters in his second start and when I won with him in his fourth start when we were only 1/10 of a second off the world record we understood he was a star".

"Wasn't tired in 1:12.1 in the elimination - great effort"
Campo Bahia started this year by winning at home at Jägersro. He did it after making a very costly break in the first turn. Despite that he came back and won very easily in what was a fantastic effort. In his last start in the Kings Trophy elimination he won easily after having advanced up outside the leader early.
The winning time was 1:12.1 over 2,140 meters which made him the fastest of all elimination winners.
"The break two starts ago came because he got lonely on the lead and relaxed. I wanted to try to leave hard with him before we get into all these big races so I know how fast he can leave. Now we know where his limit is".
"In his King's Trophy elimination he won without being tired despite starting in the second tier and moving up outside the leader. It was just as I had expected - a great effort".

How does he feel in training after that start?
"Very good. I trained some intervals with him today (Monday) and he felt great. He felt loose and strong and really sharp. I think he is more professional now than before. It's great for me as the trainer to feel the horse this good".

"Post position three is our dream post - don't want to take any chances"
You got to pick your post position first of the elimination winners and you picked post three. Comment?
"I'm completely convinced that my horse will win and that's why I don't want to pick one of the inside posts. The margins are small and I don't want to get into any positioning war going for the front. When you have a horse with a long stride like Campo Bahia there's a bit of a difference between the posts from one to five. If you have post one or two the horse can get a little nervous too. Then it's better to be a little bit further to the middle of the track. Post five is actually the best one where you get an even acceleration from the car and you have a good speed at the start compared to posts one and two".
"But post three is our dream post and we would have chosen that regardless of what our opponents would have chosen. My horse is simply better than the others and then I don't have to take any risks" says Lugauer who singles his horses in the V75 Expert Picks.

"If they won't let us go they will have to pay the price"
How do you look at the race and the tactics?
"If someone won't let Campo Bahia go they will have to pay the price, let me tell you that much. I have the utmost respect for Attraversiamo, who I think is a wonderful horse but I wouldn't swap horses. I think my horse will beat him on the outside if he needs to".
"We all know how racing is and anything can happen. But why would I be timid when I have such a great horse? Deep down inside I'm convinced my horse will win, so why shouldn't I say that? I really hope it will be a good race for all the horses and may the best horse win".
Are you making any shoeing or equipment changes?
"Yes, he will race with pullout earplugs for the first time. We tried it in training today (Monday) and it gave the perfect effect. I really want to win this race and it's good to have that extra gear if needed. Other than that he will race with shoes and in the same sulky as usual. We'll wait to pull his shoes until Prix d'Amerique" Lugauer says with a laugh.

Another finalist in the King's Trophy
The Jägersro trainer has had a brilliant start to the year and has won 44 races, earned SEK 3.6 million and his win percent is almost 30. He has three more starters on this Saturday's V75 of which one is another finalist in the King's Trophy. Here is what 'Connie' has to say about them:
"Harran Boko (V75-2) trotted 1:12.2 when he won two starts ago and he feels just as good now. We can forget his last start. It was too tough going 1:09 the first kilometer. Judging from how he feels in training I don't think he's down in form after his last start, he feels great. He races well from behind too, which he will prove soon, hopefully already this Saturday. No changes".
"Gambit Brodde (V75-4) made two breaks in his last start at Örebro which he normally doesn't. The track was a bit too hard for me and I think that didn't really fit him. He felt as good as he possibly could in the warmup and I couldn't find anything wrong with him in training today (Monday). He felt good and as alert and happy. He can leave well, has a good post and he likes 1,600 meters. He can race on the front and he can sit behind, so we have options. If he stays flat I'm sure he's one of the horses who can win. We'll switch to a blind bridle this time".
"Ferrari Sisu (V75-7) was no surprise to me in his last start when he went through to the final. I was very happy with him. We thought he would and Marc drove him accordingly. He wasn't far behind after going first up and this time he'll get an easier trip as he's in much tougher. I'm convinced he'll get some good money here. He will race in an American sulky for the first time" says Conrad Lugauer.