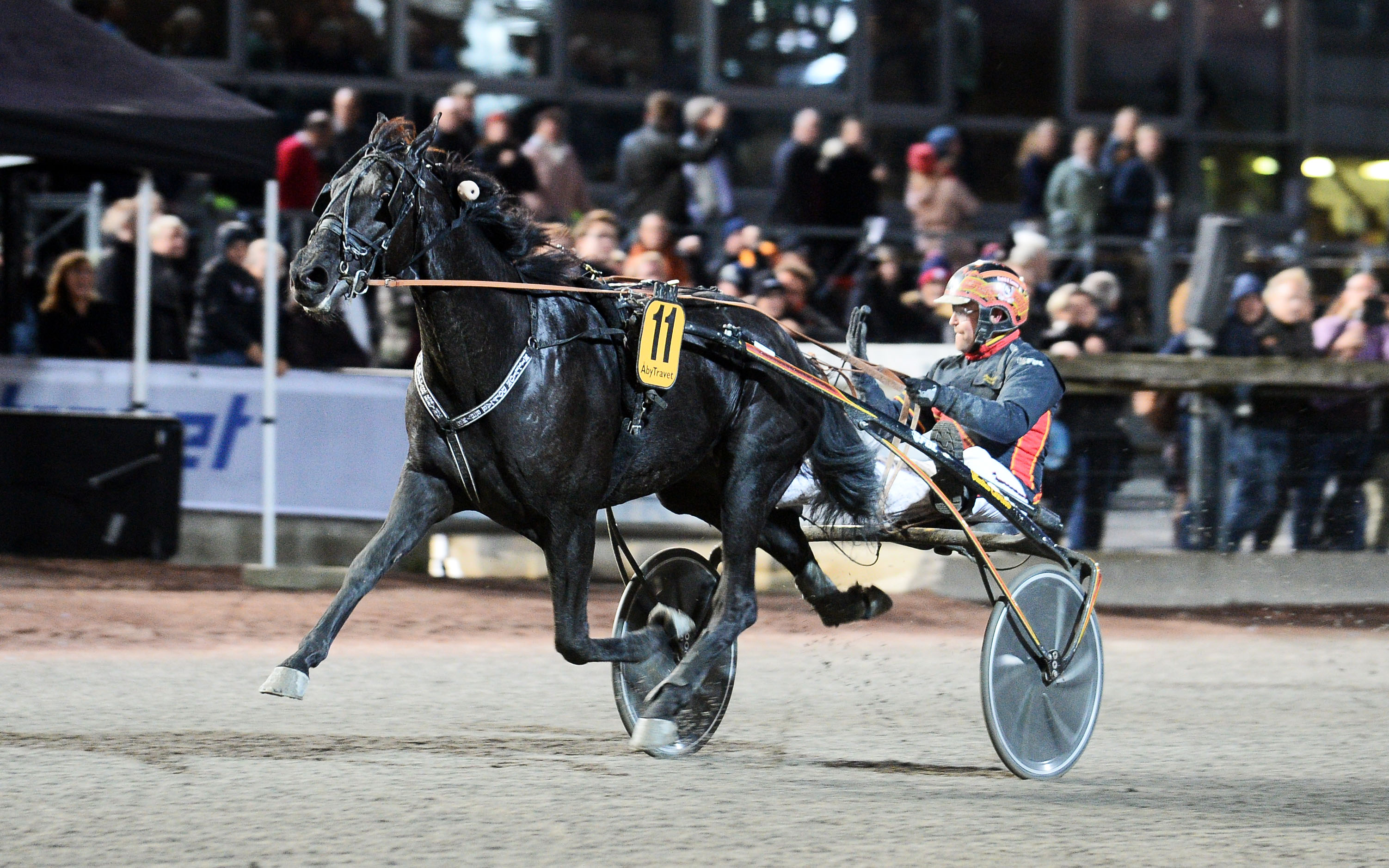 V75®/jackpot: Larsson's diamond out of the rough

Last year he took the step into the trotting elite.
He showed in his seasonal debut that the winter training has been successful.
From a perfect post position and with the form indicator pointing straight upwards Milliondollarrhyme can win the biggest race so far in his career in the final of the Paralympic Trot.
"If he gets a good trip he will be in the photo" says trainer/driver Fredrik B Larsson.

On Saturday Milliondollarrhyme returns to Åby where he last fall crushed his opponents in the Swedish Championships after a fabulous finishing speed. This time a first price of SEK 1 million is on the line in the final of the Paralympic Trot. Milliondollarrhyme was given a wild card after a strong effort in his strong seasonal debut.
"I was very happy when we received the wild card. He feels so good after that race and he's on his way up in form,that it will be very interesting to race him there" says Fredrik B Larsson.
That seasonal debut took place in the third leg of the Paralympic Trot at Romme on April 12 where Milliondollarrhyme delivered an impressive finish three wide. Already with 800 meters to go he had to attack from fourth over and despite the fact that Elian Webb and Sorbet were able to go the first kilometer at a very slow 1:16, Milliondollarrhyme was able to make up several lengths on them to finish third.
"I was happy with his effort. He needed the start and he was a bit rusty but he was calm, loose and relaxed. The conditions with the rain and the sloppy track were tough but he raced well without being in top form".
To be able to trot in 1:08 speed the last 800 meters, three wide and on a sloppy track in the first start of the year says something about Milliondollarrhyme's abilities...
"Yes, but he is that kind of horse who can trot freaky fast and he's good at trotting the last 700 meters very fast. Like I said, I was happy with him and he feels good in training after that start".

Confident and relaxed
When we reach Fredrik B Larsson right after lunch on Monday he has just been ut training the apple of his eye.
"It feels like he's on his way up in form after his last start. I won't do anything to get him sharp for this start, I will train the way I usually do and rely on the starts he makes to make him better. I focus a lot on keeping him calm and collected. That's the alpha an omega to him being successful on the track".
What is the difference between now and when you put him away before the winter?
"Hard to say. He was very sound when he closed out last season and he got a full month off in the paddock. Just like last year, he has trained very well all winter. It's hard to say if he has gotten any better but I hope so".
You have referred to him as a diamond in the rough. Is he out of that rough now?
"Yes he is. He was already at the end of last season. He has become a good racehorse and the hot temper he used to struggle with has gotten better and better. He is much more confident and relaxed when we go to race him now".

"Hope to be battling for the victory"
V75® comes with a jackpot this week where the pool for all seven winners picked will be around SEK 60 million and from post position five in the seventh and final leg, Milliondollarrhyme has every opportunity to be a deciding factor in how the millions will be divided.
"We have a good post position. That's the first good post position in a long time for him. I hope we will get a good trip and then we'll see how far that will take us. It's a very tough race but he feels so good, that I hope to be battling for the victory. if he gets a good trip he will be in the photo".
Milliondollarrhyme will as usual race with shoes and in a regular style sulky. Fredrik B Larsson is saving the extra gears like pulling the shoes and racing in an American sulky for later. Maybe for Elitloppet last Sunday in May where he finished fifth last year.
"The Saturday race is important but the most important race for him is Elitloppet, which is the main goal early on in the season. The thought is for him to be in top form then and for that to happen he needs a couple more starts first. But he is good enough to race well already now".