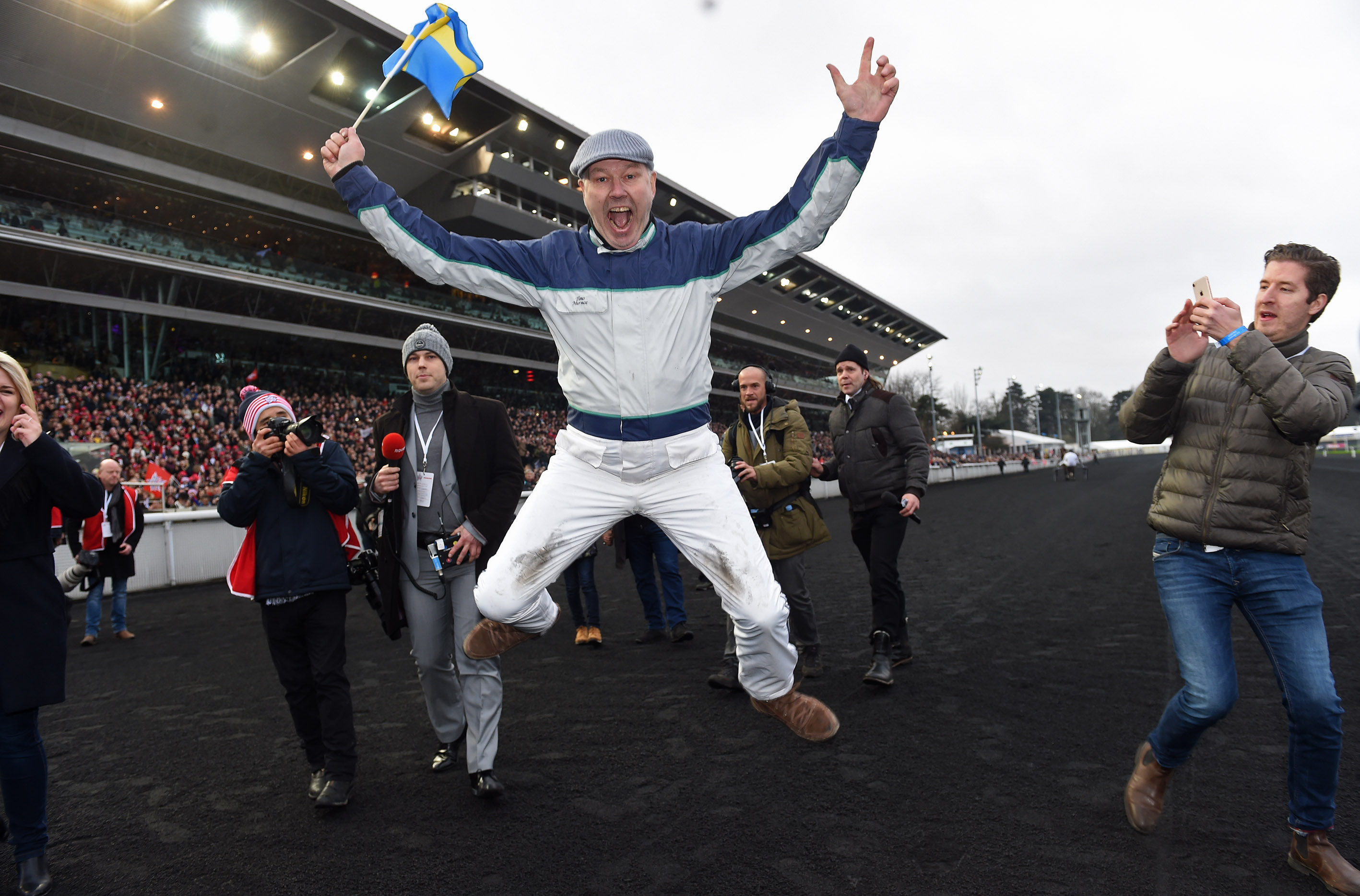 With an egg sandwich and a glass of milk Timo Nurmos celebrated the Prix d'Amerique victory after arriving home to Sweden in the early hours of Monday morning.
After all the attention at Vincennes where he was celebrated by a crowd of 40,000 he just wanted to relax.
"I felt like a rockstar at the track. But I'm not satisfied with what I've won so far. I want to win more big races like this" says Timo Nurmos who has a coupe good chances on this jackpot V75® this Saturday.

Winning driver Björn Goop along with many Swedish fans celebrated Readly Express's Prix d'Amerique victory at fashionable Parisian restaurants Sunday night. Meanwhile Timo Nurmos was on a plane home to Stockholm with his wife Raili and their son Olli. It was booked at 9.30 pm already ahead of the race and Timo wanted to come home and enjoy the victory in the peace and quiet of his home.
"It was almost 2 AM by the time we got home, 2:30 AM before I fell asleep. There was a lot of stress and tension all day and a lot of commotion after the race too. Such an amazing feeling, I was so geared up. But during the evening there was a feeling of emptiness, when it was all over. I was tired and I had been away for the entire week in France. I talked to Björn Goop during the evening and he said he kind of felt the same way" says Timo Nurmos.

"Tea and macaroons on the plane"
"So it was actually nice to go home. There was some great celebration in the winners circle and kind of chaotic afterwards. We also had some champagne in the dressing room and in the cafe in the stable area after that. There were security guards escorting me everywhere. I'm not really used to that. Made me feel like a rockstar ha ha".
No victory dinner on the plane ride home then?
"No, just a cup of tea and some biscuits. Those French macaroons. I had an apple too. I hadn't had anything to eat all day since breakfast, it was full speed all day. But when I came home I made myself an egg sandwich with "Kalles" caviar and took a glass of milk. I did the same thing after winning the Kriterium with Villiam so maybe I will make it a tradition" says Timo Nurmos laughing.

"Starting to sink in that we won"
The Solvalla trainer has spent Monday at home in his villa in Tullinge south of Stockholm and has placed the Prix d'Amerique trophy by a window.
How does it feel now the day after?
"It's starting to sink in that we won. Your body relaxes. I'm used to getting up early and even though I went to bed late I woke up early and got up. My phone's been ringing non stop and I've been on the phone pretty much all day. Journalists from all around the world has called me and people from everywhere has called to congratulate me. I've gotten hundreds of text messages, well i haven't counted them but there was a lot of them and I've tried to reply to each and every one".
"I usually never watch replays of big races a lot. I don't wanna stay in the past, I want to move on. But today I've watched Prix d'Amerique a few times. I wanted to get a better view of the start".
"And I've been away for an entire week, spending all of last week in France with Readly Express. That was also a part of why I wanted to go back home. I haven't been out to the farm today, I've been home catching up on paper work and answering the phone all day. But tomorrow I'll be there training horses and tomorrow night we're racing at Solvalla".

"Björn didn't realize he won at first"
If we go back 24 hours to the race and the moment when Readly Express wins Prix d'Amerique.
What do you remember and what did you feel?
"I stood right by the big gate to the track and didn't see all that well so i had to look at the big screen. There was a lot of noice and a lot of people and there's so much noice even in between the races there. When the horses were coming down the stretch, I saw them head on so it was hard to tell who won but on the big screen I saw that Readly finished first".
"Björn was so focused on the race that he didn't realize that he'd won at first. Not until Frank Nivard congratulated him. Björn stayed by himself with the horses for a bit before he came over to me and when I sat down on the bike we got a nice moment together, just me and him and the horse. We talked a little and it was very emotional. Then the big chaos came over us".
And you were so happy you even jumped around in some form of euphoric dance?
"Yes, it was such an incredible feeling. Made me feel like a rockstar there too haha, when 40,000 people are shouting and singing for you and there are flags everywhere. It was such a big joy, that's something I will never forget".

"If the last workout is good then I'm calm"
Now when Prix d'Amerique is over, what was your your feeling during the day and during the week of the race?
"The horse had been feeling great and everything had gone according to plan. Normally I always plan in advance how to train all my horses but going in to a big race I play it by ear. I always train the horse myself that last time before a big race to get the right feeling.