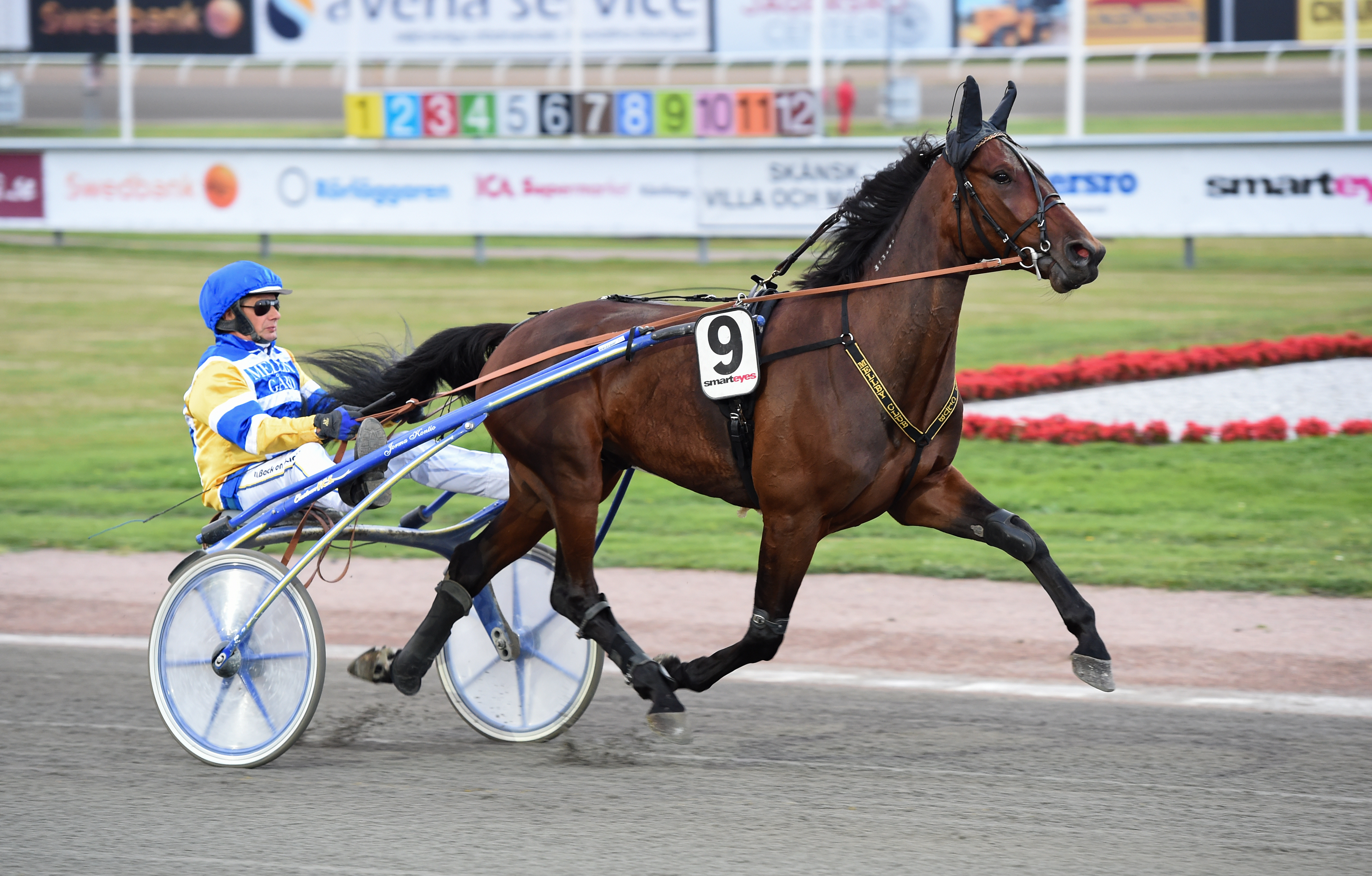 V75®/jackpot Örebro: Now the little brother can step into the Club

Mellby Viking won the test of strength Örebro International twice.
This Saturday his little brother Mellby Club can get his first victory in the race.
"He's a very nice and strong horse just like his brother and I think he will win a race very soon" says Timo Nurmos.

The Solvalla trainer just surpassed SEK 10 million in earnings for the year this past weekend. His horses has won 53 races and his win percent is 31.
Nurmos also leads the V75® standings for trainers with 15 wins and has gotten a very good start to the year.
"Things have gone well. Not just with Readly Express, many horses have done well and won several big races. We also race almost exclusively on V75 and at Solvalla" says Timo Nurmos.
Nurmos has a very exciting weekend in front of him with Readly Express racing in Finlandia-Ajo. He drew a perfect post three behind the gate and will be the huge favorite together with Björn Goop.
"That's one of the best post positions at Vermo and he feels very good in training. I trained him this morning (Monday) and I was very pleased with him" says Nurmos.

"He's a very big horse"
While Readly Express is racing in Finland (together with three stable mates in other races) Timo also has some good chances to win in Örebro. This Saturday's featured race on V75 is Örebro International with SEK 400,000 to the winner. It's a three kilometer race which has become a sort of rehersal race for Harper Hanover's race at Solvalla at the Elitlopp weekend.
Mellby Viking is one for the strongest horses Timo Nurmos has ever trained. He won Örebro International impressively twice. First time in 2014 when he just trotted around the field to win in 1:14.3. Three weeks later he won Harper Hanover's in a new Swedish record time of 1:12.5/3,160 meters. He also won Örebro International in 2016. Now the little brother will try to win the same race his older brother did.

"The longer the distance the better"
What do Mellby Viking and Mellby Club have in common and what separates them from each other?
"Mellby Club is a very big horse while Mellby Viking was smaller. He wasn't tiny, but definitely smaller than Club. They have the strength in common, which comes from their French mother (Naomi de Lou). Mellby Club has always been typically French gaited just like Viking was early on in his career".
"Viking became more stable the older he got but he was afraid of the dirt hitting his face. He got better with that as he got older too, while Club has no problems with that. Viking needed some weight and it took a long time before he could race barefoot. That's why he made breaks sometimes, a combination of his gait and the dirt hitting his face".
"Club is also French gaited but has gotten better and better. He needs some balancing help but he's good barefoot upfront. He trained very well today (Monday) and the longer the distance the better it is for him" says Nurmos.

"Will be even better now"
Mellby Club has made three starts since he returned to the racetracks and he was super in a V75 race at Mantorp when he finished second from outside the leader, made a break in the next start when there was a quick change of pace and then he finished third on V75 in his most recent start after once again having raced outside the leader.
"He's gotten some tough trips, but he's been good and have tried hard. Last time he was only beaten a length. I think he'll be even better now that I’ve gotten these three starts into him. I think he will win a race very soon".

"Can trot 1:14"
Mellby Club will start from post position two (volt start) on the starting distance in Örebro International (V75-7) and will be driven by Erik Adielsson. Trainer Nurmos is optimistic and hopes he can copy his brother Mellby Viking and win the race.
"I think he can trot 1:14 on this distance and he definitely has a chance to win. He's in against many good horses but he's also in very good form, the distance is perfect and he fits the conditions of this class very well. Post position is OK. He might race barefoot upfront and the bridle will be determined after the warm up" Nurmos says.

"Won easily without being tired - even better now"
The Solvalla trainer has three more horses racing on V75 at Örebro on Saturday. Here are Timo Nurmos' comments on their chances.
"Marvelous (V75-2) has had good form for a while but hasn't had any racing luck. I said before the race at Solvalla last time that he will win a race very soon. He won that race despite post eleven and he feels good in training after that. Unfortunately he drew in the second tier again and this time over the short distance, It's hard to win from way back at Örebro, since the turns are a bit tricky there. He will race barefoot again and with the same bridle and sulky as he did last time".
"Master Hill (V75-4) is a nice horse who had trained well for a while before his last start. He won that start easily without being tired from the second tier and he felt good and strong in training today (Monday) and I can tell he's taken a step forward after that last start. He will be even better now and he has a good post position and he can leave quickly. Post position three is one of the best post positions in Örebro. I have to be optimistic again and he will race barefoot, with an open bridle and in a regular sulky as in his last start".

"Won very easily last time- our best chance"
"Global Trust (V75-6) is a very nice horse who has been very good for a long time. He could have had five wins a row now. Two starts ago he was incredibly good as he finished second in the V75 final in 1:11.8. He won his last start very easily with the earplugs still in. He felt great in training today (Monday) and he's still in top form. He's very quick out of the gate, but he has won from every position, on the front, on the outside and from behind. He's gotten more stable since we put a different kind of trotting boots on him. He has raced barefoot, with a blind bridle, pullouts and in an American sulky the last two starts and will do so again. He's our best chance on V75" says Timo Nurmos.