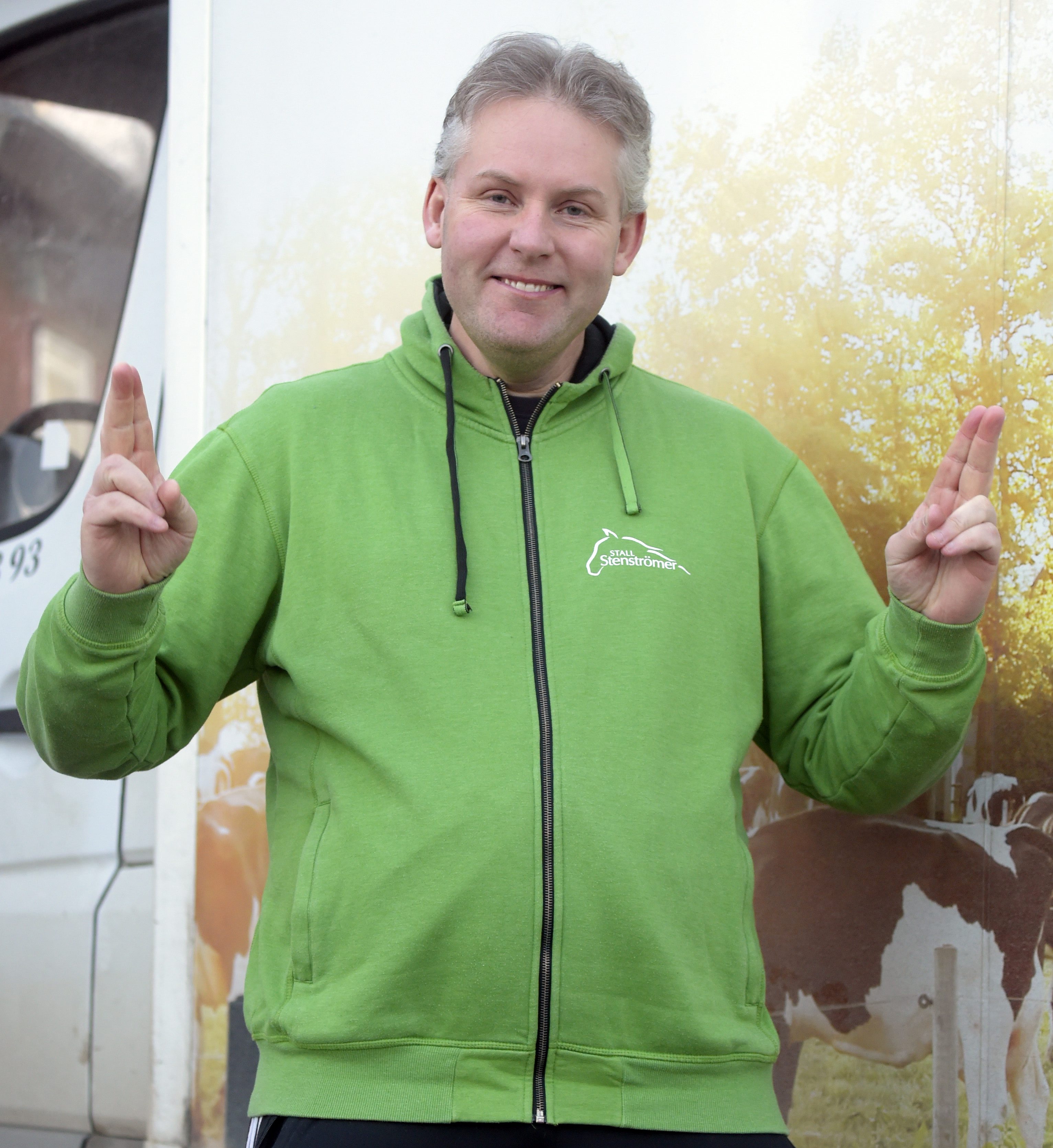 A few years ago he rapidly became one of the country's mot successful trainers on V75®.
But it came at a price.
"I didn't take care of myself at all. Now I've lost 20 kilos and I feel so much better" says Ulf Stenströmer who is sending four horses to the jackpot V75 at Mantorp this Saturday.

2014 Ulf Stenströmer introduced himself to the V75® bettors. He went from winning three V75 wins his best year to eleven that year.
The following year he kept climbing the ladder and had 16 victories on V75 and his stable grew to around 100 horses.
Today, two thirds of them are gone and Stenströmer had his least successful year as trainer since 2008 when it comes to purse money.
He wasn't disappointed with the results in 2017 though.
"No, if you look at the material I don't think we did that badly. When you lose 60 horses in two years it will show in your results. We had earnings of SEK 100,000 per horses which is about the same we had in 2015 when we made SEK 10 millions".
The reduced amount of horses caused Stenströmer to leave the big training camp Bjertorp and moved them to his own farm Vasken. Something he is very happy about.
"We have extended the farm and made it a complete training center. The latest addition is a two kilometer long trail which includes a 700 meter straight track. It's perfect to get young horses started on. Then we have the deep sand track that built Noras Bean, Your Highness and our other champions, that's where we train the race horses. The new concept is to start off the younger ones on it in the winter when it's harder and not as deep and heavy. When we had the young horses at Bjertorp they trained exclusively on the racetrack and the straight track. The crop who are three now are the first that I tried this with and I'm very happy with the result so far".

Wants to fill the stalls
As a matter of fact Stenströmer stable has started off 2018 with a win percent of 22, which they were nowhere near even during the best years.
One reason could be that the trainer started prioritizing his own health.
"When we had the most success I didn't take care of myself at all. It went as far as me getting some form of diabetes last year. That's when I started eating better and training. Racing five, six nights a week it was always burgers, fries and coke on the way home. Now I haven't had a soda in six months and my blood count is good again. I've lost 20 kilos the last three months and my friends tell me I look much better and I feel a lot better too".
Do think your stable grew too fast?
"No, I wouldn't say that. When I started 14 years ago I had 15 horses. We expanded with 10-20 horses every other year and the results kept getting better and better until 2015. I was working non stop and never took the time to stop and enjoy the success. But sure, when you have 100 horses it's harder to have full control, finding help you like working with and such. Today I'm very happy how my business works with my employees and having all the horses in the same place. The only problem is that we have 20 empty stalls".
Why is that?
"It's not just me. My colleagues have the same problem. They also complain there's no new race horses coming in. I can't force anyone to have horses in training with and I'm not complaining. If we keep showing good results, the horses will come.

"Very optimistic with him"
This Saturday four of the stable's horses are coming out on V75. Stenströmer stable hasn't has that many horses on one V75 card since the summer of 2016 which might help ending the six month long drought on V75.
Ulf Stenströmer must be longing for his next V75 victory?
"Of course you always want to win, but there's more than winning in this world. I think we've done well on V85 this winter even if we haven't gotten any wins. Sometimes you can end up with a third place finish and still go home happy".
But would you go home happy with a third place on Saturday?
"Well, maybe not. Hd Donato E. gotten post position 1-4 I would have been very optimistic with him. I'm still hopeful. Bear Dancer and Khaleesi could also end up winning but they need everything to go their way to do so. Maybe if they end up in the lead and the favorites run into trouble. It's in no way impossible that we bring home a win, the horses feel great" says Stenströmer.

Here are Ulf Stenströmer's comments on his V75 chances this week:
"1 Jula Menuett (V75-2) is the horse in the barn who's the most improved when she can race barefoot. She's just not as good with shoes and we've kind of been waiting for this start. But I do think she will need this race to get in form though. I've trained her a lot but only on the sand track, no speed. So the risk of her getting tired is quite high. Compared to last year's first start she's not as well prepared now. I hope she can just sit on the inside and hope to make some money. We've been trying different bridles and bikes on her. This time I'm leaning towards an American bike and a pull down bridle".
"6 Kahleesi (V75-2) looked good in her first start of the year but got pacy and made a break. I think it's because she got muscle sore and also raced with corks which she never raced that well on. Now she'll be better and we hope to race her barefoot, at least behind. I'm happy with the post position and she can leave well and if she gets to the front there's no reason to let anyone go. She's pretty sharp so we'll keep going with open bridle and a regular sulky. If we decide on barefoot all around it would be the first time".
"5 Bear Dancer (V75-3) raced great last time and I was very happy with him. He didn't have free room in the last turn and finished well. Now he has better conditions and he'll race barefoot and we'll do everything to try to get to the front. If he'll get there, it's up to the driver and mostly the horse wether he'll race on the front end or not, he can get a little too sharp there. He had no chance against 2 Sir Ratzeputz last time and he probably doesn't this time either but I hope racing barefoot will give full effect. He'll race with a blind bridle and the American sulky as usual".
"8 Donato E. (V75-6) has been tough to keep sound but last year he came out of the races better and kept improving. He's had a good winter and showed good form in his first start, but he didn't like the surface or the tighter turns at Örebro. Now we're hoping for a nice track so that he can race barefoot which makes him much better. He is very fast on the straightaways and even if the post position is bad, he has to try to get a position. If he ends up outside the leader I'm sure he can handle that too. He'll race in the American sulky this time. He did so twice last year and even if he didn't win I think it had a positive effect on him. Despite the bad post, he's my best chance on Saturday".