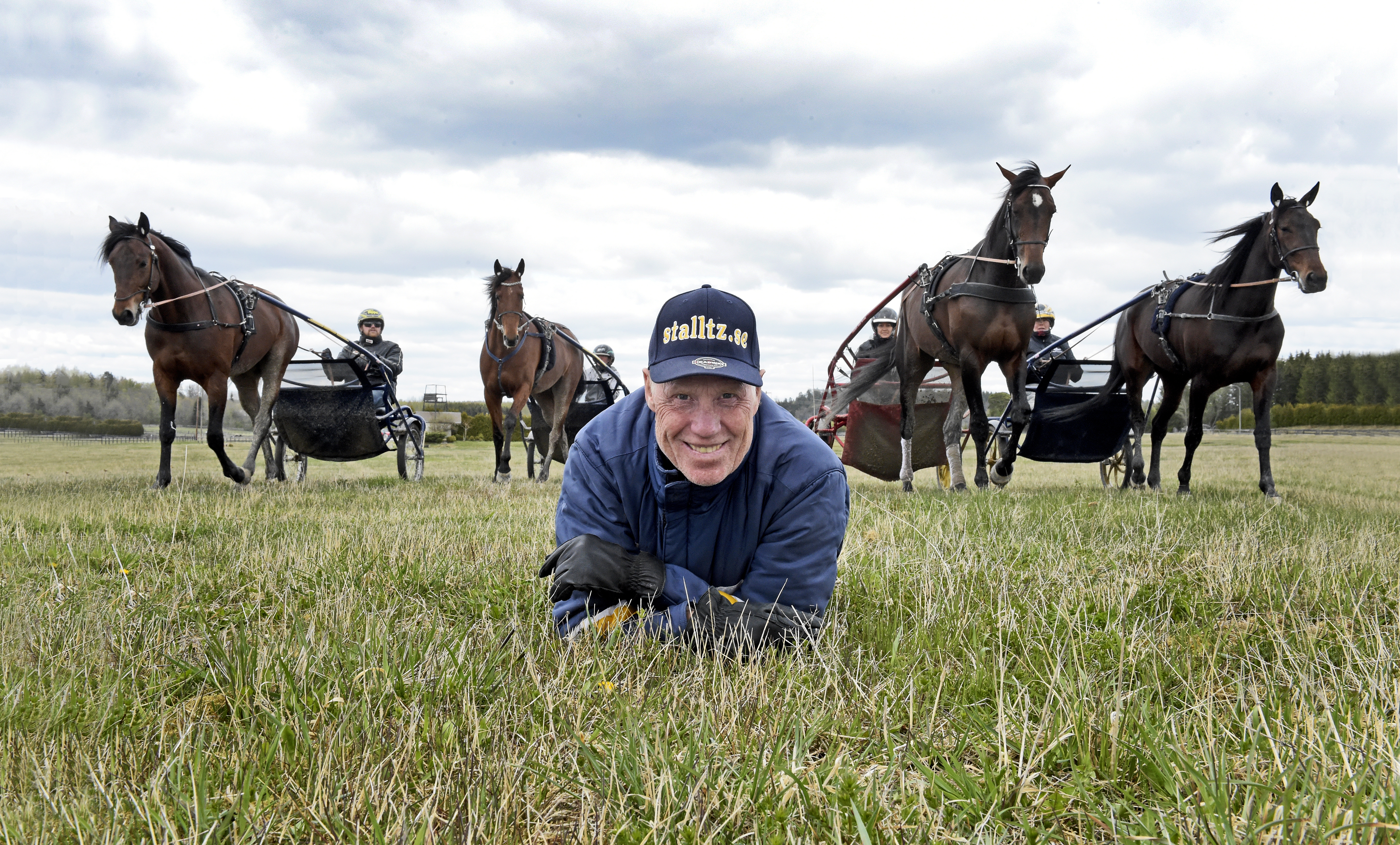 Stefan Melander has won the King's Trophy three times and the Queen's Trophy once before.
The year he trains the favorites in both divisions - and his chances to win again are pretty good.
"I have very good horses who absolutely can win. Green Manalishi takes very long strides and is such a cool horse. Ganga Bae will be greatly improved barefoot and with the blind bridle" says Tarzan.

On Saturday it's time for the finals of both the King's Trophy (Konung Gustav V:s Pokal) as well as the Queen's Trophy (Drottning Silvias Pokal). The races are of very high class as usual when the best four year olds go to battle.
Stefan 'Tarzan' Melander has won the King's Trophy three times as trainer with Lucky Po (1999), Gigant Neo (2002) and Volstead (2015).
He has also won the Queen's Trophy once with Ruby Trap (2015).
Tarzan is red hot this year since he trains the favorite in both the male and female division. The boy is Green Manalishi, who in his last start made his debut for Tarzan and the girl is Ganga Bae.

"Takes very long strides - he is super cool"
Green Manalishi already has earnings of SEK 10.2 million and was one of the best three year olds in North America last year. His biggest victory came in the Canadian Trotting Classic and he also won his Hambletonian elimination. This super talented horse finished fifth in the Hambletonian final and was trained as a two and three year old by Stefan's nephew Marcus Melander. He came to Sweden three weeks ago and he made his first start for Tarzan in the elimination two weeks ago. Guided by Björn Goop, he finished second to Aetos Kronos after a first over trip.
"Green Manalishi (V75®-7) hadn't raced for six months and raced well in his elimination. He had a long trip behind him and a lot of things were new to him. But he is a fantastic horse, which he also showed" says Stefan Melander.
Can you describe the horse and compare him to the previous star trotters you have trained?
"He is such a nice horse and you have to have a stop watch when you train him. He takes such long strides, just like Uncle Lasse did. Scarlet and Nuncio were the same but I think Lasse was the one who really just let his stride out and you couldn't tell how fast you were going. He was a fantastic horse".
"Green Manalishi will be a very good horse, well he already is. He has no problem with 2,140 meters and he doesn't count his strides. And he was born in Sweden which I think is fantastic. But he behaves like an American horse. He's such a gorgeous horse and he really is super cool. He can just stop, stand still and look around, just like Scarlet and Nuncio did".

What do you think of the task ahead on Saturday?
"It's not an easy race. It's full of very good horses but he is one of the horses who can win it. He has it all and a post position further out from the rail will help him. He also hadn't raced for six months so he should be sharper this week. How much sharper is hard to say. He will train nice and slow this week but no speeds. He might race barefoot upfront this time" says Stefan Melander.
In the King's Trophy you also have Click Bait, who defeated Power and won his elimination. What do you think of his chances?
"Click Bait (V75-7) took the lead from post eight in his elimination and defeated the Kriterium winner from last year. He is such a fighter and he will race well. I don't think he will beat Green Manalishi but never say never. He's not totally without a chance. He drew a good post, can leave very fast and he could end up top three. The race two starts back we can just forget when the track got sloppy after it poured down which meant he couldn't get to the front. He won't even trot 1:40 speed in the warm up but when the blinds come on and it's time to race he will trot 1:12".

"Will be greatly improved barefoot and with the blind bridle"
In the final of the Queen's Trophy Tarzan also trains the favorite. That's Ganga Bae who has seven wins and three second places in 13 starts so far. Her biggest win is the Breeders Crown final from last year and her earnings so far are SEK 2.6 million. She finished second in her elimination together with Jorma Kontio and she will start from post six in the final.
"Ganga Bae (V75-3) did well and I was happy with her last start. She has only made a few starts and you can't expect her to win every time. She had to go fast down the backside and she was good. She will be greatly improved barefoot and with the open-eye blind bridle in the final. She raced with that bridle in the Breeders Crown final last year. She has just trained lightly after the elimination and she's such a nice race horse who does everything right. She is one of the mares who can win it" says Stefan Melander.

"I put out a warning for her - no surprise to me that she won"
V75 once again comes with a jackpot this week. A sole winner can take home SEK 78 million with all seven winners on the ticket. Stefan Melander has four more starters on V75, one of them is also in the Queen's Trophy.
"Residual Thrust (V75-3) is a mare I put out a warning for before the elimination and it was no surprise to me that she won. She had been locked in several times before that and had shown good form. She should be further improved and she drew a dream post, it's not impossible for her to end up third or fourth".
"Elcas (V75-4) hasn't made anyone happy in a long time and he has just made breaks lately. He doesn't really fit this class all that well and we have to see how he does when he races on Wednesday at Solvalla first. He's chasing a check".

"Could have beaten an Elitlopp horse"
"Thrust Control (V75-4) made a break again last Saturday and I don't know why besides the fact that it's hard to have post one behind the gate when it goes so slowly. It's hard for him to get in anywhere now so he has to race where he gets in. He has felt strong for a long time now and could have beaten an Elitlopp horse two starts ago, had he not made a break in the lead. He drew a terrible post position but he can leave fast if he just trots out of the gate. He feels great and I just hope he minds his manners, in that case he's definitely not without a chance in here".
"Tito C.A. (V75-4) has gotten very nice after he was castrated. I think by the time this year is over, he will have won a big race. He raced well in Rättvik when he finished fourth to good horses after making a break early. His form is good but post position eleven is not so good" says Stefan Melander.