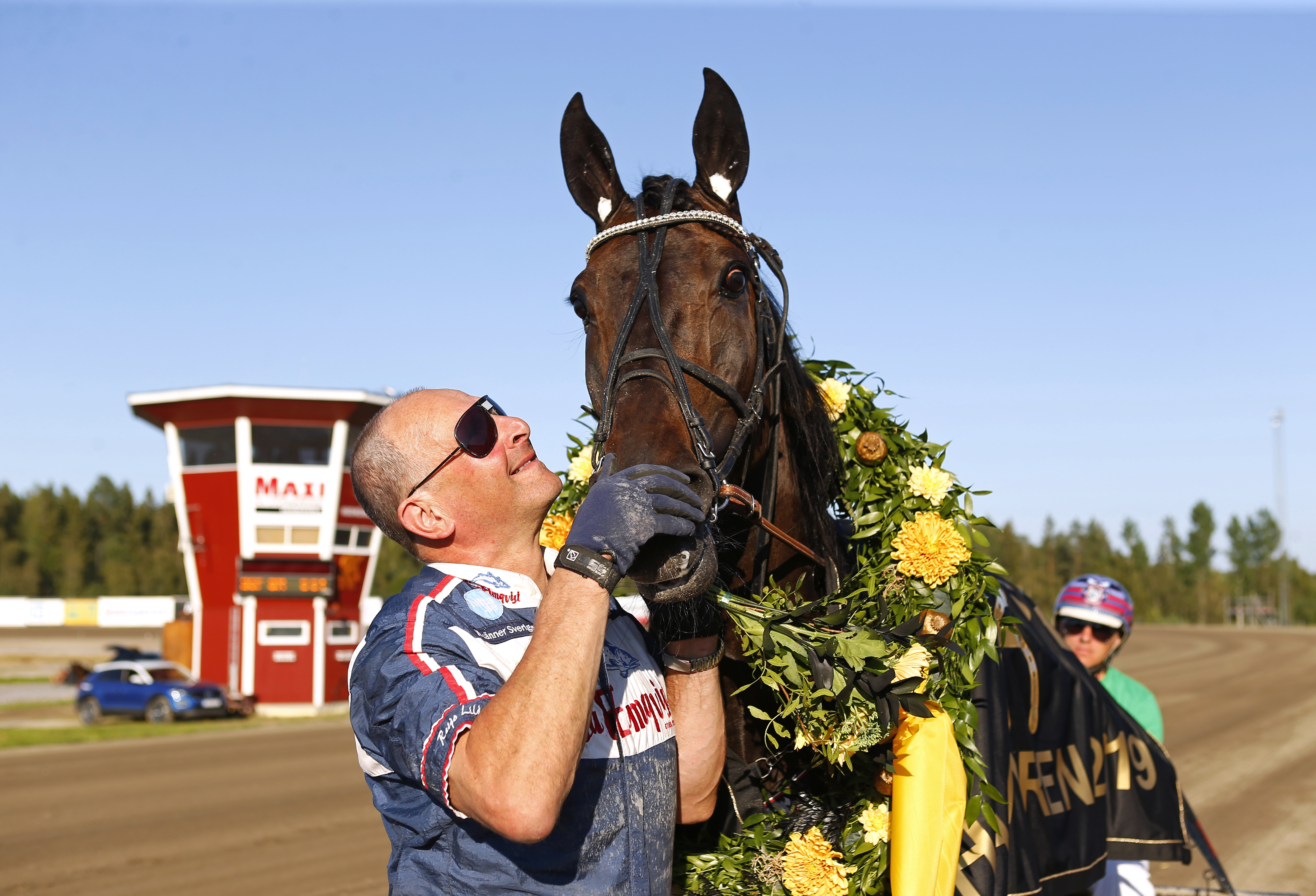 He was very close to winning the Kriterium as a three year old, got locked in in the Derby as a four year old and came up with a tremendous finish when he won in the Gold division in his last start.
Reijo Liljendahl has taken Policy Of Truth all the way to the elite and they could win the highest class again on Saturday.
"My horse feels very sharp and he's one of the horses who can win" says Reijo.

The Derby weekend at Jägersro is upon us and before we get to the Derby and the Mares Derby, there's a V75® card to be raced on Saturday.  This week it comes with a jackpot where a possible sole winner can collect SEK 28 million with all seven winners picked.
The Gold division could be a speedy affair with several leavers behind the gate over the short distance. One of the horses standing out is Policy Of Truth who in his last start won the Gold division at Hagmyren after a tremendous finish. Despite starting from the second tier over the short distance and almost being out by the fence in the last turn, he just exploded into the stretch and drew off to win. The time was 1:10.2/1,640 meters. After several good efforts prior it was finally his turn to win in the Gold division.

"Policy Of Truth (V75-3) was simply the best. He came home at a 1:07 speed the last 400 meters and won with earplugs still in. I've trained him after that and he feels just as good and sharp. He's not the type of horse that impresses in training but he's sound and feels good".

"My toughest loss ever"
Policy Of Truth has been at the top of his crop all along and as a three year old he came very close to winning the Swedish Kriterium. After making a short break he was only a head behind the winning Deimos Racing.
"That was my toughest loss ever. It still hurts" says Reijo when he thinks back at it.
As a four year old Policy Of Truth won his Derby elimination and in the final won by Cyber Lane he got locked in.
"Global Trustworthy who was outside of us was very rough gaited and if he had made a break we would have gotten out to win it.  The margins in this sport are very slim, he has made six millions but it could have been another eight" says Reijo.
The Solvalla trainer has taken his horse all the way to the elite. But Policy Of Truth has also had problems with injuries during his career.
"He's a good horse when he's sound. As a three year old he was the best one and as a four year old he had some issues and he has had two different injuries. It took time but he has patient owners who have let me work in peace and quiet and that has given the horse a chance to develop and progress".
"It's not easy getting up to this level and compete where he's at now. Getting the chance to acquire toughness and experience is necessary. You also need good trips to be able to win. You don't just go out in the Gold division and order a win on Saturdays".
"I actually really wanted to race him in Sundsvall but so did everyone else and he didn't get in. So we're going to Malmö this weekend instead" says Reijo Liljendahl.

Picked his own horse to win
Policy Of Truth will start from post six behind the gate and will once again be driven by Erik Adielsson. There are several quick horses on each side of him. How do you look at this race?
"They will leave a million out of there and he has to get lucky and find a good spot. That would increase his chances and he's one of the horses who can win the race".

You picked him to win in the 'V75 Expert Picks'?
"Yes, that's from my heart. But he's shown such high ability and he's good enough to win this. No changes are planned".

You have three more starters on this week's V75. What are their chances?
"Exclamation Mark (V75-5) is in good form. He won in 1:10.2 two starts ago and in his last start he finished second in the final. He didn't have to go empty but the race turned out a little strange when Örjan got such a jump on the field, so my horse couldn't be better than second anyway. He hurt himself last winter at Solvalla on a bad track but he's made it back. He seems sound and healthy now and he hasn't made that many starts. He's been good and I think he can develop into a Gold division horse. He's both and strong and quick and has all the ingredients needed. He drew a good post position here but he also has two quick horses to his inside so we'll see how the race unfolds. He has won from behind too. I think Policy Of Truth and Exclamation Mark are my best chances in Malmö. No changes" says Reijo.
"Bear Bahareh (V75-7) had the right conditions when she won V75 at Hagmyren, going wire to wire. It was too tough of a trip in her last start when she attacked the leader and tired. She's in good form but has a bad post, especially at Jägersro where post seven behind the gate is a shitty post. I'm sure she can make some money but it will hard for her to win. I haven't decided yet, but she might race in an American sulky on Saturday".
"Bay View (V75-7) has been good and consistent lately but she wasn't all that sharp in her last start. She should have done better and maybe I had been going to easy on her in training. She needed that start and hopefully she will be better this time. But from post eleven at Jägersro I don't think she'll have much of a chance".