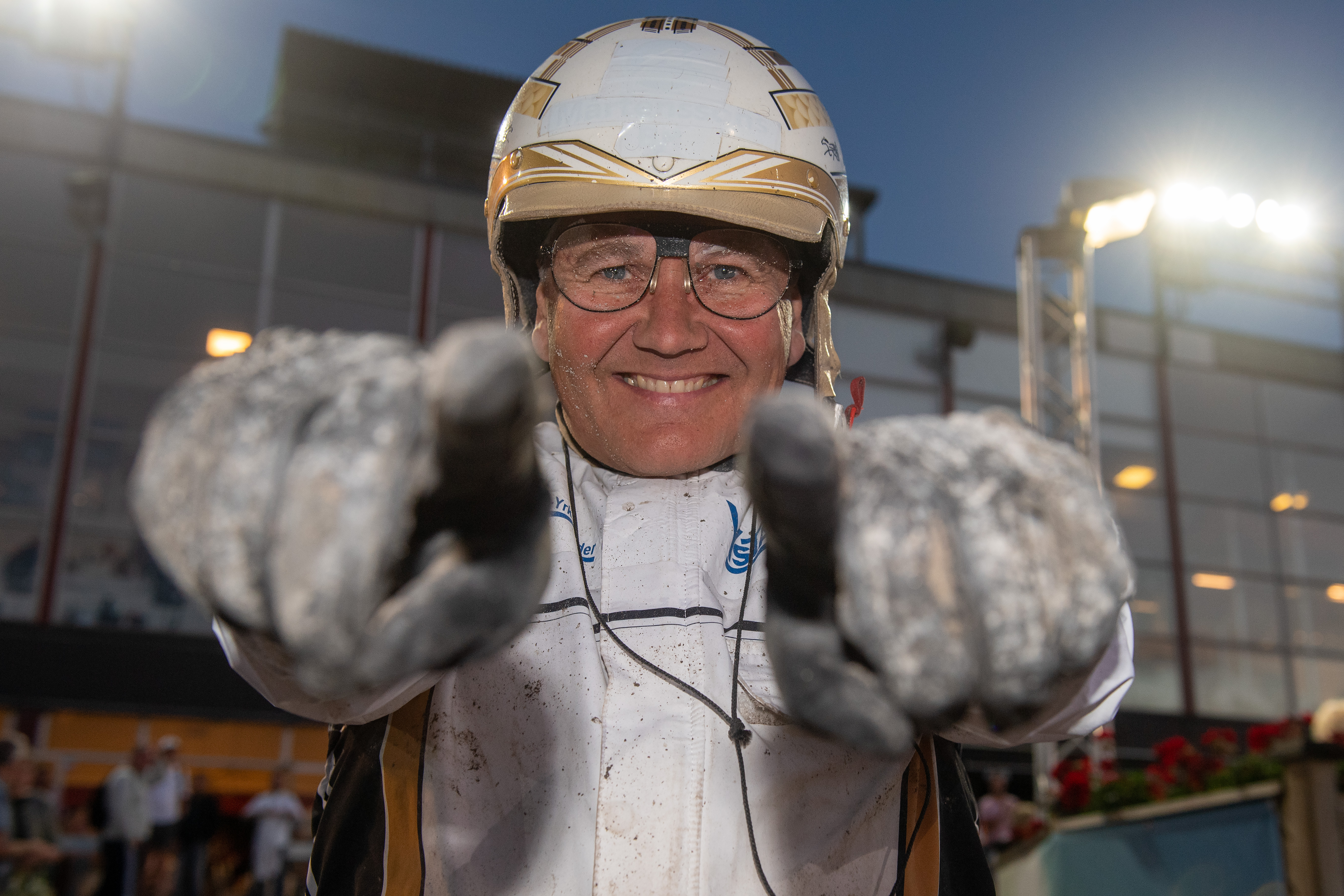 He has had a great season so far with his young stakes horses.
On Saturday further stake titles could be brought home.
Per Nordström can win both E3 finals.

The star of the stable, also the king of the crop so far among the four-year-olds, Önäs Prince, has won The King's Trophy, The Sprint Championship and Ina Scots Ära. When the long E3-finals were raced in July, Felix Orlando came out on top in the open division and Good Vibes finished second in the filly division. On top of that, Isaly Mist Sisu has won Guldstoet. Per Nordström's young stable, where only two out of 40 horses are older than four years old, is having a magnificent season and is sporting a win percent of 29, with over SEK 7 million in earnings so far.
"A few years ago I came out and said that I am putting all my focus on young horses and on these big stake races. That's what we work for and we have done a good job, hence the good results" says Per Nordström and points at the newly built farm as the most important factor.
"We built the farm on a piece of land where there had never been horses before. We have very good training tracks, both a sand track and a good 1,000-meter track and the fact that the young horses spend so much time outside is a big reason why they are so healthy" says the Jägersro licensed trainer and adds:
"In these days with the current pandemic, it's been easy to explain to people that keeping the distance is important, also for the horses. Our horses are turned out two and two usually and that way they don't get sick as much as horses who spend a lot of time inside a barn. The stalls open up to their fields so they can spend as much time outside as they like, which means they move around a lot and stay healthy. That way they can also train as usual in between starts".
Per Nordström has also trained and molded all his stakes winning horses from day one.
"That's correct. All these horses that have been successful are horses that I picked out as yearlings, broke and that I have trained all along. The fact that I have gotten to mold them from the beginning is also a big part of the success".

Can take an E3 double
On Saturday V75 comes to Gävle, where a jackpot means that there are almost SEK 60 million in the pool for all seven winners picked, and the icing on the cake is the two E3 finals. This time the three-year-olds will square off over 1,640 meters and just like when the finals over 2,140 meters were held, Per Nordström has a horse in each final. Felix Orlando (V75-2) has the chance of becoming a two-time E3 champion, but he wasn't really the Felix Orlando we are used to seeing in his elimination. As the mega favorite, he only finished fourth from the lead.
"My horse needed that start to get in top form. He has trained since he won the E3 final but hasn't gone any faster heats and he just got a bit tired from the high speed. His hearts and lungs were fine, he just needed to get the speed into his legs again. He has felt sharper in training after that and I think he is back in top form again".
Post position six behind the gate, what are your thoughts on the race?
"He can leave really fast, but in the elimination, he wasn't focused behind the gate and he kept messing with his mouth and didn't pick up the bit properly. We haven't found anything wrong with his mouth so we have tried another bit on him in training and we are very pleased with that. I think he will leave the gate much better on Saturday.
Could he even go straight to the lead?
"I won't promise anything. Redén's colt (Francesco Zet) can leave well. So can Dowhatyoudowell. My horse can leave fast when he is focused".
In the elimination, he raced barefoot all around, but now he is entered barefoot upfront and with shoes behind.
"He wore down the toes behind a lot in the elimination and he raced so well with toe shoes behind in the last E3 final, so he will race with them on again on Saturday. He will also race in an American sulky and we will put pull-out earplugs on him for the first time. I think that will have a good effect on him".
How good are his chances of taking home the E3 double?
"I think he will finish top three. Then it depends on the trip".

"I think we will be in the lead"
In the filly final, the Nordström stable is represented by Islay Mist Sisu (V75-6). Last year she beat Felix Orlando when she won Svensk Uppfödningslöpning and her biggest win this year came in Guldstoet. She won her E3 elimination very easily from the lead.
"She was great in the elimination and she's in top form. I had given her two nice trips and she was locked in when she wasn't in top form, but last time she felt great in the warm up and scoring down. So I decided on being aggressive and there was no doubt who was the best filly in the race".
Islay Mist Sisu has shown that she is lightning fast out of the gate and from post position two the game plan is given.
"The post position is interesting and she will race barefoot just like she did in the elimination. She will go in the American sulky again and she will also get pull-out earplugs for the first time. I think we will be in the lead and if they want to beat her, they will have to do the hard work on the outside".
It sound like a very good chance to win?
"If I have to pick one of my horses as the best chance I would say it's her. She has a better post position and she was so good in the elimination, so I think she might have a bigger chance of winning, but Felix Orlando is moving up in form too".