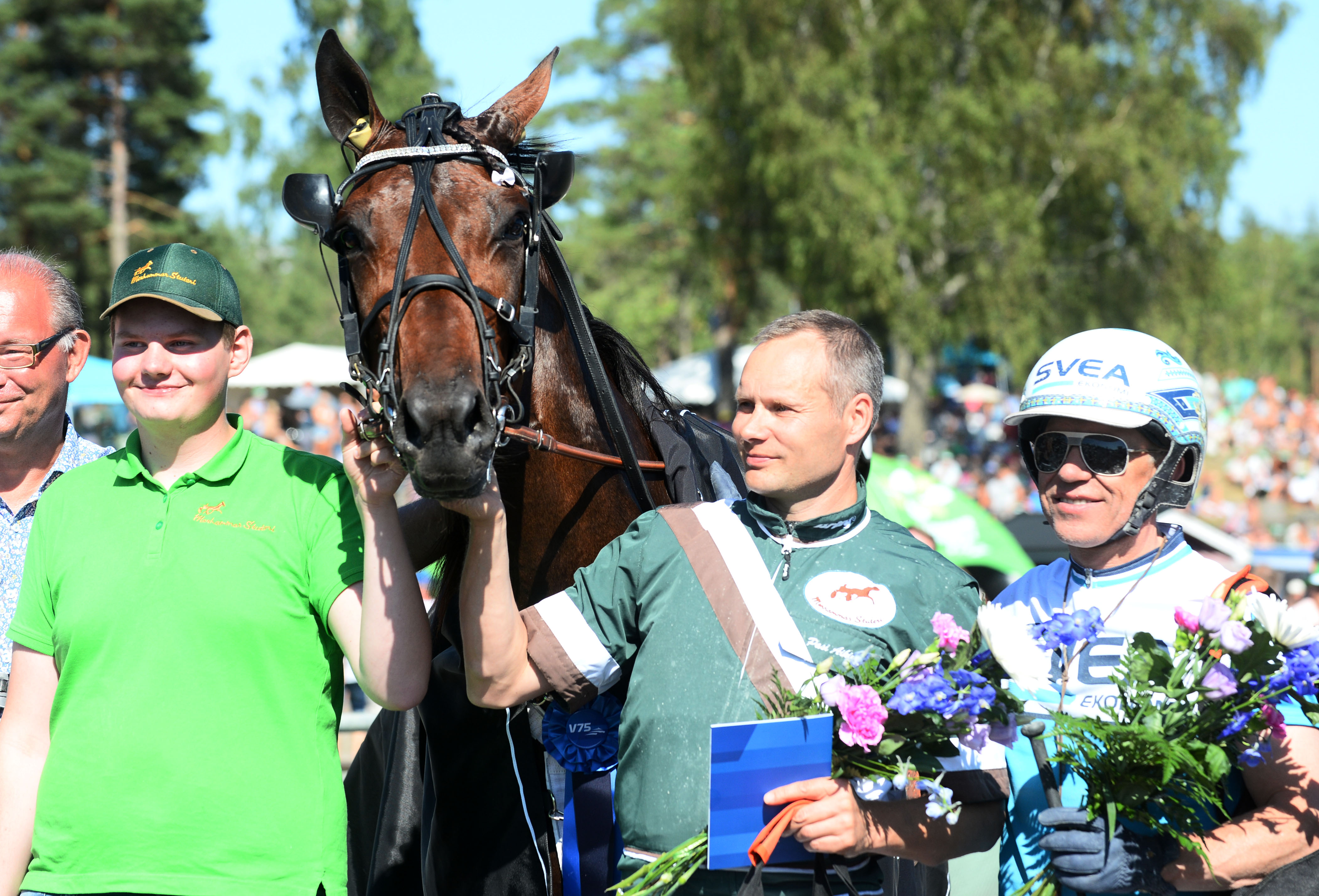 V75®/jackpot (Saturday): Horses and trainer are in superb form

Pasi Aikio stable is in superb form.
On Saturday the success could continue when Uppohoppa is chasing his third consecutive victory.
"If he stays out of trouble he could very well end up the winner" says Pasi Aikio about the bronze division V75® final at Åby.

With almost five month left of the year Pasi Aikio has soon surpassed last year's earnings - in less than half the amount of starts. His win percent is currently at 21.
"That's great. My horses have been healthy all year and that's a big part of it. We've been through a process where we got more younger horses in the stable and we've had many three year olds racing, which we didn't last year and it's been good" says the Solvalla trainer.
Also as a driver Pasi Aikio has enjoyed great success this year. His earnings as a driver has already surpassed last year's numbers and his win percent is currently at 19. His last win was with Adorable Lady in a leg of the Breeders Crown series last week at Mantorp. The same day Alone also got his ticket to the finals by coming in second in his division.
"We have a few really nice horses and are we lucky, they can compete in some of the bigger races for some good money. It looks good going in to the fall season and both Alone and Adorable Lady could possibly step up their game further" says Pasi Aikio.

Another star in great form
Uppohoppa (V75®-6) is no worse than his stablemates. The five year old wins every fourth start he makes and he's currently riding a two race winning streak. Two wins that has really shown how versatile this horse is. Two starts ago he went wire to wire and in his last start he got a much tougher trip from post eight. Uppohoppa sat last but rounded the entire field going three and four wide during the last 800 meters.
"He's been very good lately. We took it easy on him in training before his last start since we wanted him to peak at the final, so I'm sure he will be further improved after that race" says Aikio who in no way is surprised by this horse's success.
"He's a good horse so it hasn't surprised me at all. He's shown a lot of ability, especially last year and this year I think he's matured quite a bit and he keeps his weight much better now too.

"Loves racing on the front end"
So the final of the bronze division is this Saturday at Åby. This time Pasi Aikio will do the driving himself and Uppohoppa drew a perfect post two behind the gate.
"The post position is good and he can leave pretty well so we should get a good position. He's an easy horse to drive and takes care of most things himself. He grabs a hold of the bit just the perfect way when the car leaves and he loves racing on the front end so that would be the best scenario, we'll give it a try to get there" says the trainer/driver and adds:
"This time we'll pull his front shoes. Other than that he will race as usual - with a pull down bridle and in an American sulky".
What do you think about your chances in the race?
"I like my chances, it's a good, even field of horses and he's one of the better ones. If he stays out of trouble he could very well end up the winner of this race. I definitely think he should be top three in here".