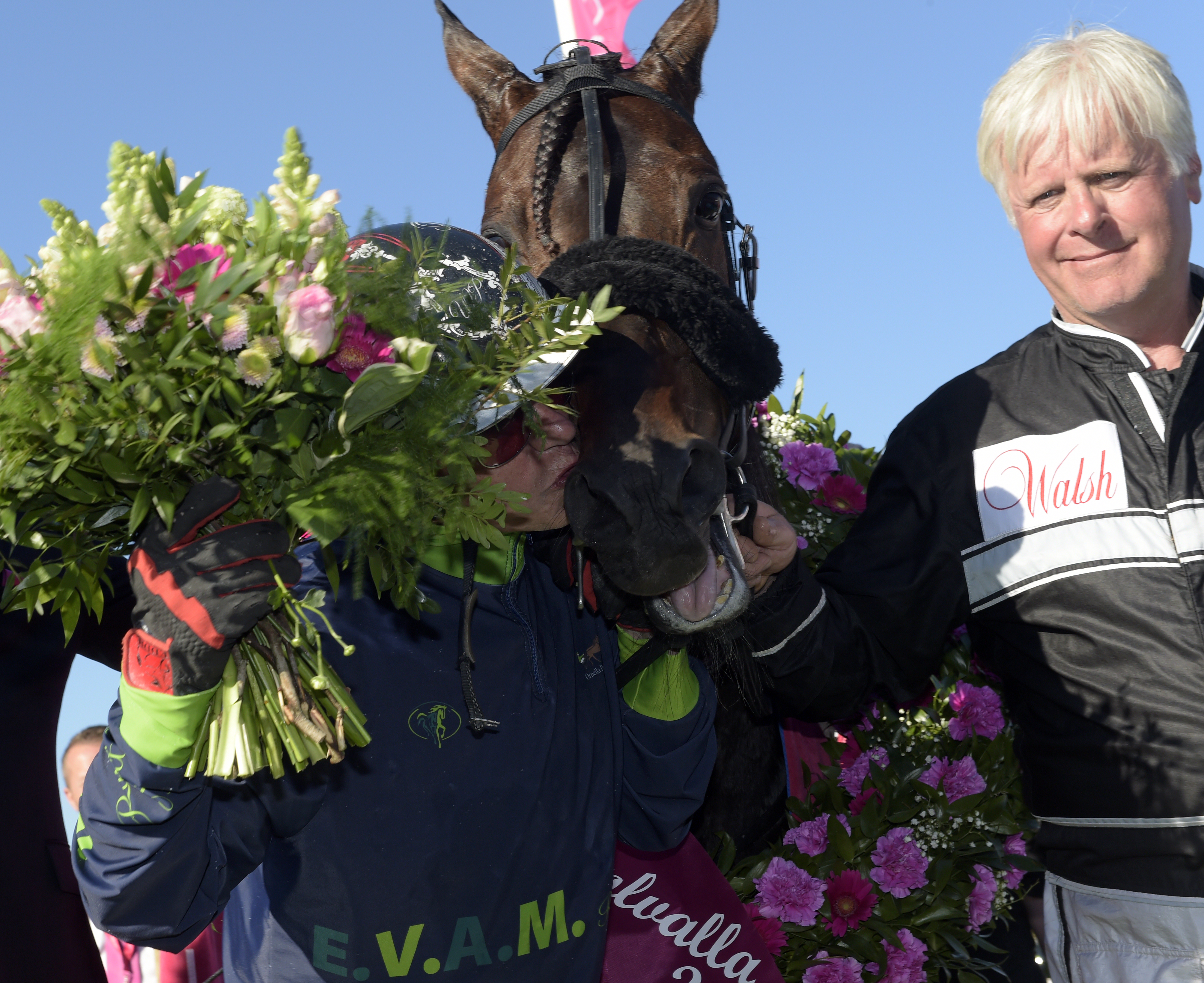 Last year he was totally unknown to most people.
Now he's the Swedish apprentice champion driver.
"It's huge. I was happy to just be in the race" says Victor Rosleff who is chasing new V75® victories this Saturday.

Maggie Cash and Victor Rosleff were the ones who stood tall as the winners when the Swedish Championship for apprentice drivers was raced two weekends ago at Åby.

That's the highlight of what has turned into a breakthrough season for the young Danish native, whose career on Swedish soil started with a job over the summer two years ago.

"My mom had trotters and she taught me how to drive at an early age. Then I got that job over the summer at Peter Untersteiner's two years ago. I was still in school then and wasn't able to move, but when Peter asked if I wanted to come work for him after school I didn't hesitate. I was there the first day after school was out" says the 21 year old with horses in his blood.

His maternal grandfather is Walther Kaiser-Hansen who was the dominating trainer in Denmark in the 60s and 70s and on his CV is a second place in Elitloppet with My Nevele in 1980 and an induction to the Danish trotting Hall of Fame.

If his grandson reaches the same level of success remains to be seen but it's clear that Victor Rosleff is very ambitious.

"My dream was always to become a trainer, but I'm still far from there. My goal for the next few years is to collect as much experience as I can. In Denmark I learned a lot from Axel Jacobsen and my time here with Peter Untersteiner has also taught me a lot. It's a great place to work" says Rosleff who hasn't gotten a lot of chances to drive by his employer. Instead it's another Halmstad trainer, Jerry Riordan who has trained the horses Rosleff has had the most success with, including this Saturday's both drives Key Mom and Maggie Cash.

"I'm very grateful that Jerry has given me these chances. It's hard to get drives and it has made a huge difference".

Why do you think you have gotten so many chances from him?

"Probably because it started off well. I won the first three races I drove for him and then it just kept going".

How was it to become the Swedish apprentice champion with Maggie Cash?

"It was huge, biggest win of my career. I was very happy and proud just to get the chance to drive in a race like that. Winning it was a great bonus".

You get the chance to drive her in the Bronze division (V75®-7) this Saturday, can you win again?

"You always hope so. I can't say I was surprised that she won her last start. She's very sharp when she can save her speed and we got the trip I had hoped for in the pocket. The way the draw came out this week, I hope we can do the same again".

So you have no plans of going to the lead?

"It's too early to say, but I feel that she's better when she can sit behind a horse like in her last start so my initial thought was to find someone good to follow and hope to find a way out".

She raced in an American sulky in her last start, did you notice any difference?

"I can't say I noticed a huge difference but she raced well in it and if Jerry wants it on her again I'm happy to drive her in it".

In the apprentice race, Victor will drive Key Mom but he's also the regular driver on Orbital Ås.

"Jerry is the one who decided which horse I will drive. Key Mom raced super in her last start. We got pressured already with 900 meters to go and I had to use her hard already there and it was strong of her to hang on for third. She's raced well many times and she's really due for a win".

Could it come on Saturday?

Are you aiming for the lead again?

"Yes, if I get to the lead I have no interest in giving it up. But she races just as well from behind".

"Hard to say. Orbital Ås has also raced really well lately. Two starts ago I gave her a bad drive and in her last start she got a tough last kilometer. I think they are pretty equal with a small advantage for Key Mom. But should Orbital Ås get a good a trip from that post position, then she's also good enough to win. She can also leave quickly, which she showed two starts ago".

Have you seen any effects of your Championship win?

"Yes, a little bit I have. In the apprentice race this Saturday for example. I saw I was listed on several horses, that's not the case usually. Maybe some people learned my name that day" says Victor Rosleff.

Here is what Jerry Riordan says about why he chooses to use Victor Rosleff as a driver:

"Already when Victor drove the very first race for me, I saw that he was confident and had a good way of handling the horse. It has continued, he's good at getting the horses in rhythm and get them in the race smoothly, he's also nice to them and doesn't pressure them too much which I appreciate. Something that really impressed me was when he won two in a row with Betting King, a tricky horse who had been impossible to keep trotting. Tactically he of course has more to learn but other than that I see no real difference to using him compared to the already proven top drivers. And most of all: you can't go to the gym and train to become a top driver, the only way is to drive a lot of races and the young guys have to get the chance to develop".