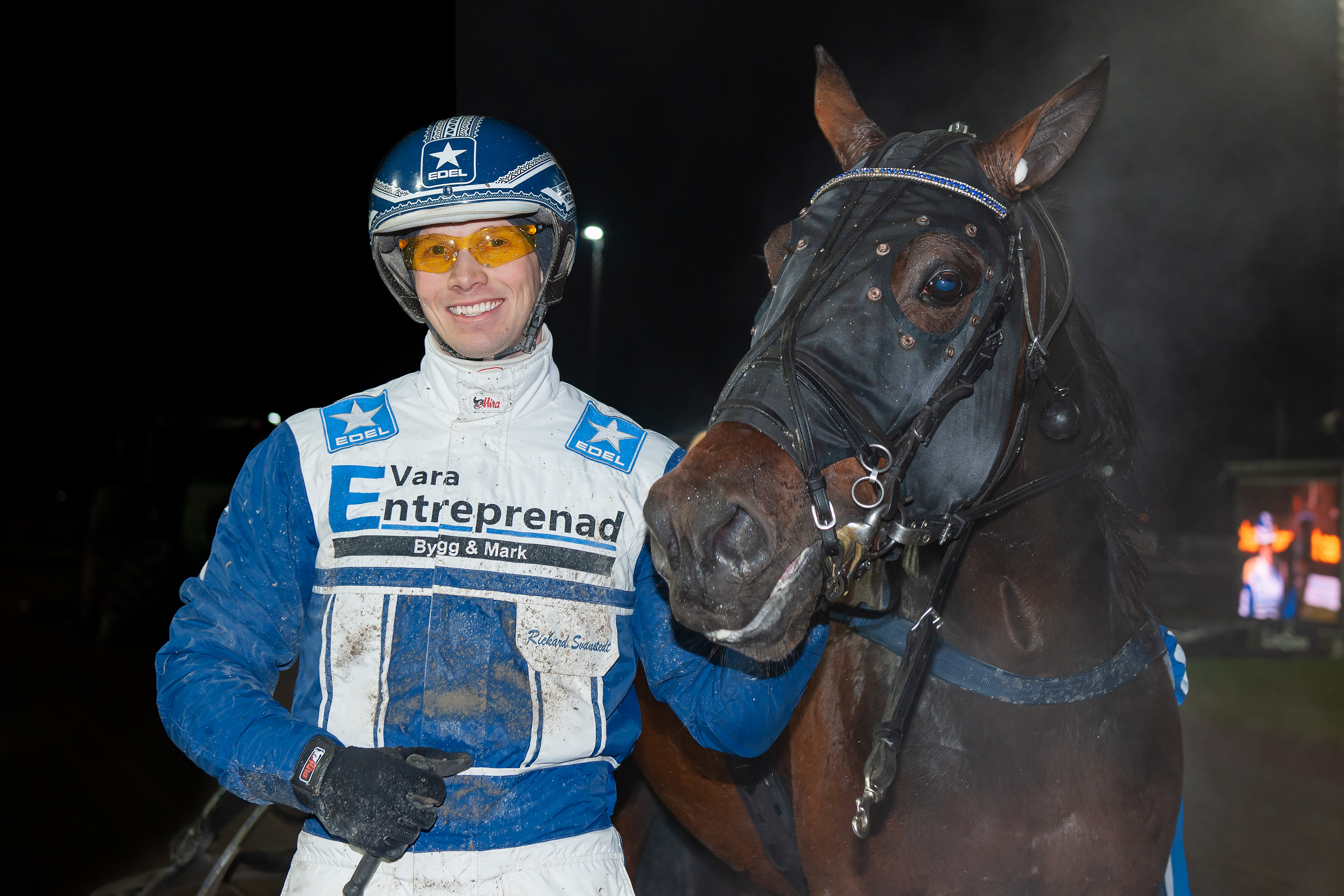 V75®/jackpot: The Elitlopp dreams are picking up in Gävle

The Axevalla licensed trainer Rickard Svanstedt will race for a spot in Elitloppet in V75® at Gävle.
Baron Gift is the horse he has taken all the way to the gold division and on Saturday it could be time for the big step.
"It feels like he is sitting on the race of his life".

Gävle racetrack is serving a very nice trotting menu, jackpot on V75® with at least SEK 65 million in the pool and the race 'The Road To Elitloppet' as the sixth V75 leg.
It's a gold division final where the winner gets an invitation to Elitloppet.
The distance is one mile - 1,609 meters - and Rickard Svanstedt can't wait for Saturday to get here.
The form indicator is pointing straight up for seven year old Baron Gift.
Three weeks ago the star of the Svanstedt stable raced in an open at Rättvik and Jorma Kontio then replaced the suspended trainer in the bike.
Daniel Redén's Canari Match set the tempo and Stefan Melander's Milligan's School was parked outside. When Kontio attacked with Baron Gift with 500 meters to go there was no doubt who was going to win it.
"That was a lot of fun. My horse had felt very good in training and before the race I had been very optimistic and promised this and that. But the horse showed that he was very good! Kontio is sort of an idol of mine and it was great that he could drive. I said to Jorma that he would get to show off Baron Gift that night and he did" says Rickard Svanstedt.
The competition is very tough and Baron Gift did not get an invitation to Elitloppet after the race. Instead, it was the racing manager at Gävle, Mathias Gustafsson who gave Svanstedt the chance.
"He called and invited us to this race and that sounded good. We had time to go over the horse and it will be eight days until a potential start at Solvalla. Racing back to back weeks works well for Baron Gift. If we get invited, everything is optimal for my horse".

Better than ever
If the rookie Baron Gift has any business being in Elitloppet, that is. Rickard Svanstedt got the horse in training in the fall of 2016 and last year he won in both the silver and the gold division on V75.
"He has had his share of issues over the years but now he is sounder and more durable than ever. He's definitely not a fragile horse today, he can handle tough training as well as tough racing. I didn't expect to get an invitation after the Rättvik race since we're kind of an underdog, but this is fine too. Because we want to race in Elitloppet".

Will beat the elite
Rickard Svanstedt is well aware that everyone wants to see proof that the last start was not a fluke. That Baron Gift has taken the step up to the elite for real.
"We will try to show that on Saturday. He has done everything for me this horse and he's such a kind and nice horse. Saturday will be tough and we'll see if we can beat these. Billie de Montfort is a world class trotter and I guess it will be full speed from start to finish".
You drew post position three behind the gate. What are your thoughts?
"He is pretty fast out of the gate. But he is racing in the elite now and that's why I guess it doesn't look like he is leaving as fast. The other can do it too, But I will try to leave all he can when the gates open. He has raced with pretty much the same equipment since he was three years old. We have changed the bike, he races in a regular style race bike now. Besides that he races barefoot and with a blind bridle".
And Baron Gift is in the form of his life as it sounds?
"We entered him to some of the bigger races last year, without getting in. But he's better this year, stronger and more durable. So I actually believe that he will grow into the elite and race in some of the bigger races this year".
Elitloppet - "everyone can't win the world's biggest sprint race"...but "it's fun to be in it"...
Haha. That's right. But he's very good on a sloppy track. Would the track be real sloppy that Sunday I actually think he would have a chance to win. On a fast track he might get a check. A dream".
Mats E Djuse will drive Argbiggan in V75-2, a leg of Diamantstoet. She finished well after a ground saving trip in her last start. Her chances?
"I think she also feels better than ever. The effort in her last start is one of her best. She functions well barefoot now and there any many upsides to her. It's a youth race where we have an advantage having an experienced driver like Mats E Djuse, on the best drivers in Sweden who drives in these youth races. It's a tough race and things have to go right along the way..but she's good enough to battle for the win".