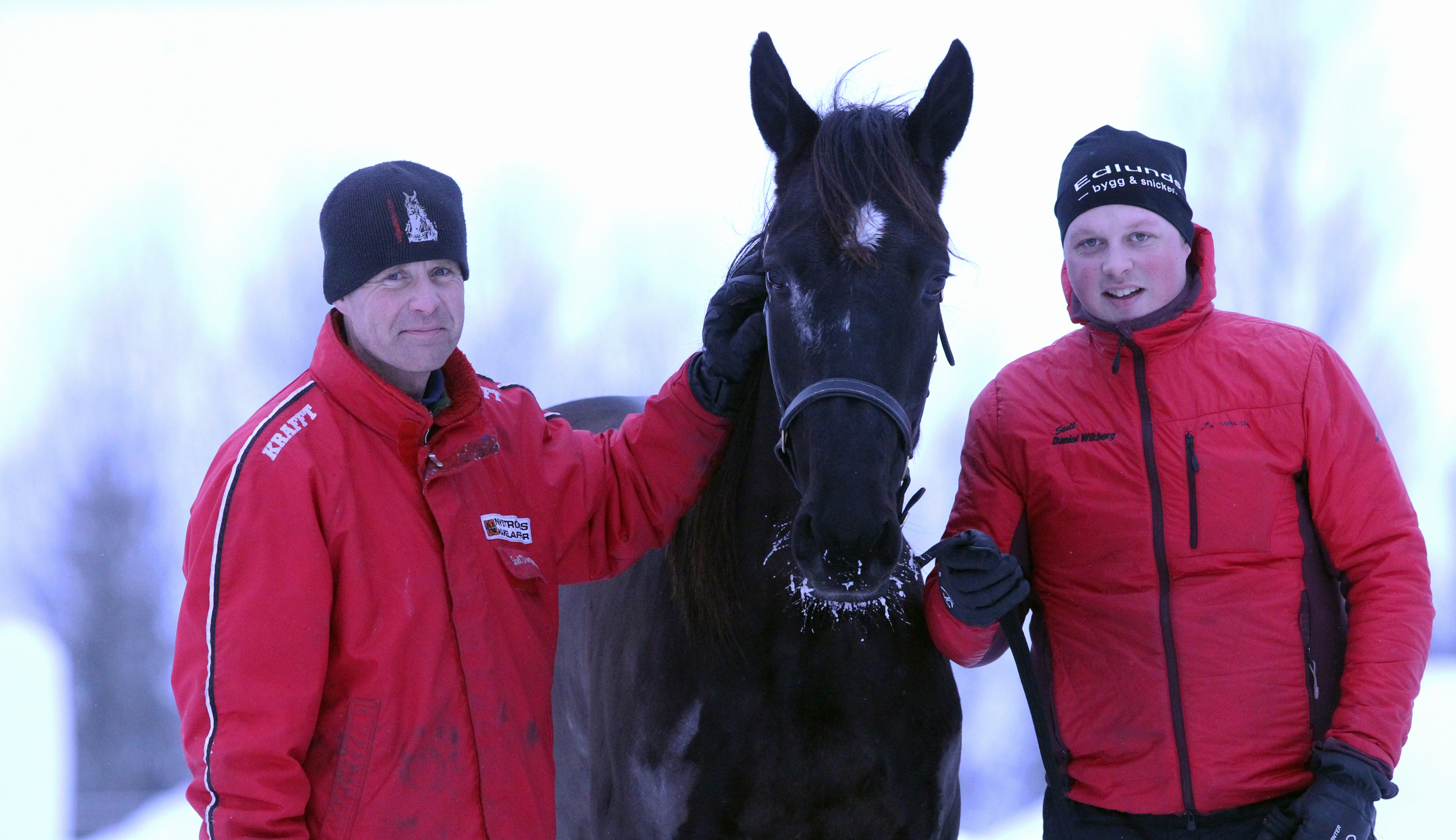 V75®/jackpot The Östersund express will be a factor again

Four year old Weekend Fun is sharpening his form on the ice of Storsjön.
The talent from Östersund has a really heavy finish and he is chasing his fifth consecutive win in the klass II final this Saturday.
"Even if it looks a little tougher this week I still have to believe in my horse" says trainer Daniel Wikberg who has some light jogging on the ice planned for his horse this week.

Last year Weekend Fun won six races and this year has started off with two easy and impressive wins on V75® and V86®.
The four year old gelding is a big talent and the expectations are high going into the V75 finals at Solvalla.
Östersund trainer Daniel Wikberg lives in the beautiful little village Hackås, just south of Östersund.
"Yes it's beautiful here. The farm is on the highland by the lake Storsjön. It can some cold winds at times but the view is spectacular and training conditions are great. I train a lot on the ice but lately I've also trained uphill quite a bit. We have a long uphill we use and it's almost 2 kilometers long that takes a lot out of them" says Wikberg.
Weekend Fun is one of the horses in his stable who has been trained both on the ice and in the uphill. From the farm it's just a couple hundred meters out to the lake and on Wednesday there will be some light jogging on the ice for the star of this 20 horse stable in Hackås.
Weekend Fun was purchased for SEK 35,000 at Kriterieauktionen in Stockholm 2015. A real catch by the husband and wife Rolf Eriksson and Gunilla Olsén Eriksson from Östersund. This weekend the couple will travel to Stockholm to watch their horse race for SEK 250,000 in the V75 final (V75-4).
"Rolf och Gunilla has use the stable name Stall Släggan and they love the races. It's fun that they're doing so well. Weekend Fun is the best horse I've ever trained and if he can stay healthy he can go very far" says Daniel Wikberg.

"Östersund's new Sanity"
In his last start in a V86 race at Bergsåker, Weekend Fun took his fourth consecutive win and impressed again. Rikard N Skoglund who has driven in 8 of the horse's 16 starts was very impressed when Weekend Fun turned the field inside out four wide down the back side from fourth over, to clear the lead before the last turn.
Weekend Fun's caretaker Jimmy Dillner took care of the Bergsåker start while trainer Wikberg stayed home to work and watched it on TV. There he could here his driver say on TV that Weekend Fun is the Östersund's new Sanity - who trained by Malin Löfgren made SEK 10.2 millions and raced in Elitloppet.
"Nobody would be happier than me if he is" Wikberg says laughing.
"But I'm the type of person who likes to take it one race at a time. i know how thin the line is between success and fiasco. But he's something special for sure. He has the right attitude and he never wastes any energy".

Pull-off ear hood the extra gear
The ear hood oh the horse's ears has been the difference in the last few starts. Driver Rikard N Skoglund has put the extra gear in already on the backstretch.
The effect of it has given the race caller a high pitched voice.
"He really reacts when that ear-hood is pulled. He's very laid back and doesn't do more than he's told. He's got a tremendous attitude for racing".
"He might not be the best gaited horse but he's got a long stride and his attitude and will to win is what makes him so good. He does it so easily and always at a very low heart rate".
What do you think of his chances on Saturday where a sole winner can go home SEK 47 millions richer?
"For once he drew a good post position. He's been getting ten, eleven, twelve lately. So it definitely feels better now with post four behind the gate. It's a tough race, being that it's the finals. I have lots of respect for number 6 Divine, I think she'll be the toughest one to beat. But of course I think we have a chance. We'll leave from home early Saturday morning".
Weekend Fun has taken his last two victories with corks in his shoes. He seems to like the tracks this time of the year?
"He trains with corks a lot so if it would freeze or snow on Saturday and the track would get hard, it would benefit him. He seems to race best with them I think. Or at least he needs a lot of grip. He needs that in the summer too. He's not as improved as other horses when racing barefoot".
Will he race from behind again or do you have other plans this time?
"I don't know where he'll get away. He's not super quick in the start, just so so. He's very laid back in a race but as soon as someone comes up next to him he wakes up, so I would think he'd race very well in the lead too".