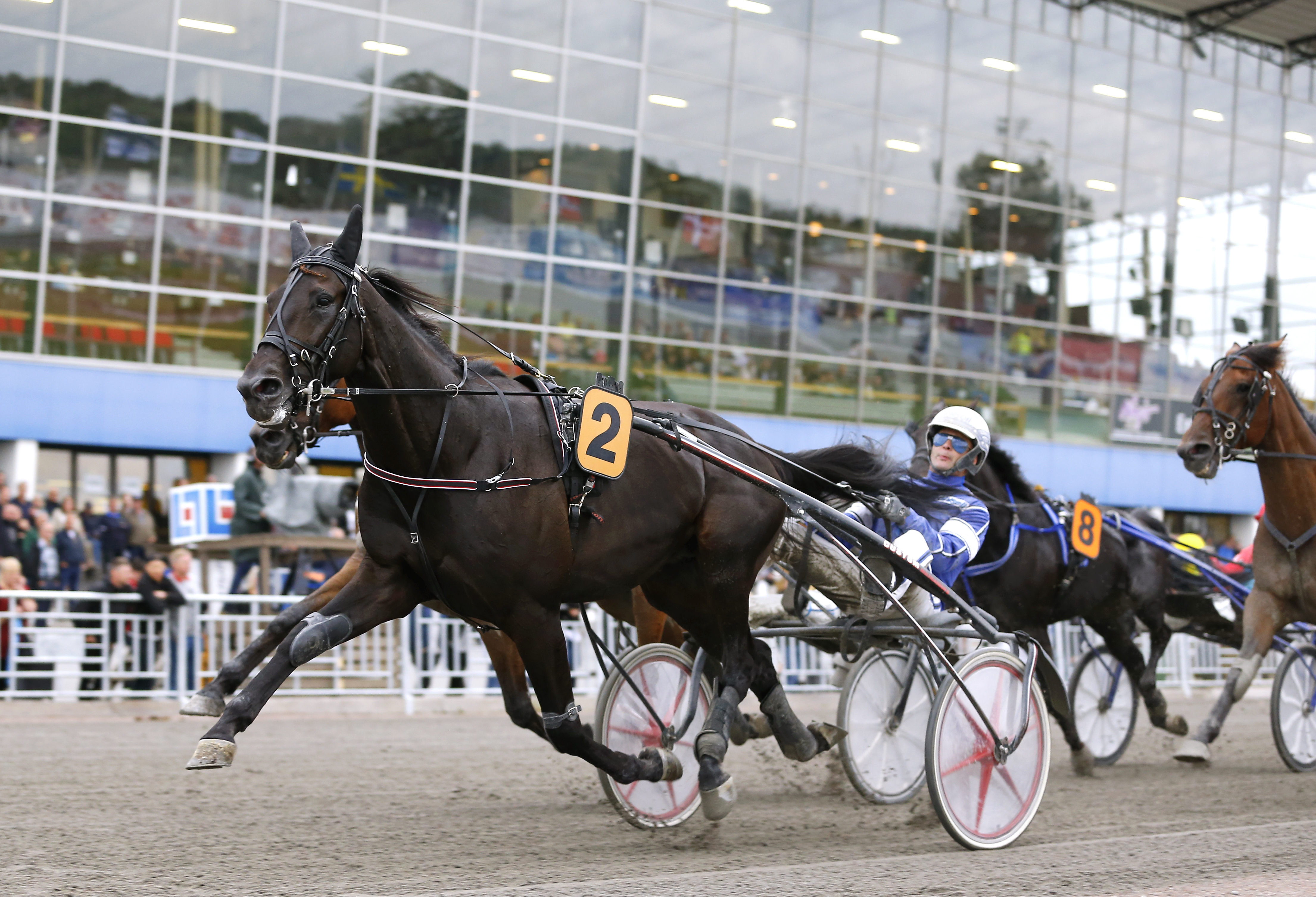 Very Kronos has always been on everyone's lips and he has shown sky high abilities.
But he has also been very mischievous.
The time has come for his return and it will take place on V75® in Örebro.
"If he minds his manners he is my best chance to win" says trainer Svante Båth, who has several high class trotters racing on this jackpot V75 card.

V75® once again comes with a juicy jackpot this Saturday. At least SEK 75 million awaits a sole winner with all seven winners picked, according to ATG®'s calculations.
A key trainer on this jackpot card is Svante Båth who sends out some of the best trotters in his stable.
High class trotters with extremely high abilities could be used to describe many of them.
Very Kronos is one of them and he has been on everyone's lips ever since he started racing. He has been very impressive several times and has won 14 out of 27 starts. But he has also bewildered his connections and left a lot of money on the table by making costly breaks. His last victory actually came in the silver division this very race day one year ago in Örebro. Very Kronos then won easily in the lead and defeated Velvet Gio.He made a break in the following start and after that he finished second to Milliondollarrhyme in the final of the silver division. He then had a long layoff after being bitten by a snake, before he was shipped to France. He made two starts without having any success there.
"Very Kronos (V75-2) was off for a long time after he got bitten by a snake and then we took him to France and thought it was over. He was OK in his first start, but then he started having problem with the ankle in which he got the snake bite. He made a break in the second start down there and that's when we shipped him back home" says Svante Båth.
"After that we've trained him thoroughly and he comes well prepared for this start. He has been to Solvalla and trained under 1:13/1,600 meters. He felt very good then and he has felt good for some time now".

"He has gotten a year older - but I can't promise anything"
Very Kronos will start from post position three in the second leg of V75. He will be driven by Erik Adielsson as usual and trainer Båth is excited to race him again. It's a horse who early in his career was expected to climb straight through the classes up to the very elite, but it hasn't been smooth sailing so to speak.
"It's incredible that he hasn't gotten further, but on the other hand I hope he still has a lot more to show because we have tried to take care of him. He feels good in training like I said but we know from before that he can be very mischievous".
"But he has gotten a year older and i hope he has matured but I can't promise anything yet. He needs to mind his manners and if he does we know he is very capable. Post position three is good and if he stays flat he will be in the photo. He is my best chance on Saturday" says Båth.
Any changes when it comes to shoeing and equipment?
"We have raced him barefoot in France but never in Sweden. I would love to race him barefoot now but I haven't made up my mind yet. I want to make sure his feet are good and the track is nice and soft first. No other changes".

"Worth using if you play with a few in this race"
The Solvalla trainer has three more starters on this jackpot V75 card and here are his comments:
"Esprit Sisu (V75-3) had a fantastic season last year and was very good. To be honest I think he only had two mishaps. Once he was sick and the other time I screwed up and pulled his shoes. Besides those two times, he has delivered in every start. I was very happy with his first start in the gold division. He has an interesting task here with post one since he can leave fast. But there are many horses who can leave fast in this race so we have to see what happens. I think he will grow into the gold division and he could be worth using on the ticket if you play with a few horses in this race. No changes".

"Ability to get to the gold division"
"Fighter Mearas (V75-5) has a lot of ability and I felt early that he was one of the best in his crop. But he has run into many speed bumps along the way. He was incredibly good in his last start and was able to win despite the tough first 500 meters. I have felt for a long time that he has it in him and I hope he will start showing it now. I have been very pleased with his last four starts and it wasn't his fault when he made a break four starts ago, he got run into. Besides that he has been very good and has won three in a row. We haven't done anything special with him, it just seems like he has matured. We have been patient with him and there are extra gears to use, like pulling his shoes. We have chosen to play it safe with him so far. Unfortunately he drew post twelve this time, in a very tough leg of class one. We could easily get beaten from here even if my horse races his heart out. But he has shown that he is strong and tough and that he doesn't mind a tough trip. I have said before that he has enough ability to get to the gold division and I have no problems sticking with that statement. No changes".
"Deep Pockets (V75-7) had post two over the short distance in his last start and I was very happy with him going into the race. Unfortunately a heavy rain turned the racetrack into a swimming pool. The track was good in the race before ours after they had scraped it. But he couldn't keep his gait together when the track was muddy. That was very unfortunate. He drew post twelve this time and it feels like he lost the race there" says Svante Båth.