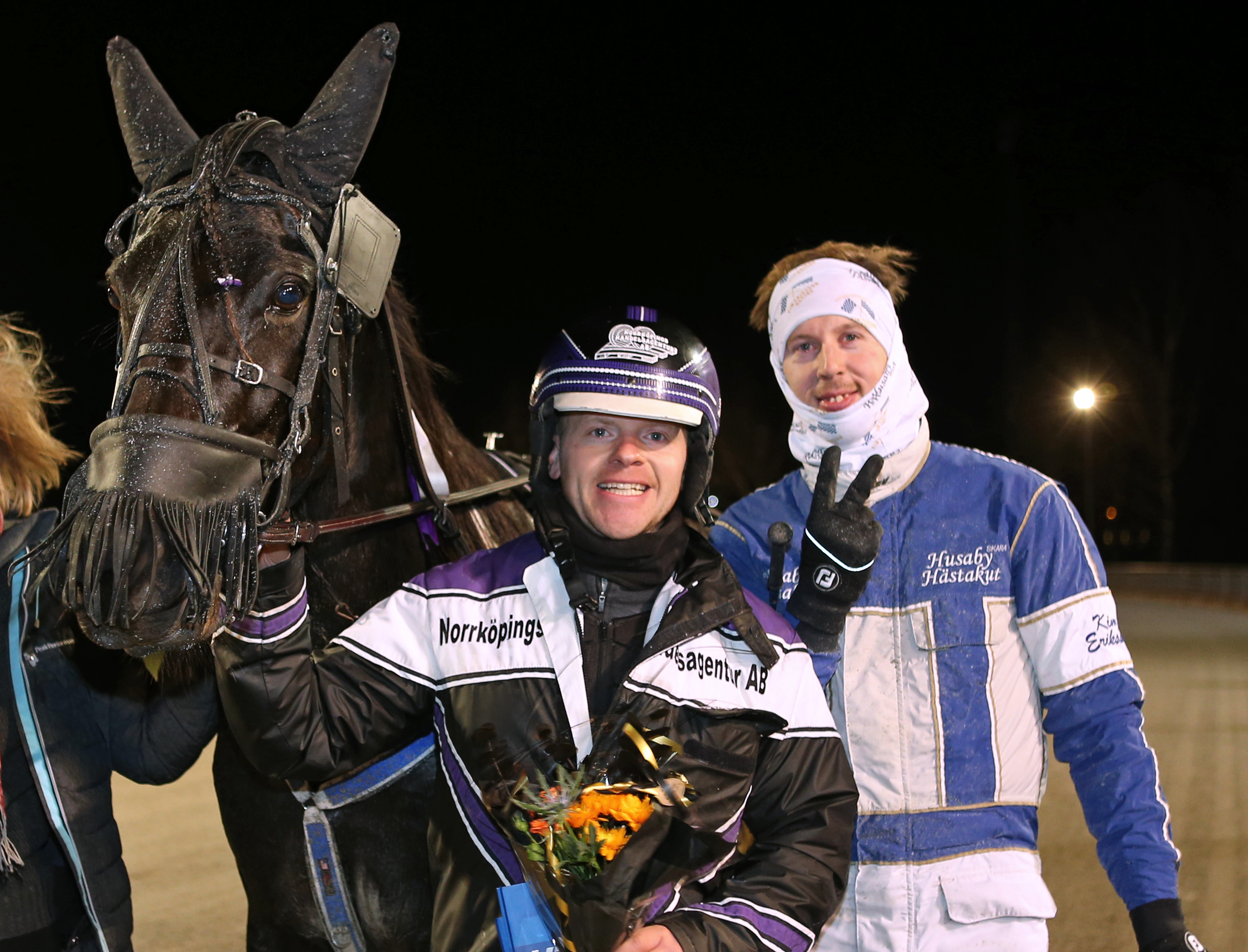 This Saturday the bettors will be betting into the biggest pool ever on V75®.
When a possible sole winner can break all records and take home SEK 120 million it could prove foolish to not take last week's longshot seriously this week.
Trainer David Källgren and driver Kim Eriksson are once again hoping for the nine year old mare Speedy Foxy Vicane who is in top form.

The payout for picking all seven winners on V75® was SEK 9.5 million last week at Romme where a mare from Vaggeryd in top form was tricky to find for the bettors.
35 year old amateur trainer David Källgren trains Speedy Foxy Vicane and is racing her according to plan when he lets her go out in the silver division (V75-7) for the second consecutive week.
Speedy Foxy Vicane took the first win of the year in her seventh start at Romme last Saturday. Her finish was superb and she beat all the boys.
"She races best with 7-14 days in between starts, not more. It's a tough silver division but she's got a small chance again" says David Källgren.
'Foxy' as her nick name at home is, was only on six percent of the V75 tickets last week. She had no luck in the championship for mares and in her last start she was locked in at Solvalla.
In the silver division at Romme she finished very strongly, coming from fourth over to win in a photo finish.
"It wasn't the smoothest ride with horses half in/ half out and some other little things happening along the way.  They only went the first kilometer in 1:14.5 too, which is way too slow...so it was good of her to get up there" says David Källgren, full time amateur who trains the horses together with his girlfriend Lisa Andersson.

Takes the chance before winter comes
The Swedish horse betting company ATG® has set aside money during the fall season and have built up a multi jackpot for this Saturday's V75 at Eskilstuna.
SEK 120 million is how much a sole winning ticket will be worth - an all time pay out record for V75 if it happens.
David Källgren says he can't expect a win again in a tough silver division, but the chance is sure there.
"There are tough opponents every week and I can't say how she ranks against these. But she could surprise the bettors again. She likes to race back to back weeks and races well like that. The final is three weeks away, that's too much time in between starts for her. Winter could come any day and then she won't be racing. So we'll make this start instead and then we'll take the final as a bonus" he says.
In October last year she won in the silver division on V75 and when the snow came she was put away and skipped the final.
"She's a fantastic mare who has been racing since she was three years old. She will make her last season next year if everything is fine. She had an 18 month long layoff due to a suspensory injury and has made it back this well from that".
Foxy likes being on the road, she eats and drinks well away from home.
"She relaxes and enjoys it. So she's star that way".

Wången Cup winner
Amateur trainer Källgren likes the balance with four to six horses in training. So he has no plans on becoming a professional (public) trainer.
He was born in to the business in a family from Lindesberg where his father Bernt Källgren was always an amateur trainer with both warmbloods and coldbloods in training.
Lotta Johansson, Claes Svensson and Mikael Selin are the trainers he has worked for.
"I like driving races and I've gotten many chances by my former employers. My best year driving was 2009 when I had earnings of SEK 1.4 million in 350 races and finished first in the standings of Wången Cup and also won the final".
"That's when I was driving against guys like Tony Wallin and Johan Untersteiner" says David Källgren.

Uhrberg became Eriksson
He lets the more experienced drivers drive Speedy Foxy Vicane. When Thomas Uhrberg had his own mare Mulligan in the Mares Championship in October, he turned to Kim Eriksson.
"Kim was up and coming just around the time when I was driving the most, so I've watched his progress closely. I'm happy for him when he does well and I've had nothing to complain about when he has driven Foxy".
Speedy Foxy Vicane will race as she did in her last start, barefoot and in an American sulky.