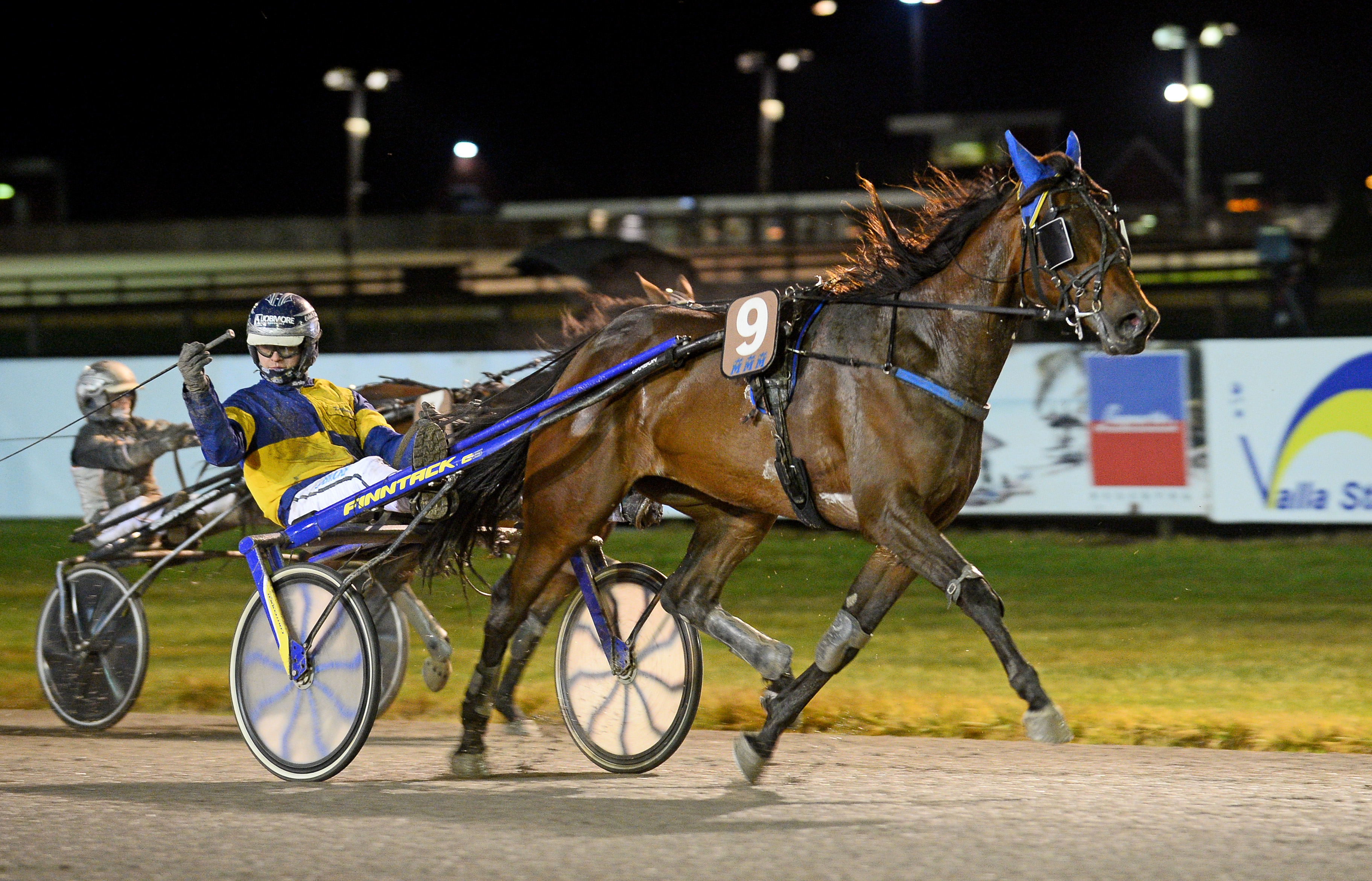 Vikens Fingerprint has shown brilliant form and won on V75® as recently as the day before Christmas Eve.
Now the amateur trainer Mikael Fellbrandt is hoping to win again during his hometrack Axevalla's multi jackpot V75 card on New Year's Eve.
"She's in terrific shape and hasn't had to go all out in any of her starts lately. It looks like a good chance to win again" says Fellbrandt.

We have reached the final of Winter Burst®, the V75® multi jackpot on New Year's Eve. As of Friday there is SEK 60 million in the pool for all seven winners picked, which could be more if there is a jackpot on Saturday, Sunday or Monday on V75.
Axevalla with the longest home stretch of all racetracks in Sweden - 227 meters - is very decisive and we have a very attractive V75 card betting-wise to look forward to.
In the first leg Vikens Fingerprint will be the favorite thanks to her convincing efforts lately on V75. She has raced against tough mares in the mares elite and has done very well. She has four wins in her last six starts and when she finished second on V75 two starts ago she never got out in time and crossed the wire completely unused. She won her last start and that was on the night before Christmas Eve when Vikens Fingerprint was toying with her opponents.
"Vikens Fingerprint (V75-1) has really found a fantastic form now. She's in the best form of her life and was pretty unused when she won in her last start. They set a high pace upfront and she sat in the rear end of the field. She maintained her speed the entire way and won thanks to her strength. Oskar J used the pull down bridle but did not pull the earhood so she didn't have to go empty" says Mikael Fellbrandt.

"Nobody is superior - should be able to beat them"
Fellbrandt is an amateur trainer who has his farm only two kilometers from Axevalla racetrack. He is racing two horses on V75 on New Year's Eve and hopes and believes in a win for the home team right off the bat with Vikens Fingerprint. If so, the four year old mare will surpass SEK 1 million in career earnings. She will start with a 40 meter handicap and will once again be driven by Oskar J Andersson.
"I think the race came out pretty much the way I expected. There's no superior horse in the field, even if Adi Gallia has been very good. But she's in the second tier, behind us. I think we will see an aggressive drive this time, even if the tactics are up to Oskar. She can do a lot of hard work herself if necessary".
"The horses starting in front of her on 2,140 and 2,160 meters are horses I think she should beat. Racing with shoes is fine with her, she raced with aluminium shoes in her last start. She'll race with them again this time. We haven't tried her in an American sulky yet and I don't think we will this time either. Maybe this time we will pull the earhood which hasn't been done in the last four or five starts. She responds well to it and that's usually an extra gear. I think it looks like a good chance to win:" says Fellbrandt.

"Doesn't look all that tough - she has a chance"
The Axevalla amateur also has Vikens Energy racing in the sixth leg. She last won a Grand Slam 75® race on the front end but this time she will start with a 20 meter handicap.
"Vikens Energy (V75-6) was very good in her last start. She has raced well for a long time and it was nice to see her get a win. She's in very good form and I think she's at her best when she can sit until the last 500 meters and use her speed. Starting from post five in 'volt' start is no problem, she is safe. Same equipment and shoes as in her last start. I don't think the race looks all that tough and she should have a chance to win. It will be an exciting night and she should be considered a possible upset".