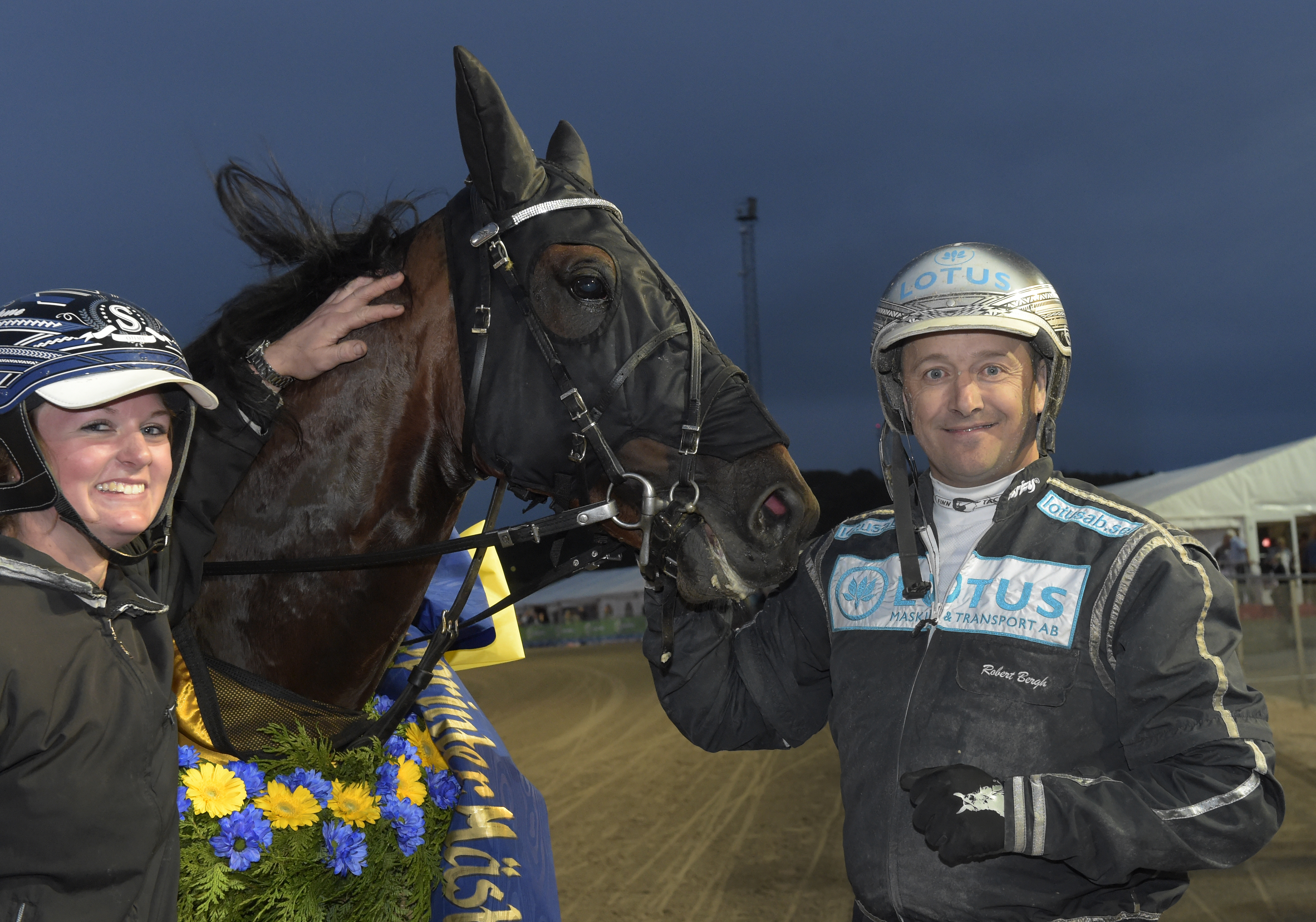 After his win Monday with Balfour in Paris Robert Bergh has an ever bigger gap as the leader of the Swedish trainer standings.
This Wednesday he's racing several interesting horses on V86® who can add on to that lead.
"Honore d’Inverne is my best chance" Bergh says.

The Åby licensed trainer is nearing SEK 24 millions in earnings this year. A few weeks ago he took the lead and surpassed the prior leader Daniel Redén with his earnings of SEK 23.2 millions to second place. Robert Bergh has won several big races this year with his starts Diamanten (Kungapokalen, Sprintermästaren), Muscle Hustle (Norrlands Grand Prix och runner up in Sprintermästaren) and Balfour (Örebro International, The Owners Trophy). The latter also won his French debut this past Monday. It was a convincing win worth SEK 238,000 at Enghien after being in the lead early on. Trainer and owner Roberth Bergh drove the winner himself.
"That was one of his easier victories. He trotted very fast down the stretch and crossed the wire at full speed. The last 20-30 meters he left them with a couple lengths" Bergh says.
"He felt smooth and relaxed. I had a feeling he would like the French starts better than the Swedish ones and he wasn't as tense as he usually is and he got a good start".

"Got off to a good start in France"
Robert Bergh is on his way from Enghien to Grosbois as we are doing this this interview Monday afternoon. He has six horses stabled at Ecurie Etoile at the moment.
"I don't have my own stable in France anymore, so I prepare them at home and send them down here to race a couple starts. While they're here they stay at Grosbois" Bergh says.
"Balfour will make two or three starts down here but I haven't decided where and when his next start will be yet. We're off to a good start down here and Digital Archive won last week in Reims".

"Diamanten feels good going into the Breeders Crown"
Speaking of stars, both Diamanten and Muscle Hustle will race Sunday at Solvalla in the Breeders Crown semi finals which are included on the extra V75® card.
Diamanten comes from a win in the German classic Grosser Preis von Deutschland and was lucky with the draw and drew post four.
"Diamanten was great in Germany and trotted a very good time on the Hamburg track. He feel good in training after that and he should be good again".
"Muscle Hustle was sick last time in Gävle and we took it easy on him after that. He's trained well since and I'm happy with him now. But he drew post twelve and that's not easy" says Bergh.

"Has calmed down and doesn't pull anymore"
But before V75, there's V86® this Wednesday. It's split between Solvalla and Åby and Bergh has four horses on the card at Åby. Here are his comments:
"Officer C.D. (V86-1) got a tough trip on the outside on the sloppy track in his last start. He feels really good but I won't be too aggressive over 3000 meters. He's very consistent and races well pretty much every time. He seems to be in good form and no changes are planned, he'll race barefoot again".

"Mistake when entering"
"Honore d’Inverne (V86-5) is really developing nicely right now and he's in good form. He's raced on the outside lately and got a little hot in the can't see back so we'll race him in an open bridle this time. Post five behind the gate is perfect for him. He has a big gait and he can step out pretty well from the middle of the track. He's my best chance and he'll race barefoot again".
"Making Love (V86-7) has been good all year but he was sick in his last start. The trip to Berlin took a lot out of him and he had a break after that. He looks good now and has a good post but I don't really any feeling for him winning this time. There was a mistake when entering and I was supposed to drive Aileron. No changes".

"Looks incredibly good"
"Aileron (V86-7) won in a good way in his last start and he look very good smooth right now. Too bad with the post because he really looks incredibly good right now. I'm sure he will race really well even if it will be hard to win from post twelve over the short distance at Åby. Since he's a bit of a grinder he needs to get in to the race early and set the pace himself. He'll probably race really well and end up second or third and we'll see the winner come up the passing lane. No changes" says Robert Bergh.