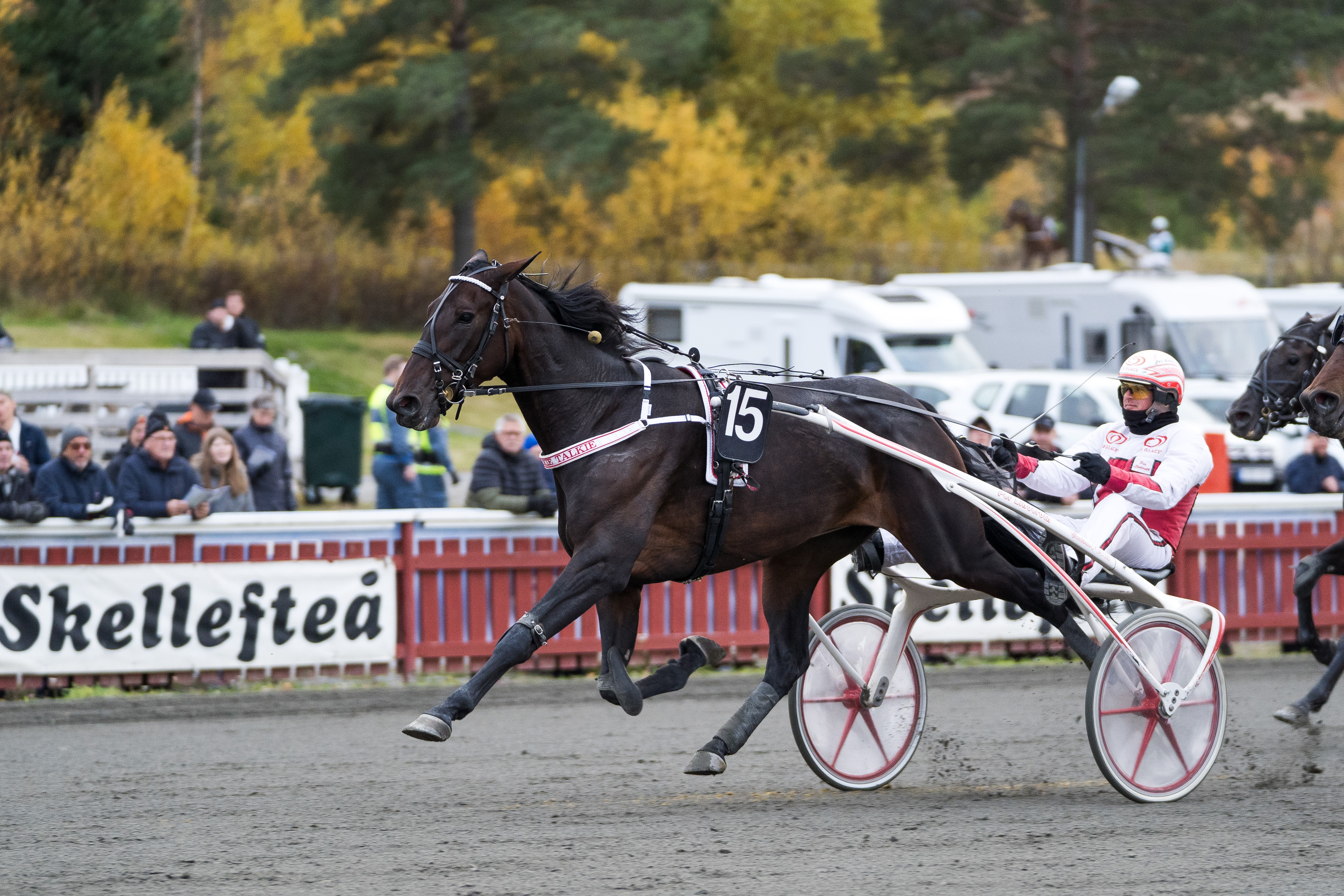 V86®: Could Walkie Talkie round the field again?

Probably the toughest one in the field - but from the worst post position again.
Per Linderoth's Walkie Talkie rounded the field to victory on V75® a little more than a week ago and she once again drew a bad post position in a mares race with 15 starters on V86® at Bergsåker.
"I'm super pleased with her now but of course we will need some help with the tempo again" says the Sundsvall trainer.

Five year old Walkie Talkie has made over SEK 600,000 racing against some tougher competition in the mares races this year.
In V75® at Skellefteå two Saturdays ago she rounded the entire field despite starting with a 20 meter handicap and from the second tier.
In this Wednesday's V86® race at Bergsåker the connections knew beforehand that the post position would be difficult again. The conditions on this handicapped mares race (V75-7) behind the gate were clear on that.
Walkie Talkie thanks to her having the highest earnings lifetime will have to start from the toughest post position - post 15 behind the gate over 2,140 meters.
Per Linderoth is out with Walkie Talkie on the farm in Matfors just outside Sundsvall as we get ahold of him this Monday afternoon.
"I've just warmed her up on the trail in the forest and we're on our way to the straight track so I'm walking her down the hill right now. She feels good after the Skellefteå start. She won't train any tougher now when she races only two weeks apart so I'm just maintaining her form" says Per Linderoth.
Walkie Talkie had to go three wide already with a kilometer to go in her last start. The tempo had been high upfront and she quickly advanced when Per asked her to go four wide in the last turn.
"It worked out great with both tempo and good cover. She had raced against better horses before, then the ones she faced at Skellefteå, but I still have to say that it felt really, really good winning that easily. The way she finished the race was great" says the trainer.
"Has shown that she can do some work herself"
The Wednesday start at her home track Bergsåker is a leg of Diamantstoet. Back in the summer Walkie Talkie won an apprentice race on V75 at Östersund with Mats E Djuse in the bike.
So the Skellefteå win was her second on V75 this year.
"She has raced well and kept improving all year. I haven't studied the race much yet but it's pretty much the same type of mares she's raced against all year. So that feels good".
Walkie Talkie will start from a tough spot but has proven to be tough herself too...
"Yes, she has shown that she can do some work herself. But she's left out to what happens from this post position. If the race turns out in a similar way as her last start did I think she'll finish top three again. If the tempo would be slower in the middle of the race, that would of course make it tougher for us. The forecast calls for rain and I'm waiting until last minute to decide the shoeing on her. If there's no rain and the track is fast she'll race barefoot all around as usual" says Per Linderoth.
You have two horses from your stable in V86-7. Elsa Mearas will start from post six with Ulf Eriksson driving. Her chances?
"She won two weeks ago in Östersund and she was good there. She got a pretty tough last kilometer so that was a strong effort. On the other hand she's in a lot tougher here compared to the race in Östersund. Walkie Talkie has a better chance thanks to the toughness she has acquired".
How would you grade Else Mearas' year?
"Not as good as Walkie's. They felt pretty equal in the beginning of the year. She hasn't had the bounces go her way so to speak. Normally she can leave very quickly but she kind of lost her self confidence a bit this past summer when she made breaks behind the gate twice within four starts so we started to take her off the gate. This week it feels like it would be time for Ulf to try to fire her off the gate for the first time since the summer".
Lolee Trizzofrock (V86-1) came into your training last winter and he started off with two wins. On Wednesday he will start from post one behind the gate.
"He has no chance getting the lead but he could get a decent spot. He's normally a horse who should do well in Klass II. He was bet down in V75 at Solänget but got locked in that time. In the V75 start after that we got away too far back while the tempo wasn't all that high upfront, I don't know how much he will be bet in here but I can imagine the bettors might forget about him since he hasn't been better than fourth in his last two starts. I want to put out a little warning here".