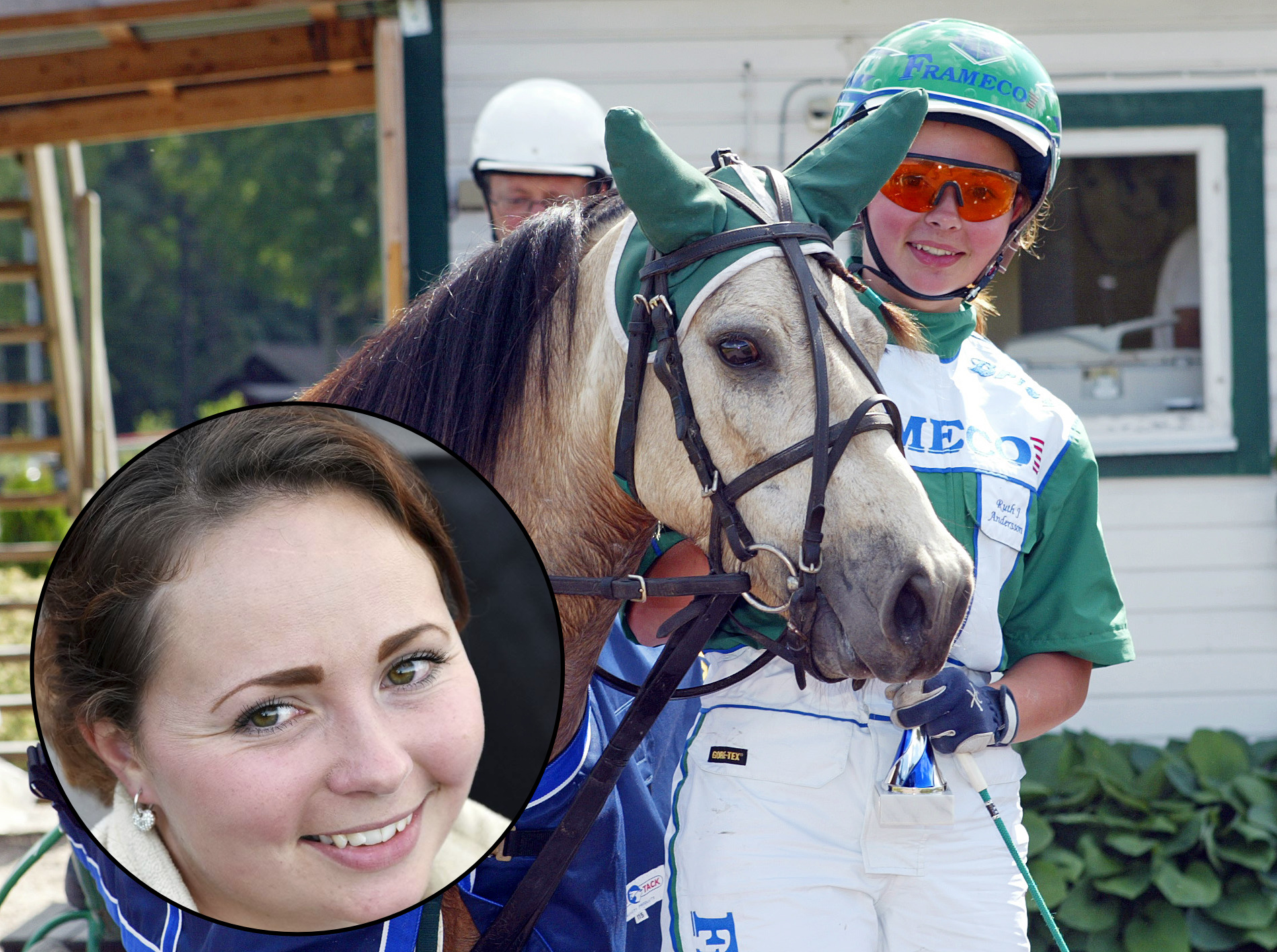 V86®: From racing ponies to winning at Solvalla

During their pony racing days she almost kept up with her brother.
Now the little brother is the star driver while Ruth J Andersson has quit driving and just trains. On Wednesday it might be time for a bigger win again for the Andersson siblings in Solvalla’s V86® with Je t'Aime Explosiv who won on V75® in his last start.

Their dad Jan trained horses as an amateur back home in Åmål when they grew up.
28 year old Ruth J Andersson had her own ponies and won several races in her teens.
She’s now a professional trainer since a few years and little brother Oskar J Andersson is about to start his own stable this coming spring after many successful years working for Jörgen Westholm.
Oskar J tops all the lad jockey standings with earnings of SEK 8.5 million and 76 wins this year as a driver.
“I’ve driven 13 races total but it’s a long time ago now and I’ve decided not to drive anymore, it’s just not my thing” says Ruth J Andersson.
She drove a lot more races with ponies.
Säby's Allan Cross was her favorite horse despite not winning a lot of races.
“I don’t know my stats at all but I’m guessing I won 15-20 races maybe. Oskar wasn’t that far ahead of me back then. Säby's Allan Cross was my favorite. I had always wanted a grey pony. Even if he was the most difficult little pony I have ever worked with we managed to get him broke and he turned out fine with time” says the Romme licensed trainer.
After winning a leg of Diamantstoet and one in Stodivisionen (mares division) Ruth’s biggest training win so far came in her last start. Oskar sat behind Je t'Aime Explosiv - new in Ruth’s stable - in a Class II leg as a part of the Grand Slam 75® in Karlstad and he knew what he was doing when he pulled the right line early in the race. 500 meters in to the race Je t'Aime Explosiv was parked outside the leader. Oskar has no problems driving off in the finish to win.
“He’s shown that he’s strong but we haven’t really decided on any tactics for this start. You have to be careful and not be aggressive every time with these horses, very few can handle it in the long run” she says.
Je t'Aime Explosiv is in V86®-6 at Solvalla. It’s a handicapped race with 15 horses behind the gate. A positive thing with being in the second tier is that the gelding has been afraid of the starting car earlier. A negative thing is that all seats are usually taken early when you try to find a spot” says Ruth.

“Not as sharp”
The Andersson siblings are already qualified for the V75® final the day after Christmas with the five year old gelding.
“He doesn’t have the same form as in his last start as it’s been a little longer in between starts. He feels great at home so there’s nothing wrong, he’s probably just not as sharp. So with this race he should be in really good form for the final instead”.
“I’ve talked to Oskar and he says we’ll have to play it by ear and go by how he feels this time and see what happens after the start. Whatever happens, we’re going to try to win the race. The horse is good. Oskar might not send him outside the leader early again, he’ll probably try to come from behind this time instead” says Ruth J Andersson.

“Can do the hard work himself”
Ruth’s friend Philip di Luca Wahlström owns the horse and did the training himself before he sent him to Ruth during the fall when he moved to Australia to work. Three starts since then has resulted in two wins and a seventh place.
“He was in great shape when he arrived. It’s a very nice and tough horse. He might not be a giant but he’s strong and he can do the hard work himself. Philip stays in touch and is involved in everything his horse does” says Ruth.

Studying to become a teacher
Their parents have bought a farm just outside Sala where Ruth is training. Dad is the handyman who builds paddocks and trails and also trains horses. Mom is feeding both horses and people on the farm where Oskar and his girlfriend Paula Pettersson also will be moving in.
The pony driver who became a professional trainer is studying to become a teacher and will graduate next summer.
“I don’t know yet how things will turn out. We’ll see what happens, I don’t have a set plan on how my life will be, if I’ll continue as a professor trainer or as an amateur. There will be horses, that’s for sure. Oskar is slowly getting started and we work together a little more for every day that goes by” says Ruth.
They’re the siblings with the middle initial J.  J means Jannica for Ruth and Jan for Oskar.