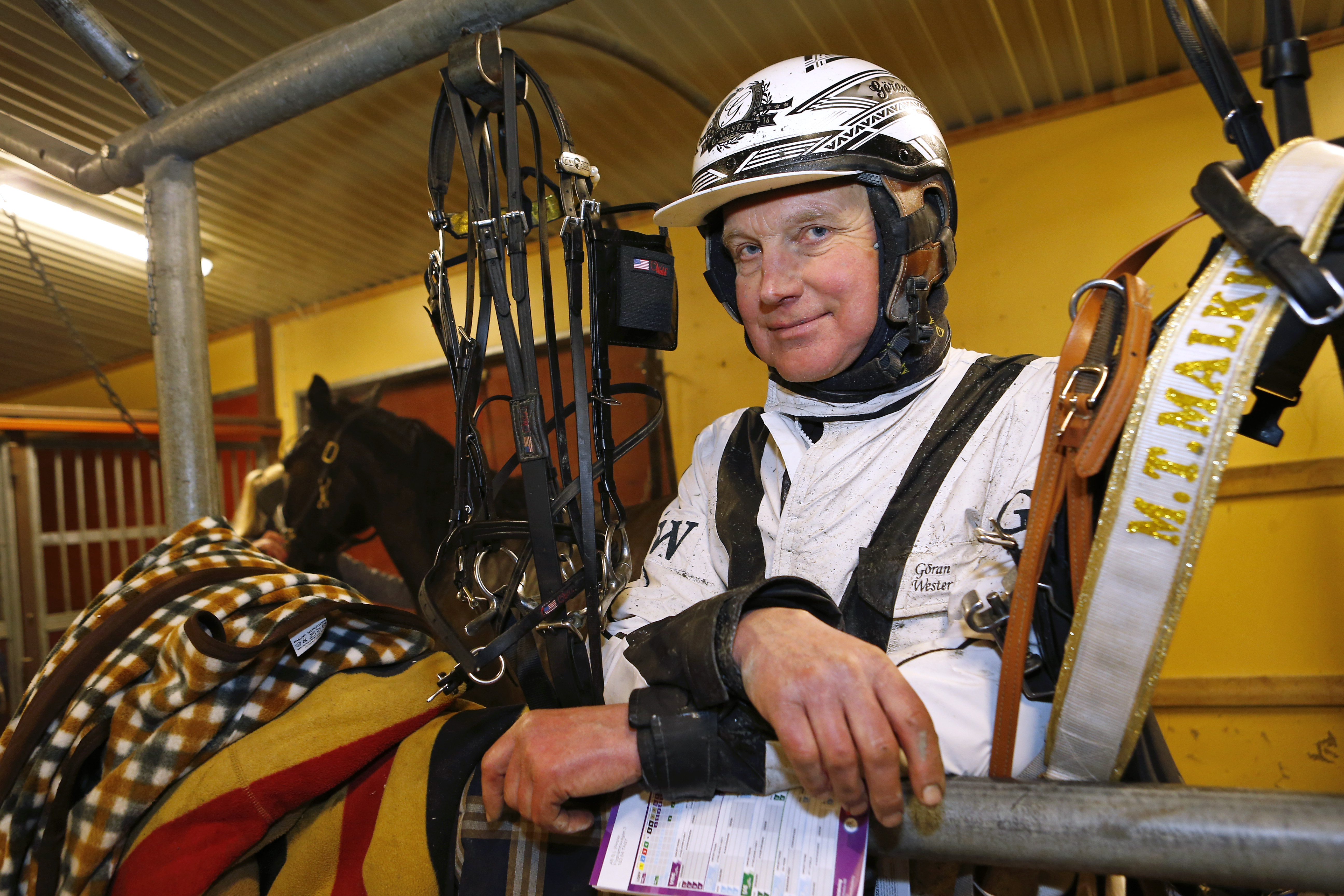 V86®: Horses are the medicine for Wester

A few weeks before Christmas he got injured when a horse kicked him.
On Wednesday the Solvalla licensed amateur Göran Wester is ready to win his second race after the accident.
"I was back at it pretty soon after the accident because 'horses heal' as I usually say" says Wester who has a pretty good horse in Eddy West in V86®-4.

Göran Wester has played the role of upset winner with It Happened Again but he has also been heavily bet with M.T. Malkin on V86® the last few years.
Four year old Eddy West has what it takes to become the best trotter he's ever had. On Wednesday he is the dark horse in V86-4 at Solvalla.
Post eight behind the gate on the middle distance lowers his chances of winning of course.
"The hope is to find a spot from the start. As an amateur you get nothing for free in these type of races, I'm aware of that. But my horse is in very good form and he's very capable" says Göran Wester who won the amateur trainers league at Solvalla as recently as 2017.
To go to the stable in the mornings is something that he is used to and doesn't want to be without.
Göran Wester co-operates with trainer Claes Sjöström, who helps out with the training of the horses Göran breeds.
"I try to always have one or two horses in training with Claes and go there to help out with the training twice a week. I also have my own stable at Sköldnora where I currently rent four stalls".
Accident struck back in early December when he was out with a young horse for Sjöström. The horse started kicking and Wester ended up unconscious. He broke his collar bone and also fractured several ribs.
"People helped out and I didn't have any horses at home for a month. When you're used to going to the stable every morning it soon feels very empty. I usually say that 'horses heal'. You have to feed them, you have to start jogging them. There's no alternative and then you get well faster" says Wester who has been back driving since the end of January.

Won his last start
His first win after the layoff came in the end of March. Eddy West was the winning horse. A four year old trotter who Claes Sjöström has been successful with. In February Wester took the horse home to Sköldnora and started training him himself.
"That's what I usually do. Claes has my younger horses for breaking and training".
Eddy West is the dark horse in V86-4. What are your thoughts from post eight?
"He is quick out of the gate but I can't use all of his gate speed here. We'll see how much I will leave with him. He can also close fast - so if we can just find a spot and they set a decent pace he can trot home very fast too. I drove him in an amateur race at Solvalla back in November and I sat last. I don't think I've ever come down the stretch faster than that" Wester says.
Any equipment changes for this race?
"No, we will go with shoes and a set earhood as usual. We raced him barefoot in his Kriterium elimination last year and he made a break so that didn't work out so well".
Eddy West is off to a good start of 2020 with a second place and then he won his last start. It looks like he's in good form!
"His form should be close to top form. I trained him last Saturday and he felt good. If he just gets a decent trip he could be right there at the wire. He had some issues last year. He's been rough gaited at times and has thrown in steps here and there. It isn't until these last two starts that he's trotted really well actually and it feels good that we've gotten there after all the work we've put into him".