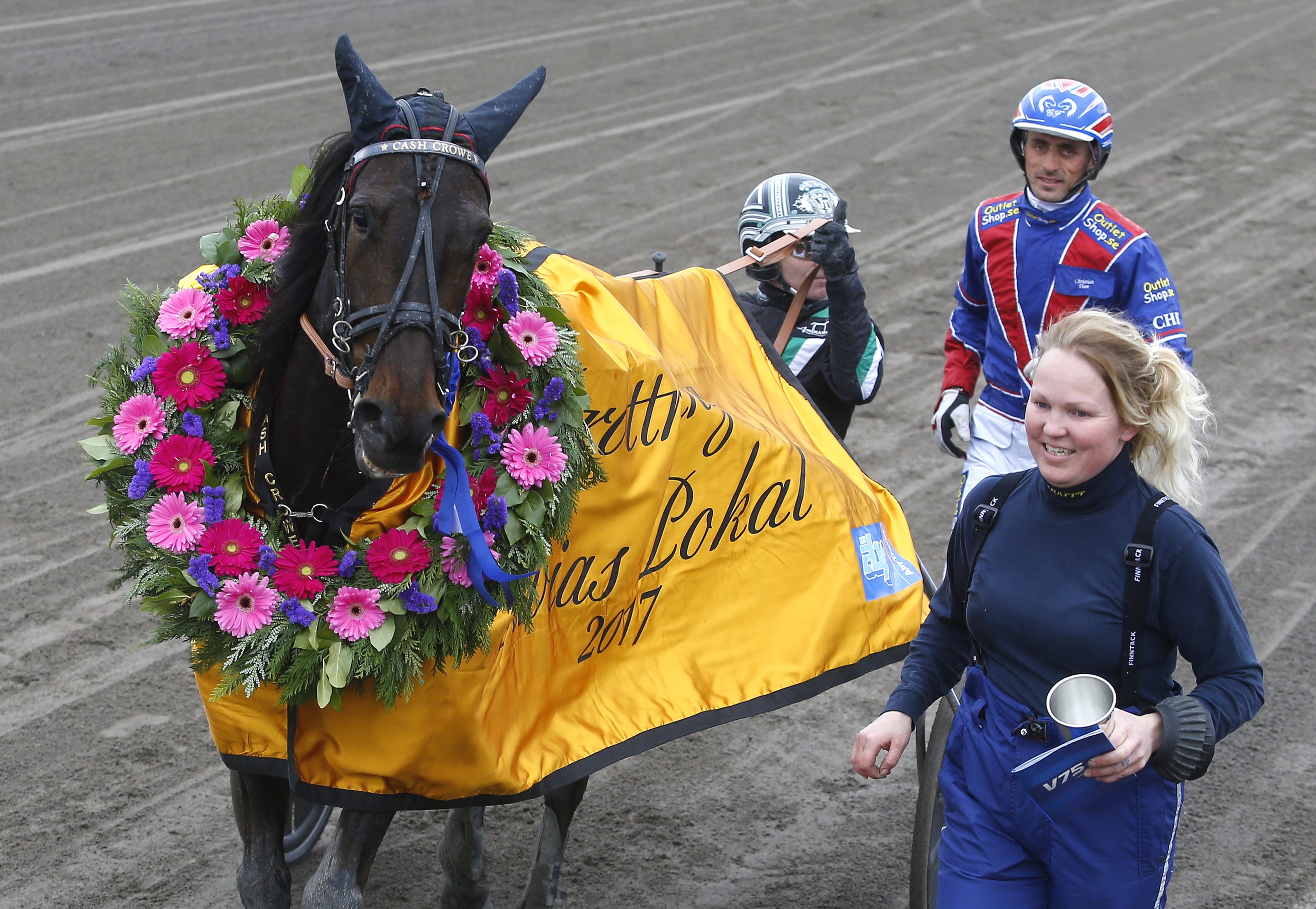 Laura Myllymaa is off to a great start as a professional trainer.
After the V75® victory with Othala on New years Eve she's now giving out another winner on this week's jackpot V86®.
"Neverendingdream feels fantastic. He'll go wire to wire" she says.

Laura Myllymaa got her professional trainer's license in December of last year and she has her license at Halmstad. She trains in Simlångsdalen together with her boyfriend Christian Fiore who also does the driving. Laura has worked for Petri Puro where she took care of horses like Cash Crowe (pictured) and D.D's Hitman.
"I worked for Petri Puro for three years and was his right hand in the operation and before that I worked in Italy for several years." says Laura Myllymaa.
"Petri taught me a lot about the trotting business in Sweden and I felt it was the right move to make to be a trainer now after working for many other trainers for so many years".
"Uphill training was something new for me and Petri taught me all about it. It's not something I like so I train my horses on the track and the straight track". she says.

"I knew she would be hard to catch"
Laura Myllymaa currently has eleven horses in training, including the three horses who recently joined her stable. The success came right away and that number is likely to increase if she keeps doing this well. Othala won right away after Laura got her professional license and followed up with winning V75® on New Years Eve. She did it thanks to a very alert drive from Christian Fiore who - despite starting 20 meters behind - was able to advance to the front early in the race.
"She had felt so great before the race, I know she would be very hard to catch if she would make it to the lead. I was happy to see her win, since she's been so good in training" says Laura.
Othala is racing on V75 once again on Saturday, starting from post five in V75-1.
"I wasn't planning on racing her there initially because we're aiming for V75 at Kalmar in the end of the month but she feels so good at home and since she's in top form we'll race her at Jägersro too. She's nine years old now and this will be her last year racing".

Believes in a long shot winner - "he's a fantastic horse"
Another horse in the Myllymaa stable is Nevernedingdream. The horse has previously been with five different trainers, with mixed results, but he seems to have found his best self with his new trainer. Neverendingdream made his first start for Laura at Åby on December 20th and finished second after a pocket trip. According to Laura he should be even better with that race in his legs and after a shoeing change. Neverendingdream is racing at Åby in a V86® that comes with a jackpot where a sole winning ticket would pay at least SEK 12 million. Neverendingdream has a perfect post one behind the gate over 1,640 meters and is - as this is being written - completely ignored by the bettors.
"Neverendingdream (V86-3) is one of my favorite horses. He loves to train and to race and he loves me, ha ha. He never gets tired and he's a fantastic horse to train" says Laura Myllymaa.

"Different shoeing and I want to see him in the lead"
"He was good in his first start for us but not perfect. He was too heavily balanced and had some problems in the turns. We've put some lighter shoes on him now".
"I wasn't very optimistic before his last start, but I am now. He's gotten better and better, he trains very well, feels great and his heart rate is low. He can leave very quickly and he feels so strong now that I want to see him in the lead. The post position is perfect at Åby and I believe he will trot 1:12 if needed".

How good of a chance do you think he has?
"Wire to wire. As good as he feels now I hope and believe that he will win". says Laura.