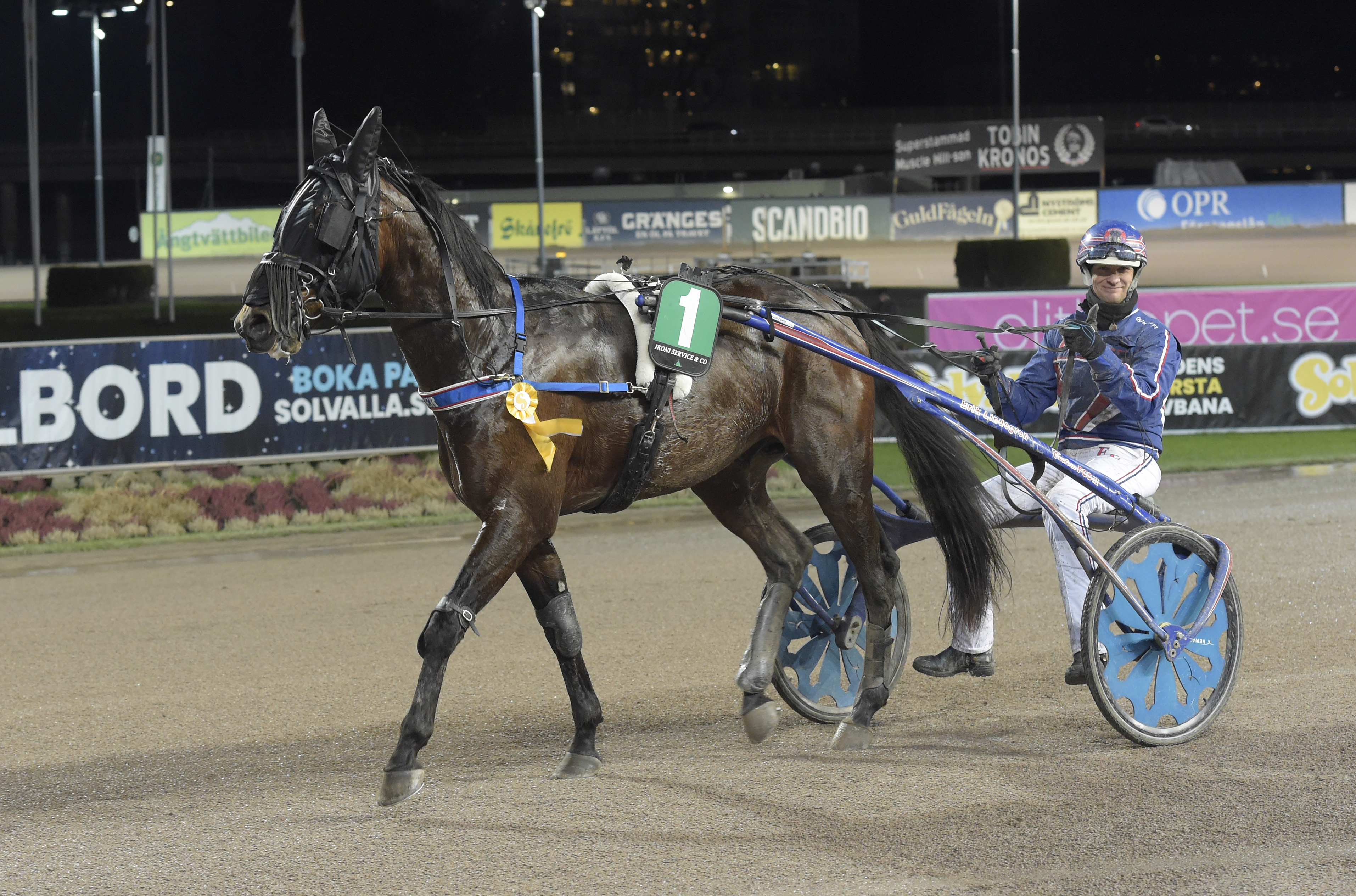 He has won eight out of eleven starts since December.
Erik Lindegren thinks highly of his promising four-year-old – with whom he is taking aim at the Swedish Trotting Derby.
But first, the horse is the favorite on V86 this Wednesday from a perfect post position.
"He has won without being empty every time and he's a smart and intelligent horse. He is incredibly strong and I'm not afraid to go first up" says Erik Lindegren, who also makes some interesting changes on his horse.

Solvalla hosts V86 this Wednesday and the card comes with a jackpot where SEK 13 million is added into the pool for all eight winners picked. Erik Lindegren has, from his small stable, produced the very nice four-year-old horse Ruger. The horse has made 14 career starts and won in eight of them. Except for one start when he was sick, he has never lost when staying flat. He has either won or made breaks in all the other starts. After a tentative beginning last year, things have gone much better since last December. That is when Ruger started his winning streak and won four starts in a row in just over a month.
"3 Ruger (V86-7) was born on the Aland Islands and I bought him there after he had qualified as a two-year-old. We were actually looking for another horse in the southern parts of Sweden and as we were on our way home again I was scrolling through my Facebook feed when I saw this horse. His breeder usually doesn't sell his horses, but we were lucky and were able to buy him" says Lindegren.
"I felt early that he was special, but he was very immature as a three-year-old and he made breaks in his first two starts. He didn't really get was racing was all about, and he was sick in his third start. But then he won at Gävle in the beginning of December, despite making a break and he started piling up wins. All his eight lifetime wins have come since December, and he has also missed twice on V75 and once in a Margareta race".
"Same heart- and lung capacity as Ochongo Face"
Ruger comes off two straight wins and he has not been tired in either of those two starts.
"In his last start at Gävle, we went to the lead and I had to use him a bit there. Once he gets to the lead, he's really not in a hurry, he can be quite easy going. But once he gets some company, he wakes right up. He's a pretty lazy horse, but once I pull that earhood off of him, he always responds well. He has no problems trotting at higher speed and he has won easily without being tired every time".
How would you describe your horse?
"He's a very smart and intelligent horse, who never does more than he has to. He's not particularly study, but after he has won and he comes back to the stable, he always screams. Other than that he is very quiet, like Ferdinand the Bull".
"I have said that he has the same heart- and lung capacity as Ochongo Face. If you compare their heart rates, they are both very good at recovering. Ochongo Face won many races first up and this horse has the same qualities. When he won at Bollnäs he was parked out after a pretty tough first 500 meters. So his heart rate and his strength are good and he also has a good gait. He has all those qualities that I like and from the horses I have trained, only Francais du Gull has been better so far".
"He can leave well, but in the beginning he was immature and made breaks if I tried to go full speed. He can still act like that if someone slows downs too much in front of him and the stonedust hits his face. He never wastes any energy in a race, even if I leave hard with him he comes right back to me" says Erik Lindegren.
The Gävle licensed trainer has big plans for his promising four-year-old and the big goal this fall is the Swedish Trotting Derby.
"I think he is a nice enough horse to be able to compete against better horses going forward. If he continues to race well and stays sound and healthy, we hope to make the trip to Malmö to race in the Derby eliminations. I think we will have a lot of fun with him going forward" says Erik.
"Less weight and first time American sulky - good chance to win"
But first, the Solvalla start on Wednesday where Ruger is the favorite in the seventh V86 leg. He starts from post position three behind the gate over the 2,140 meters. Erik also announces a couple of interesting changes regarding the shoeing and equipment.
"We were lucky to draw a good post and he can leave well like I said, but there are a couple of fast ones to our outside, too. I'm pretty much counting on Ulf Ohlsson going straight to the lead with Katalonia and then we will see if he lets me go or not. But she looks like a sprinter and when we sat outside of her in Bollnäs, Ruger beat her. My horse is strong and tough and I am not worried about her. Gambino Brick is also a good horse. If we can get to the lead, it would help, but he can win with a different trip too. I'm not afraid to go first up with him".
"He will race in an American sulky for the very first time and he will also race with less weight on his feet. He will wear light aluminum shoes upfront and regular shoes behind, instead of steel shoes. I would like to save the barefoot card for the Derby eliminations, but I might try it out in a race prior to that".
"If everything is normal, he should have a good chance to win. He is in against better horses now, but there are no easy races" says Erik Lindegren.