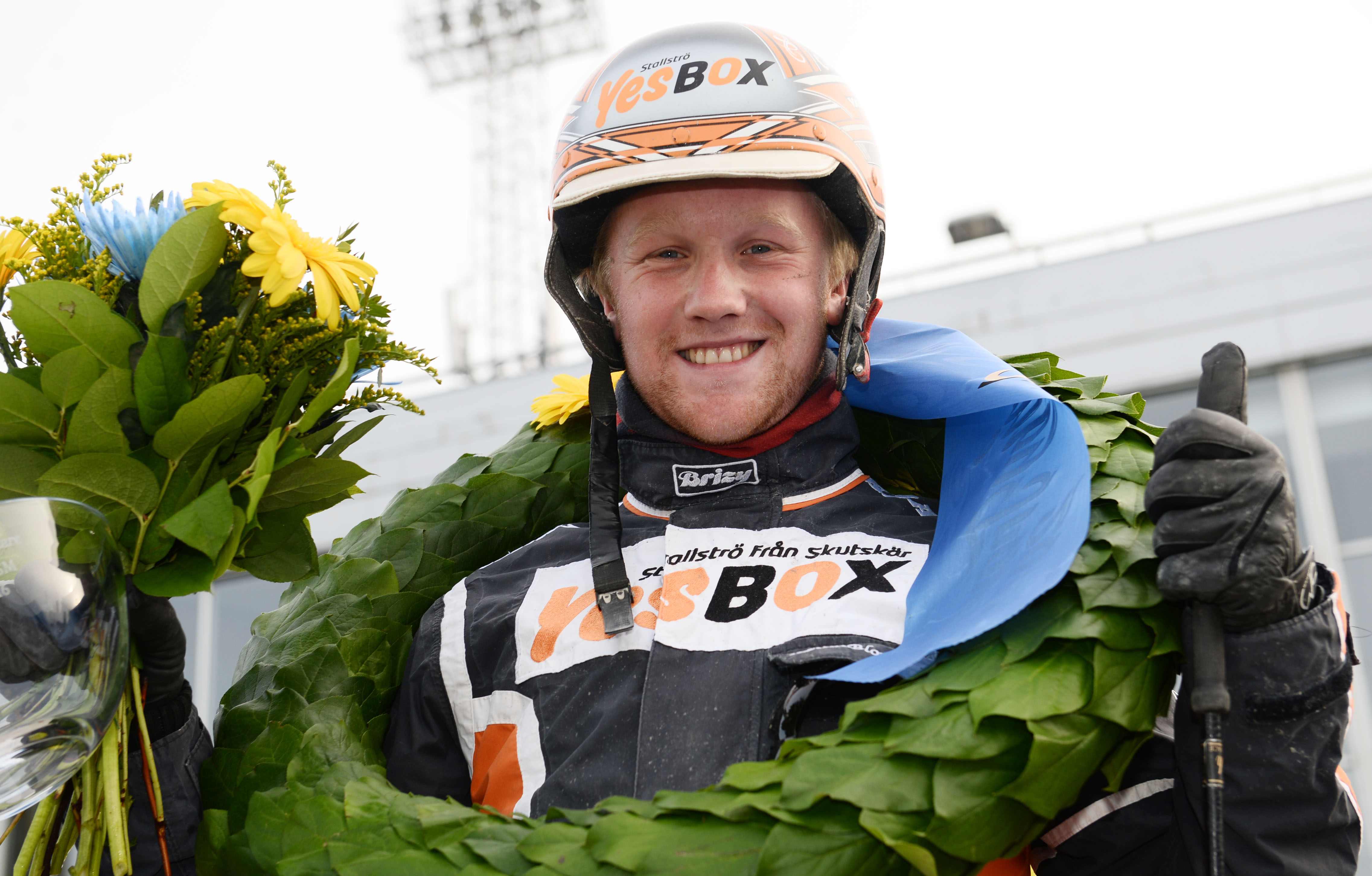 Oskar Kylin Blom has gotten a flying a start on his professional training career.
Meanwhile he keeps enjoying success as a driver and on Wednesday he's chasing three in a row with Lena Norin trainee Linda's Girl.
"I think I have a great chance to win with her" says the driver who has one more drive on V86®.

In January Oskar Kylin Blom started up as a professional trainer at Gävle racetrack. Despite having just a few racehorses it's been nothing but success and the same can be said about his girlfriend. Early June Emilia Leo took a double on V75® where one of the victories came with her own  Sign Me Up To. Later same month Oskar drove his own trainee Antonio tabac to victory in the final of High Coast Midnight Race. Together the couples has now surpassed SEK 1 million to their stables.
"Best so far was when Emilia won in Östersund, that weekend was crazy. She won three out of four races, one of them with Sign Me Up To. It was like a huge weight was lifted off our shoulders and a proof that what we do really works. Same thing when Antonio won at Dannero. Those two things top everything so far" says Oskar Kylin Blom who really values having someone to share the success with.
"It means a lot and it's a lot of fun when we both are having success. It also makes it easier and we try our best to help and support each other".
Received a scholarship
Since 2016 a scholarship in honor of Joakim Sandqvist is being granted every year. Halmstad trainer Sandqvist was only 28 when he passed away in 2014. Last week Oskar Kylin Blom was announced as this year's recipient with this motivation:
"This year's recipient is not only a good driver. He has started his training career very promising. Other than that his personality also makes Joakim Sandqvist's legacy  live on. A happy and positive guy with a past in racing ponies who is always there for you".
For Kylin Blom it was an unexpected but positive surprise.
"I never even thought about getting the scholarship. The motivation makes me very proud and happy. I know I'm doing something that people appreciate and that's what you want".
"Is a class better on the front end"
On Wednesday V86® comes to Sundbyholm racetrack in Eskilstuna where Eskilstuna Fyraåringstest wraps up the V86 card. Before that Oskar Kylin Blom has two drives on the card and with Linda's Girl (V86-4) he's looking to take the third straight win.
"At Visby she felt super and it was nice for her to be able to race on the front for once. Going in to her last start i was very optimistic beforehand but when the start list came out everything went wrong when she drew post eight. We pulled her front shoes for the first time and she lost a hind show during the race, but she was still able to hold on and win by half a length" says driver Kylin Blom who is happy with starting from the second tier on Wednesday.
"She races best on the front or first up (outside of the leader) and she is a class better when she's involved in the race early. As soon as I get the chance I'll be on the move. There are some good opponents but I hope she's gained some respect with these wins and I think she's got an excellent chance to win. She'll race with shoes".
Oskar Kylin Blom will also drive a horse that's new for him, the Håkan Wallberg-tränade Selma Töll (V86-2).
"I've never driven her before but i know she can leave quickly and I'm sure she'll get a good position from the rail (post one). My job is to find the right hore to follow, from what I hear she's not supposed to race on the front. She has raced well lately and I won't be surprised if she ends up top three with the right trip".