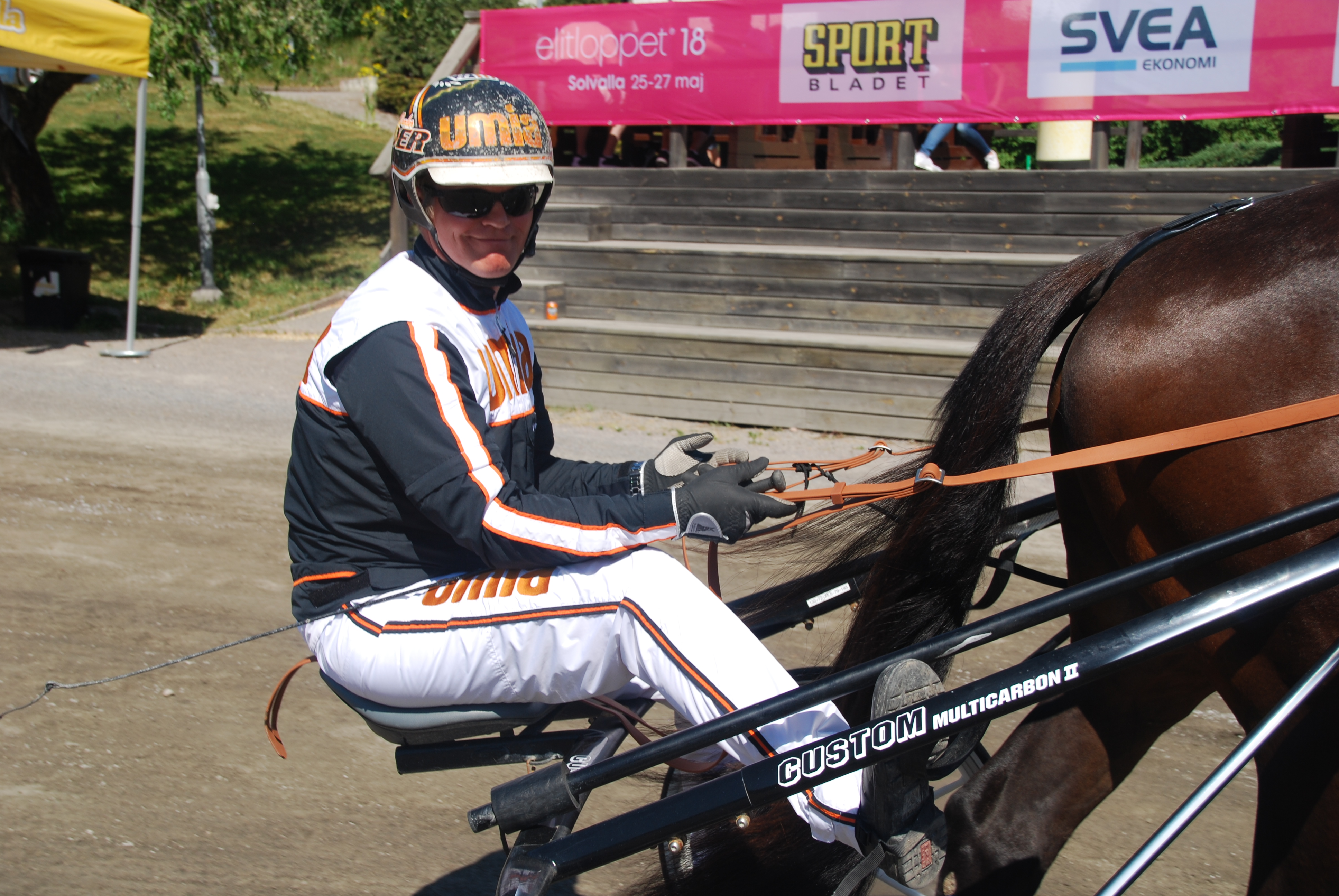 Two days before Christmas Eve his barn burnt down in a fire.
On Christmas Day he lost with his first favorite on V75®.
Robert Dunder is back and ready for 2019.
"I think we could start this year with a win" says the successful trainer who won every fourth start he made in 2018.

V75® at his home track Umåker on Christmas Day was supposed to be the finale of the best year so far of his training career.
Robert Dunder had entered three horses, all with decent chances to win.
Pleasure For Cash ended up being the biggest favorite of the entire V75 card.
But three days prior to that catastrophe struck at the farm in Sävar when the combined garage and stable building was on fire.
"I saw smoke coming from the roof of the garage so I went over there. That's when I discovered that the roof was on fire, it was very unpleasant" says Dunder whose instinct was to put out the fire himself.
"I ran to get water and a fire-extinguisher, but it was meaningless. An hour later the whole building had burnt down".
All seven horses were in the field at the time and were never in danger, instead the focus was to get the rabbits and chickens out.
No lives were lost but the material damages were vast.
Two weeks later all signs of the fire are almost gone.
"There's nothing left, everything is cleaned up. The insurance company is coming up with a decision this week and it looks like it's gonna be resolved decently" says Robert Dunder who now has all his horses stabled at Umåker race track instead.
"The plan is to build up a new barn and have it ready by summer. Most of my horses were stabled at the track already so it hasn't been that much of a change for me. I just don't have a stable to go to in the mornings and evenings".

"The oldest horse is five years old"
The three horses who raced on V75 on Christmas Day finished second, third and fourth.
A good result, but yet a miscalculation.
"After the races it felt like a semi bad day at work. Our Soleado put up a great effort as second, but Pleasure Cash wasn't on top. He got way too hot and wasted too much energy. Had he just been his normal self he would have won, so that was disappointing. It wasn't the best way to finish off the year".
But overall 2018 was a success for Dunder.
A win percent of 24 is something most trainers won't reach and the SEK 2.2 million in earnings is the highest so far for the 33 year old after four years as trainer.
"We had a good year, the best we've had so far. We made a lot of money and our average per start was good. Thanks to the horses staying healthy all year. The year before we had a lot of sickness".
What's the goal for 2019?
"To make even more money and win more races. We have nice horses and good owners behind us, so now we have to just do our job".
And get that first win on V75?
"Of course. The oldest horses in our stable are five years old like Our Soleado. Which means I won't get many chances competing on V75. That made it extra tough to not get a win on Christmas Day. But we'll be back and hopefully luck will be on our side".

Not as aggressive
This Wednesday it's V86® and not V75 on the program.
Our Soleado drew post twelve in V86-5, but will still be one of the favorites in the race due to his impressive efforts lately.
"I'm very pleased with his efforts lately but not with the results. He's been stabled at the track all along so the fire didn't mean any changes for him. He never impresses in training but there are no signs of him going down in form. I also plan on taking some weight off of him for this start".
Could you specify that?
"We will switch from a light steel shoe to an aluminum mushroom shoe. I will shoe him tonight (Monday) and try it out tomorrow (Tuesday). if it works out, he'll race like that on Wednesday which would be the first time".
No other changes?
"No. There is more to do on him since he's racing in a regular sulky and with an open bridle and set earplugs, but that will be later on".
You drove him very aggressively in his last start, will it be the same tactics now?
"No. I really thought we had a good chance to win and drove accordingly in his last start. I'm not saying he can't win this start but I will try to get someone to follow. That means we'll be left out to how the race will unfold. If the tempo is high, he's definitely good enough to win, but we need some racing luck" says Robert Dunder who thinks he has a better chance to win in his first start of 2019, in race 1 - before V86 - at Bergsåker with first time starter Lupin Håleryd.
"Yes I think we can start the year with a win. It's a very nice horse who came to me a month ago and she's been training well. She seems to have a lot of ability. If she's alright and can handle the trip to Sundsvall without getting too nervous, then I think she'll win".