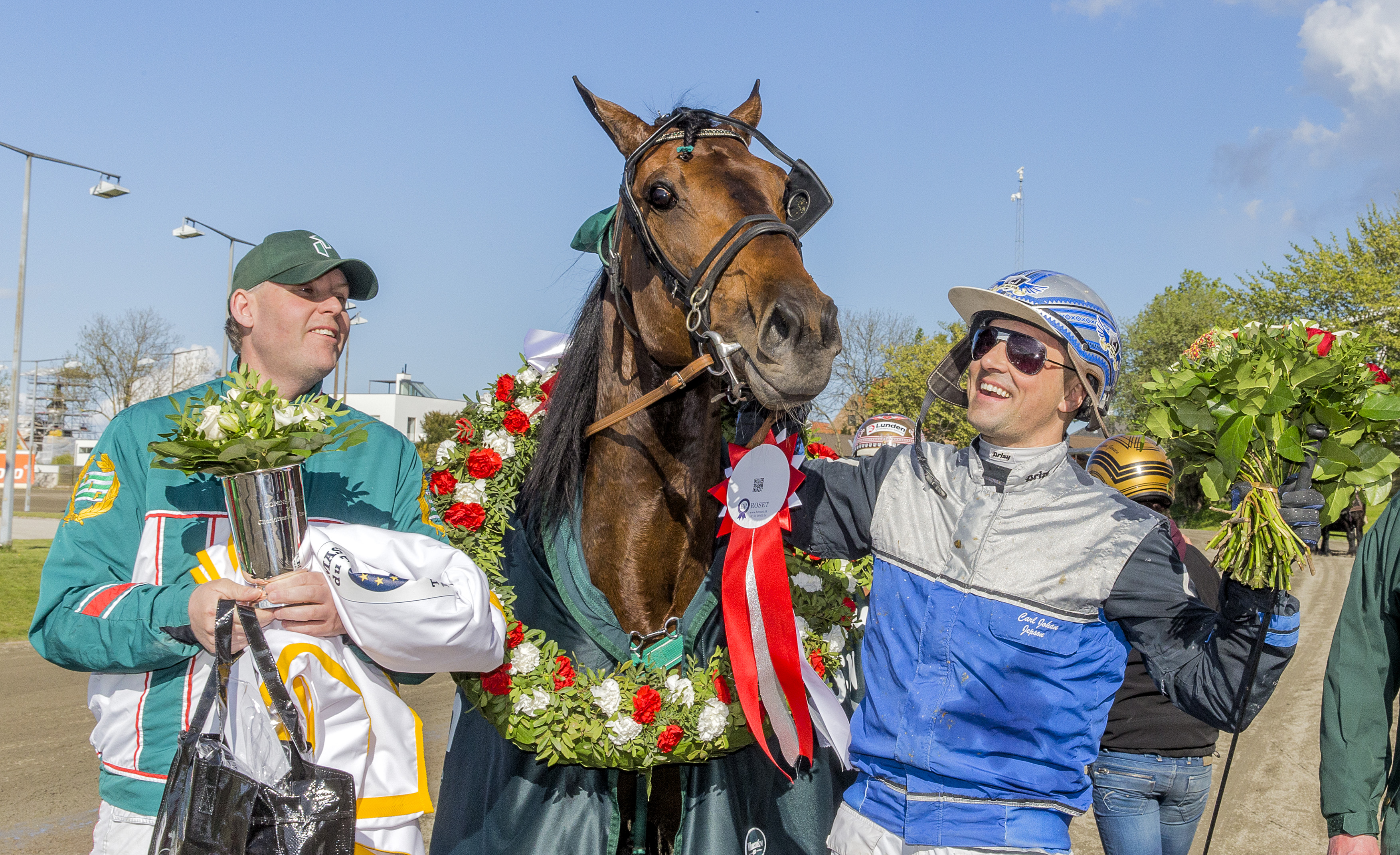 In his last start he made sure a sole winner took home over SEK 16 million.
On Wednesday Wollafur is back on V86® - and his trainer thinks he could strike again.
"When he gets his ground saving trips he usually ends up on the photo" says Juhani Partanen, who has two more chances to win at Vaggeryd.

The V86® summer tour goes on and this week Vaggeryd will be the host. V86-1 will go off at 19:20 and around 1 1/2 hour later, in the fifth leg, Wollafur will enter the track. When he last raced three weeks ago he sprinted, as the least favored horse in the race, to victory and was a big factor when one single ticket took home the entire pool.
"I had actually expected a good effort. He had been injured for some time and had gotten three starts in his legs and improved with each start. I also thought it looked like a wide open race with some questions regarding some of the horses. Plus he got the trip he needs, a ground saving trip where he could sprint home" says Juhani Partanen.
How has he been training following his last start?
"He's been training as usual. I haven't sharpened the training or anything like that, but everything seems fine".
No indications of the form declining?
"No, quite the opposite. Now he's gotten four starts since the injury and they usually go forward with each start".
What type of injury did he have?
"He got kicked in the field and had a hematoma as big as a football on his rear end. All we could do was to give him time and wait it out. He just did some light training all winter and I think that did him good, to train without racing for some time".

Needs his trip
As opposed to his last start, Wollafur will be much more bet this time. But since he's a horse who needs a trip it's not very easy to evaluate his chances.
"I don't know the other horses in the race but my horse is in good form, so that's all good. But he can just leave ok so he needs some racing luck along the way".
Is the short distance a disadvantage since he doesn't leave very fast?
"I don't think so. He can handle all distances as long he gets his trip".

Wire to wire?
In the following race it will be up to Valners Isidor (V86-6) to defend the Partanen colors. This five year old won three out of five starts last year and will make his first start of the year here.
"He got hurt after his last race at Solvalla. Right after the finish line he threw himself to the right and wrenched a hind leg. It has taken some time but he feels good in training now".
How sharp is he?
"He's been to the track three, four times and the fastest he's trained was 1:17 over 2,100 meters. He felt very good doing that".
He's done most things right so far. How much potential does he have?
"He's done everything right actually and could have won all five starts. He can leave, he's safe and he can sprint home very well if he races from behind too. I'm sure he can climb through the classes since he's in such a low class still. But you never know with horses, I've had some very talented horses who never turned out, so you don't want to say too much. But he feels like a good horse".
Since he usually takes the lead I assume the tactics are set?
"I don't know how quick the others are but if I get to the lead I will race him there.
He made a break at the start in his first career start. Is there a risk of him getting too sharp and making a break in the start after his layoff?
"I don't think so. That was volt start so we can forget about that break. He's normally very safe".
How do you like your chances?
"It looks good on paper..."

To give up the lead is not an option
The third starter on V86 from the Örebro trainer's stable is Albert G. (V86-7). In his last start he had to settle for second place in one of the World Driving Championship races, after having been parked outside the leader.
"He wasn't even a little bit tired after the race. The horse who won is a good horse, but had a driven him myself I would have kept a higher pace the entire last kilometer. That way, the winner wouldn't have gotten out. My horse feels very alert in training after that race".
Long distance this time. What's your take on that?
"It doesn't really matter to him, he likes to race on the front or outside the leader. When he has a horse in front of him, he won't pick up the bit. It might look a little strange when he's 40-1 and I drive aggressively, but he'll only go if he's on the front or parked outside the leader".
In other words, you'll do anything to defend the lead from your inside post?
"I hope he will keep up the lead and then I will not give it up, since he is the way he is. I'm sure someone will try to come at me and I know there are some good ones in the race, but if I get the lead I will race him there and then it is what it is".
How do you rank your three horses' chances to win?
"Hard to say. Valnes Isidor is probably the one with the most ability, but he's been off for a long time and he could come up a little bit short. With Albert G. it's completely up to the trip he gets and same thing goes for Wollafur. I have a hard time gauging their chances, but it feels like they all can win with some racing luck".