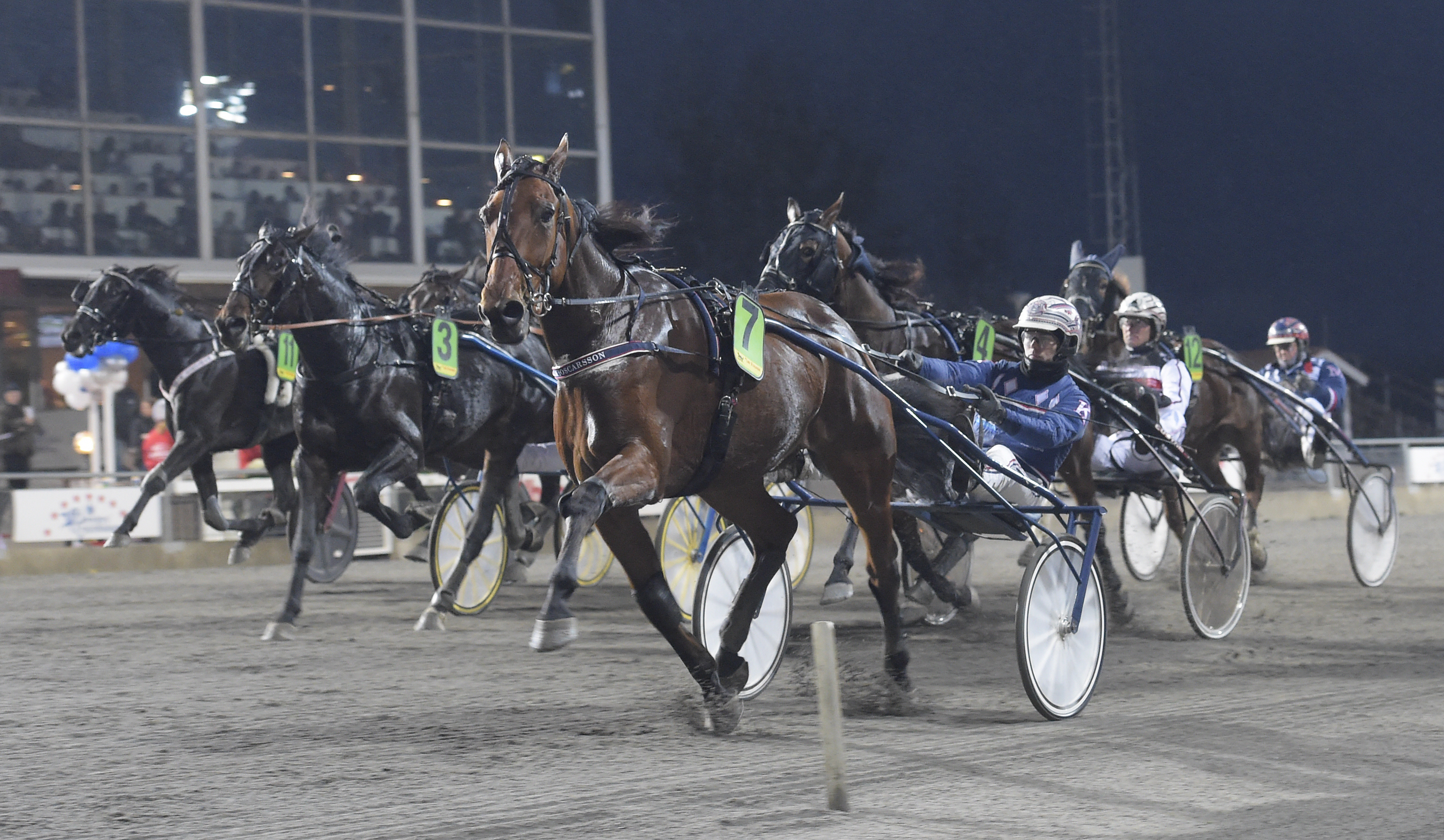 He started the year with five straight wins and played upset at his recent V75® victory.
On Wednesday Roofparty continues his impressive debut season with a V86® start at Solvalla.
“We should have a good chance getting the lead from a perfect post” says Kevin Oscarsson.

When Roofparty in his last start catapulted to the lead from post seven and never looked back to win easily, many V75® bettors were scratching their heads. The tote board read 24-1. Everyone weren’t as chocked though.
“I was actually not that surprised.  Sure we kept our expectations down from that post and with good horses inside of me I didn’t really think we would manage to get to the lead even if I thought we could get there if we had some luck and we did. I knew he was good enough to win once we made it to the lead” says Kevin Oscarsson and explains:
“He had gotten some tough training before the Breeders Crown semi final and the plan was for him to take a step forward with that race and be really good in the final. Now he didn’t make the final but the plan worked and he was really good”.

Very sick as a two year old
Roofparty made his first career start in February of this year and has won seven out of 14 starts so far.
“He’s had a very good year. The starts he hasn’t won he’s had to go too hard to make the lead or to sit outside the leader and a few times he’s raced against tough horses like Perfect Spirit and Villiam and done well behind them. He’s improved with every race”.
Kevin’s dad Jim Oscarsson is the trainer of Roofparty and he had high hopes for this horse early on. But he almost didn’t make it to the races at all.
“Dad had 15 horses in that crop and Roofparty was the one he always bragged about when we spoke. But he developed an issue with his heart and was lucky to stay alive. He spent a long time in the clinic and had almost six months off from training to heal properly. The fact that he got all that time is something he benefits from now and if he stays sound and healthy and develops the way we believe he will, then he could go far. He’s quick out of the gate, strong, speedy, he races well off cover. He has a lot of what it takes to be a good horse”.

Record numbers for both horse and driver
Kevin Oscarsson returned home to the family business after a few years in Halmstad. At the same time Team Oscarsson moved to Söderberg Gård in Märsta.
“It feels good! My girlfriend and I have gotten settled in both in our apartment and in the stable so everything feels good”.
With earnings of SEK 4.5 million Team Oscarsson is having their best year so far on Swedish soil.
“It’s SEK 2.5 million short of what we made in the U.S. but the horses have done well all year. Of course the hopes are to get that super star but it feels good to have a good foundation in the stable with many good horses who have bright futures ahead of them. We also have more yearlings than we’ve ever had so it looks good”.
23 year old Kevin who is licensed as ‘elite stable lad’ has with earnings of SEK 6.6 million so far this year surpassed his record from last year by over SEK 500,000. In January he’s going to school for the first class to become a professional trainer.
“The plan is to take over the business from my dad at some point but exactly when is still up in the air. I’ll gradually take on more responsibility and ease the workload for dad more and more as time goes by, depending on how he feels”.

Perfect post position
Back to Wednesday’s race with Roofparty.
The fact that it’s been almost a month since his last start is nothing Kevin thinks has a negative effect on his form.
“He might not have taken another step forward after his last race but he’ll be at the same level. His heart rate is good in training and he should be in same form as in his last start. Equipment wise the only change is that he’ll race with corks in his hind shoes as opposed to shoes with grip in his last start. It’s not a big change and he has trained with corks in his shoes at home so he’s used to that”.
From post five behind the gate it’s no secret that the first goal is to get to the front.
“He leaves best from post four and five so the tactics will be the same as last time. But I don’t think they’ll let me set my own pace this time. I have a lot of respect for Short In Cash, a horse I’ve seen many times and also won with myself, so I know he’s a good horse. There are other good horses in the race too. If we can get the lead and maybe slow the pace down a little bit I won’t be surprised if he is battling for the win. He should definitely be top three”.