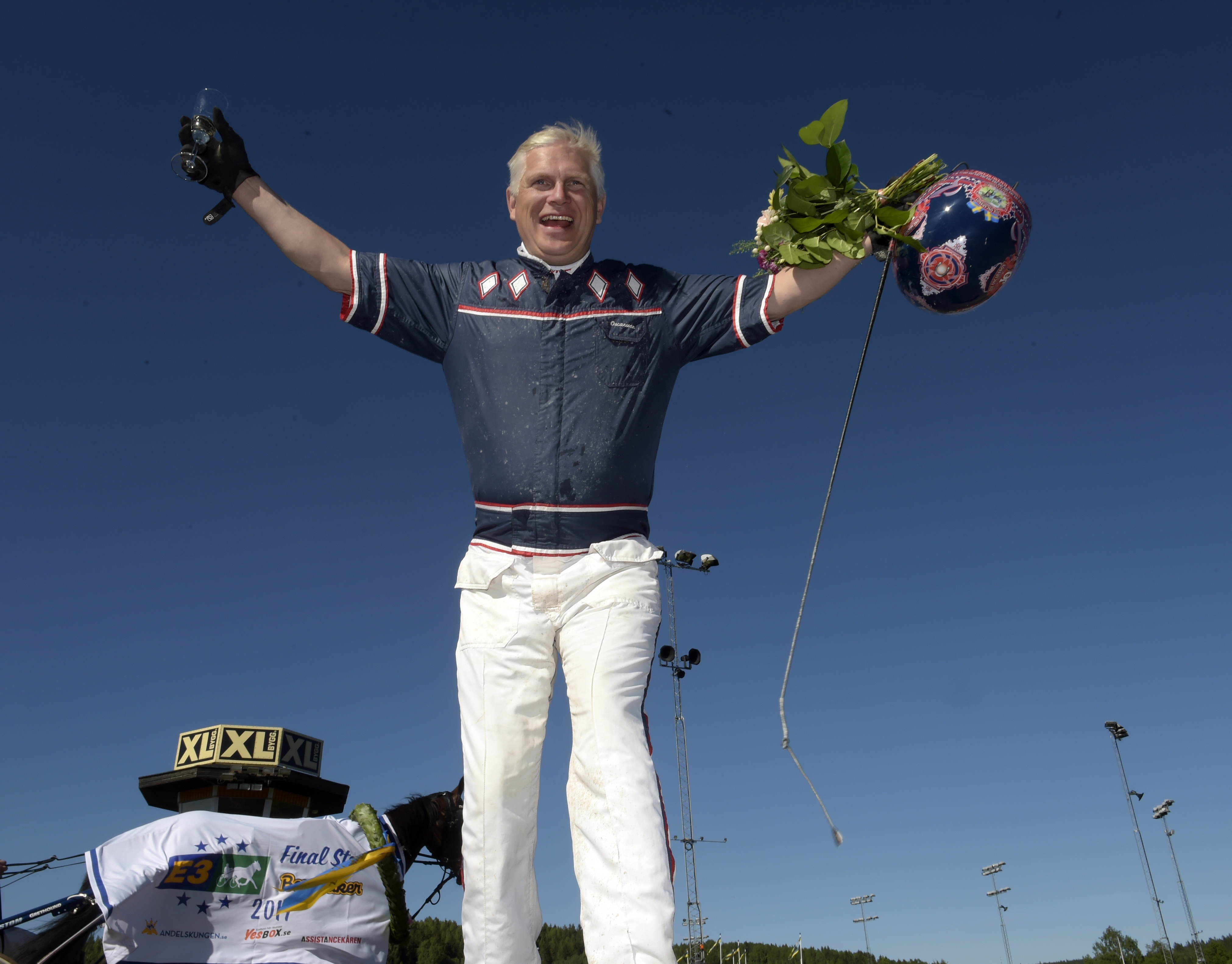 A new training center.
More horses in the stable.
The son has returned home.
"Everything feels perfect now. Next year we aim to break our earnings record" says Jim Oscarsson who sends out three horses in this Wednesday's V86®.

A month has gone since Jim Oscarsson moved his stable from Julmyra in Heby township to Söderby Gård just outside Märsta.
Something he doesn't seem to regret.
"This feels darn good. The training conditions here are perfect for me and at the same time they're in the middle of improving the training center.  Rome wasn't built in one day and there are things to do and the owner is doing just that we really like it here. The horses and I got a new spark" says Oscarsson who after his short and very successful career in USA 2012-2013 has had a few ambulant years since returning home.
Over there he managed to win the world's most prestigious two year old stake Peter Haughton Memorial with Aperfectyankee and he also trained a certain Nuncio to finish second in the same race the following year.
Last year's biggest score was when Violet Bi won an E3 final for fillies.
Something that apparently woke the owners up.
"Why I've had so many new horses come in to my training, I really don't know. You'll have to ask the owners, but hopefully it's because of the success we've had. We have a big owner who has always backed me, but also some new and some returning clients. I bought two yearlings at the sale this past weekend for a guy I trained for in the 90s and he's been away from the business since then".

Trains differently
As of now he has 56 horses in training but that number will be higher once the yearlings are added.
"I've never trained this many, not even in USA. It's very inspiring and that's what I dreamt of when we made the move back home and we've finally gotten there".
So now you'll beat your record in earnings over the next few years?
"Yes, that's the goal. We've increased the earnings every year since the return and we hope to continue doing so. In my last year in USA we made SEK 6 million and we haven't beaten that yet, but we will. Hopefully already next year".
Do you train the same way now as you did in the states?
"Not at all. Especially since moving to Söderby Gård, there are much more options for variation here than at Julmyra. We can go jogging in the forest which both I and the horses appreciate. In the states everything is done on the track. It's a much tighter schedule and you have to have them ready in May of the two year old year if you want to make any money with them. It's not the same stress here and I like that".
Do you ever miss the states?
"I do, sometimes. I especially miss buying horses at the sales there. But I'm actually going over to the sale in Harrisburg in November to try to buy something. That will be fun".

The son gets the first pick
Since a couple of months back Jim also has one of the country's most promising drivers to his disposal.
His son Kevin moved back home after three years with different trainers in the Halmstad area.
"I'm very happy for him and all the success he had down there. It was a good time to come back home when we have so many horses coming in. It feels great working together again, everyone's happy and I'm looking forward to the years we have ahead of us.
Does Kevin have a bigger role in the stable now than before he left?
"No, it's about the same as before, but of course we brainstorm and try new things. We always have. One thing is different though; Kevin gets to pick first if we have two horses in the same race".
That's the case on Wednesday in V86®-6 where they're racing their own breedings Mr Perfection and Mr Perfect.
"Kevin believes Mr Perfection has a better chance and picked him. But I have another gear in my horse if he's in the right mood. Check with me after the warm up and you might get a nice long shot" says Jim Oscarsson.

Here are Jim Oscarsson's thoughts on his V86 starters:
"7 Livingchic (V86-4) came to us from Estonia and she needed some time. We've given her nice trips to toughen her up and she's been locked in a few times. In her last start it was time to try her in the lead and it was nice to see her hang on for the win. She's a filly under development and I think she will have a nice winter at Solvalla. She can leave fast, but if it's enough to get to the lead from post seven is hard to say. I don't even know if I want to race her there, we'll see. She feels good in training after her last start and should be further improved now. We'll keep racing her with shoes, blind bridle and in a regular sulky. Without knowing the opponents all that well, I think she can end up on the photo".
"8 Mr Perfection (V86-6) had a tough spring racing and he got a little tired after that, he had no go in the summer. After we moved to the new farm we changed his training schedule completely and it seems to have helped. He feels much sharper now and his last race was good. He feel great after that and should be further improved now. The post position is tricky and he needs a trip, but if it works out he could step up. We'll race barefoot again, but in a regular sulky since it's volt start".
"10 Mr Perfect (V86-6) also likes the move to the new farm with different training and he's on his way up. He had lots of bad luck in his last start and got interfered with several times so he raced well considering that. He has raced best in a blind bridle but it only helps him when he's in top form, so we haven't raced him in it for a long time. Most likely he'll race open again, but if he feels really sharp in the warm up, I might put that blind bridle on him - then he could be a nice longshot. No other changes."