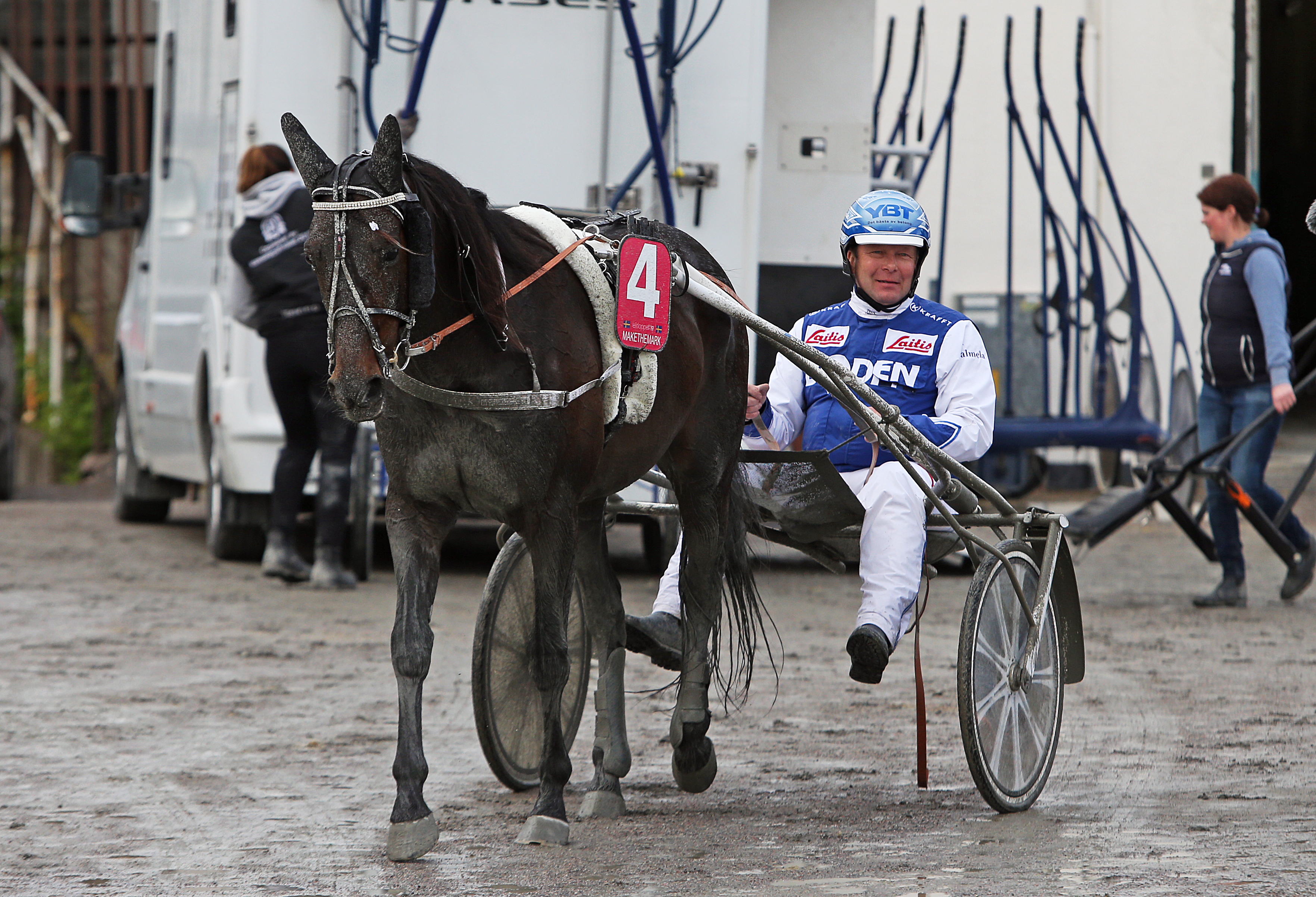 Six months of preparations are over.
On Wednesday Makethemark is ready to make his 2020 debut.
"Nowadays there aren't many horses that can make me nervous. But on Wednesday I will be a little bit anxious. At the same time I've begun to trust him" Petri Salmela about his poster boy.

His third place finish in Elitloppet was his definite breakthrough in the elite.
When Makethemark will make his first start of the year, he will do it as one of the country's biggest trotting stars.
For trainer Petri Salmela it will be the first confirmation that the winter training has given the desired effect.
"We set up a plan back in November. Due to the weather we haven't been able to follow it completely, but overall it has worked out fine. Compared to last year he has gotten an extra month of training and he has trained more heavy training" says Salmela who usually prepares his horse with a heat in racing like speed before returning to the tracks.
"A week and a half ago we took him in to Solvalla to train. He trained together with Lady Zappa, who got a 20-30 meter head start. Already when I put the race bike on him, he knew what was going on and when we came up on the outside on the second lap, I wasn't able to go any slower than 1:12 speed, he just decided he was going to pass the other horse. We trained the heat in 1:17/2,000 meters and I was happy with him, he feels similar to how he felt before his first start last year".

"Will race at the same level"
Last year's seasonal debut came in 'Rommeheatet' where he after a nice trip along the pylons was able to win in 1:11.4/2,140 meters. Finishing right behind him were Sorbet and Milligan's School, two horses who later went on to accompany Makethemark in Elitloppet.
"My horse was good then but not in top form and he won't be on Wednesday either".
"We will also wait with pulling his shoes. The plan is to race him at Romme on April 12 and then for him to be in top form for the final of 'Paralympiatravet' two weeks later".
Is it possible that he could be raced in the lead on Wednesday?
"That's hard to say. Of course it's an advantage that Perfect Spirit will start in the second tier, but you never know how the race will turn out beforehand. When he raced in the lead at Bollnäs last fall he was already on his way down in form so I don't worry too much about the fact that he lost that race, but I always leave the tactics to Ulf Ohlsson".
How do you like his chances?
"That's hard to answer. Most important for us is that he gets a race and that everything is well with him, at the same time I think he will race at the same level as he did in his seasonal debut last year. But I have no idea how well prepared Perfect Spirit is, for instance. It will be fun and exciting to get to see him race, I've been waiting all winter for this" says Petri Salmela.

"A very nice horse"
This is what Petri Salmela has to say about his other horses on V86®:
"6 Lady Zappa (V86-2) is a typical barefoot trotter who has to wait for the tracks to get soft so she can race without shoes. She trained at Solvalla together with Makethemark and was good, but these conditions aren't her best. She is better on shorter distances. I don't think she's in any worse form than she was when she won her seasonal debut last year, but due to the distance I lay low here".
"6 My Sweden (V86-4) is a very nice horse who was far from tired when he crossed the finish line in his last start. Had he gotten out in time, I think he would have given Strong Heartbeat a fight for the win. This start is a step on the way to the finals when he's supposed to be in top form, but I think the form is the same as in his last start. My horse likes the front end, but I hope the driver can avoid getting parked on the outside if he can't reach the lead. The way I see it on paper his chances are just as good as Makethemark's".
"6 Cupido Sisu (V86-6) had a minor throat surgery done before his last start and it seems to have worked out the way we hoped, he crossed the finish line at full speed with the earplugs in his ears. His form is pointing up and I think he will trot 1:12 here, but of course that's not good enough against the best ones, including Makethemark. But I think you need to watch out for him in the future, he's on his way up in form".