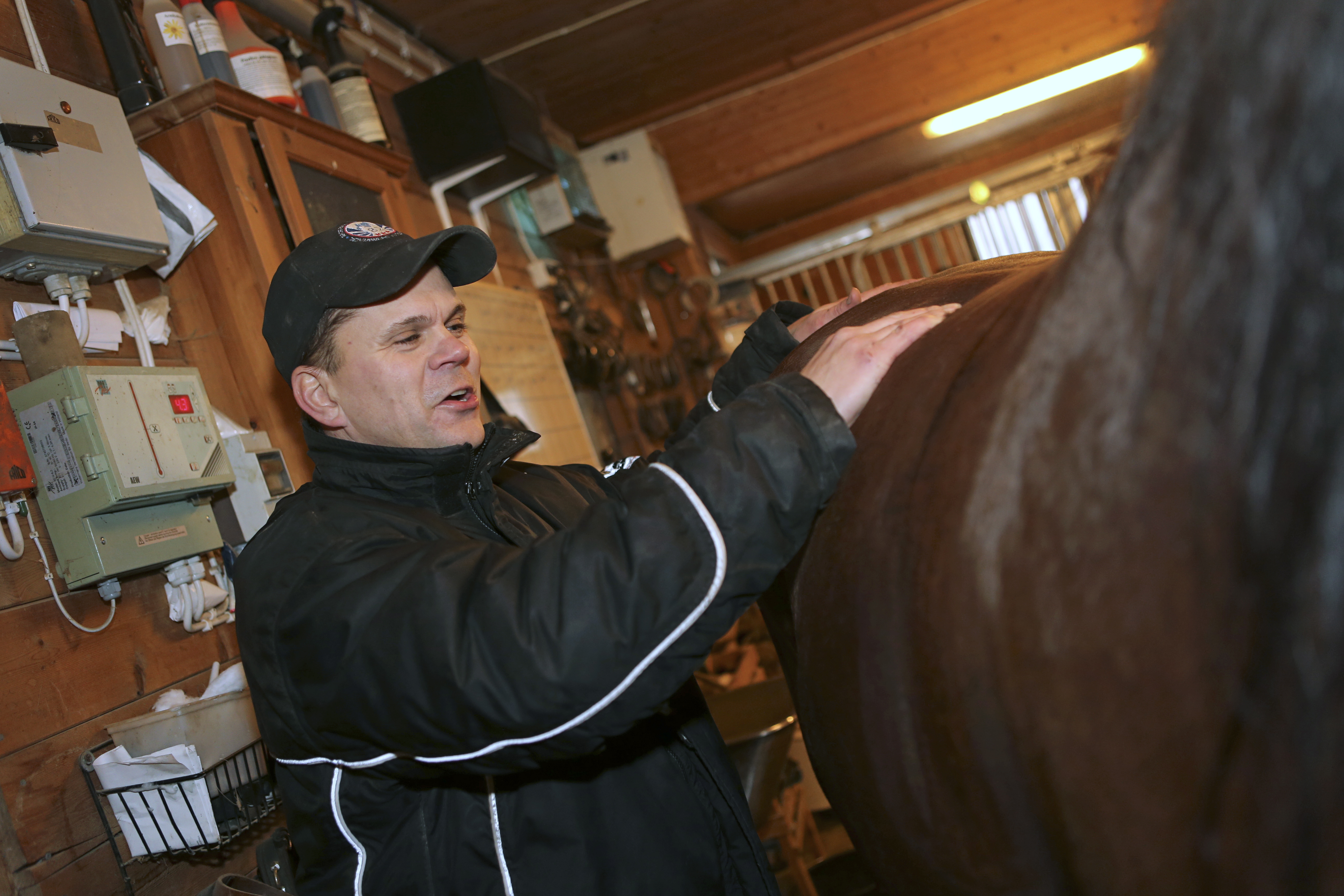 He's known as an amateur trainer with extremely high winning percentage.
Since the first of the year Magnus Träff is a professional trainer.
"It's always been a dream for me to train horses professionally. Now I just need to find a farm to be stabled at" says the 48 year old from Järvsö who is racing Sugar Daddy on this Wednesday's V86®.

A small stable filled with winning machines.
That has been Magnus Träff's trademark.
Since 2015 he has made 263 starts and won 69 of them, which means a winning percentage of 26.2.
Compared to the top 30 most winning trainers in Sweden in 2018 he's only beat by Timo Nurmos.
And these are the trainers we have to compare Magnus Träff to since he as of January 1st is a professional trainer.
"It's been a dream for a long time to be able to take this step. Considering it's been going so well these last couple of years, it felt like it's now or never" says Magnus Träff who still kept his regular job.
"Yes my main job has been to run a rehab center. I still do but my I hope to let go of that during this year".
What type of rehab center is it?
"For kids and youths who have had problems in their lives. It's a business I owe myself".
What will happen with the kids?
"I don't want to shut it down, I want to sell it. Hopefully it will be run by the staff".

No joint treatments
Also when it comes to his four legged friends, Magnus Träff has focused on individuals with a troublesome past. All eight horses in his stable have in common that they arrived to his stable more or less injured. They're also all geldings. Most of them were bred by Menhammar stuteri and previously owned by Travkompaniet.
"Many of them were still studs when they arrived but since they were unsuccessful in their youth due to various injuries their chances of becoming stallions were eliminated. I've learned that they stay sound much better as geldings, so we've chosen to do that. I definitely wouldn't mind training fillies or colts".
What's your secret getting these injured horses back to the races?
"I think the main reason is that we give them a lot of time. We're four people here including my dad, my brother and my girlfriend. That means we can spend a lot of time on the horses and when we jog and train them, we're out for a long time with each horse".
The veterinarian must be important too?
"I don't use a veterinarian very often, but I use chiropractors and other alternative treatments more. That's something I took with me from my own career. When you find out that a horse is lame in an ankle and you inject that ankle. I never had one single joint injected during my own career, so why should I inject my horses? Many times you have to find the problem causing the lameness. Just like Utopi, the horse racing on Wednesday. He had a mysterious lameness in the left knee. We found that the problem came from the right knee and when we fixed that he became much better. He's never felt better in training".
How come you've done so well with horses from Menhammar?
"We've gotten a a lot of faith from Travkompaniet, inquiries about taking horses who got injured. It's a great chance that we're very grateful for. The deal is that we carry the entire cost and they retrieve 20 percent of the earnings. It's great getting a horse from them. You know the breeding is very thought out and that they've gotten the best start by the breeder and were picked out by a big trainer, in this case it's often Stefan Hultman".
"Then you know that the talent is there, if we can just manage the issue they'll be alright and will make money for us".

Small barns and few horses per caretaker
One detail is still missing until Magnus Träff can start his professional career the way he wants to.
A new training center.
That's the main focus right now. The farm we're at now only has eight stalls. If someone would call and want to leave horses in training I can get a few stalls in a nearby building, but the plan is to find a new farm as soon as possible. And preferably nearby so the kids don't have to switch schools".
That doesn't sound so easy, how many possible objects have you found?
"There are lots of nice farms around here that could be transformed into beautiful training facilities with some love and creativity. It doesn't bother me if they haven't had horses trained there before. I want to build it the way I want it anyway so we can keep this small scale that we have now".
Small scale, how?
"That the barns are small. It's a big factor to keep sickness out, but more so to keep a quiet and stress free environment. I'm thinking six stalls in each barn, that creates a different harmony".
How big of an operation do you plan on having?
"I'm thinking around 25-30 horses. We can't go any bigger if we want to keep the same concept we have now".
If you want to spend that much time on each horse, wouldn't you need to hire many caretakers?
"Yes, I don't want more than six horses per caretaker. If not we wouldn't be able to train them the way we do now".
You would have to charge a pretty high rate for that to be possible?
"It will probably be high compared to other trainers in this area. That's where my prestige comes in to play, but I am not willing to change my concept just because I'm a professional trainer".
Have you had many inquiries from new owners since you became a professional trainer?
"No. One owner called right after new years but I couldn't take the horse at the time. But once we've found a new farm I hope people will show interest in my services".

"The break did him good"
According to travfakta.se you have the highest winning percentage (36%) when it comes to horses who haven't raced for 30 days or more, just like 9 Sugar Daddy (V86®-3). Is he ready to win right away?
"I hope so. He was just bad in his last start and has gotten treated since then. Our horses are usually good right off a break and the same goes for him. He has trained slowly at the track once, but other than that we've just trained here at home and the last month he's been very good. He hasn't felt this sharp in a long time, so the break really did him good".
What do you think of his chances?
"First of all I hope the track won't be too hard, since it will be a disadvantage for him racing with corks in his front shoes. If he doesn't have to do that, I think he'll have a chance to win. A lot will be determined in the start, if he's too far back it will be tough to win, but if he can find a good position from the second tier he should be right there. He used to be best on the front end, but nowadays I think he's just as good from behind. We'll race him in an American sulky and a blind bridle as usual".
What are the goals for Magnus Träff's first year as a professional trainer?
"To find a farm and build a business where horses, staff and owners will love it. Get harmony and a kickoff for the years to follow".
And keep on winning more than every fourth start..?
"Yes. we'll fight for that. The winning percentage in itself isn't that important but it's a proof of us knowing our horses are ready to go when we race them".