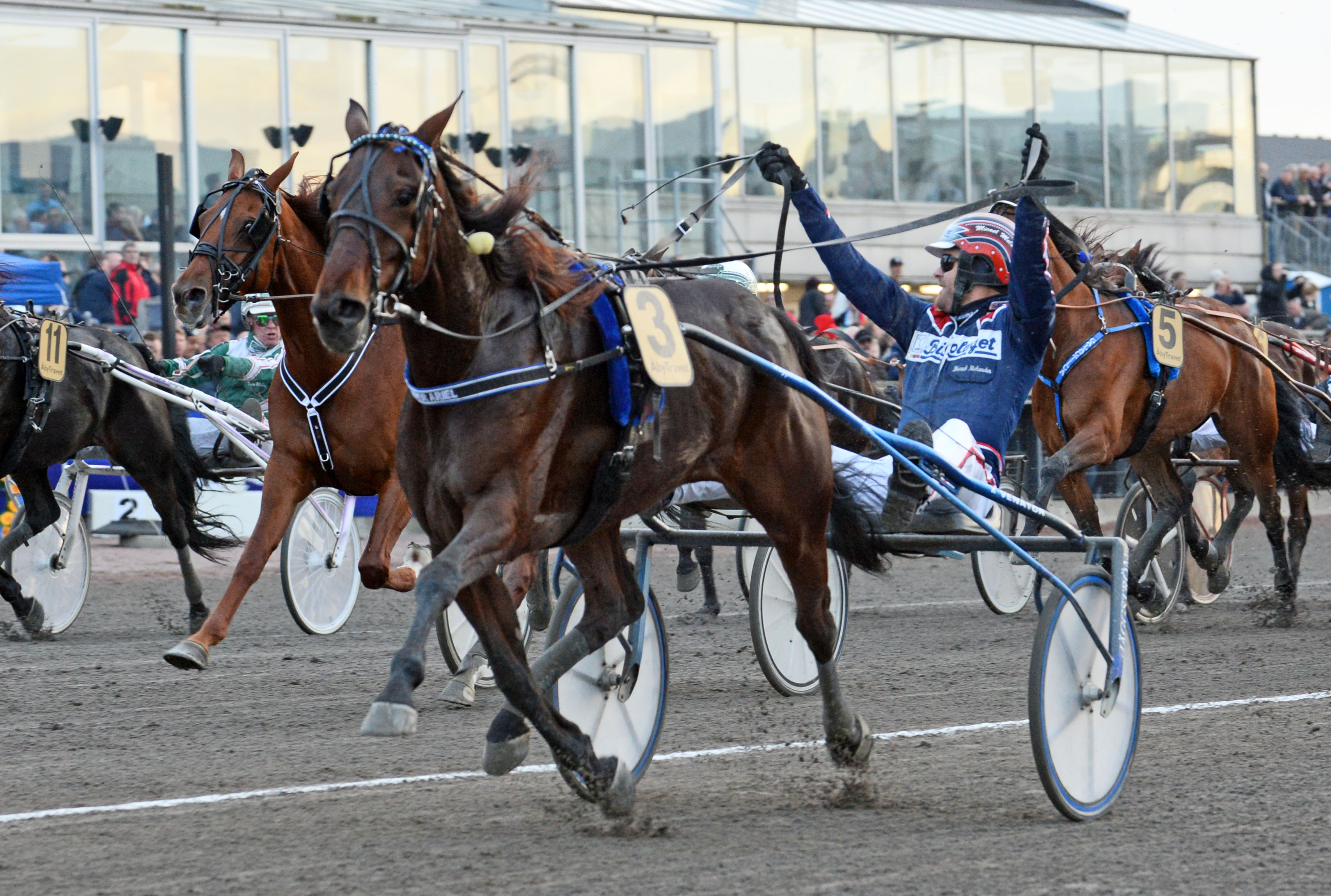 The reigning Swedish champion mare is back.
Kennet Häggström’s Super Ariel is making her first start of the year on Wednesday and she is the only mare against the boys in Gösta Bergengren’s Minneslopp.
“She’s been training all winter and feels good but this race came up a little tough for her, but my horse is pretty good too” says the trainer about her V86® start at Bergsåker on Wednesday.

Super Ariel (V86®-8) has won several big races in France and in 2015 she won Diamantstoet at the Elitlopp weekend at Solvalla. The biggest win of her career came in October last year when she with an impressive finish beat all her opponents to win the national mares’ championship and SEK 500,000.
“It was so huge, my head was just spinning and I can barely remember it. It was unbelievable” says trainer Kennet Häggström who is also the breeder and owner of the mare.
The Solänget licensed trainer had a lot of success last year. One reason was the cold blood mare Lisa Molly’s six wins with the highlight being the win in Norrlands Stoelit. It was a record breaking year and at the home track’s horse of the year party the stable was recognized for it’s success.
“Last year was fantastic. Almost every horse delivered. Lisa got the award for older cold blood of the year and Super Ariel for older warm blood of the year. And I was the trainer of the year. Three out of three” says Kennet Häggström.

Was turned out before winning the championship last year
Super Ariel has 17 wins and just as many second place and third place finishes. She has earning of SEK 3.8 millions. It’s very rare to her underperform.
“She has raced well the entire time. It’s very rare for her to race badly. I raced her at Bergsåker right after she won the championship but then she had a cold and was coughing after the race. She finished fourth but she wasn’t herself” says Kennet Häggström who after that gave his mare some time away from the races.
“She wasn’t turned out, she has actually trained the entire time since her last start. I’ve trained her two, three faster trips lately and she feels good”.
Six months after her last start Super Ariel is finally ready to hit the racetrack again on Wednesday.
“She’s usually good in her first start of the year or after a longer break. Before the mare’s championships she had been turned out for a month. We just brought her in and trained her for two, three weeks.

“Twenty meters better barefoot”
Even though Super Ariel has beaten good horses before, this is a really tough field she faces in her first start of 2018. Makethemark, Digital Ink, Cruzado dela Noche just to name a few.
“I think it will be tough. The horses who have raced already are a little tougher, so it will be hard to win. If she makes money and races well, then I’m happy. When she races against just mares she’s very good but it’s tougher against the boys” says Kennet Häggström and continues:
“It would be good if she could find second or third over and just sit there, then she can finish very well. If they set a high pace upfront that might get them tired and we can catch them in the end”.
The tactics from post five is ultimately up to Micael Melander who will drive the mare again. Equipment and shoeing will also stay the same as usual.
“She will race in an American sulky, with an open eye bridle and she will go barefoot. I’ve been training her with heavy steel shoes, so it will be perfect to pull them now. She’s almost twenty meters better barefoot” says the trainer who says the goal this year is to defend the championship from last year.

Editor’s note: Starting this Wednesday V86 will be raced on one track, instead of two, and post time is 19.20.