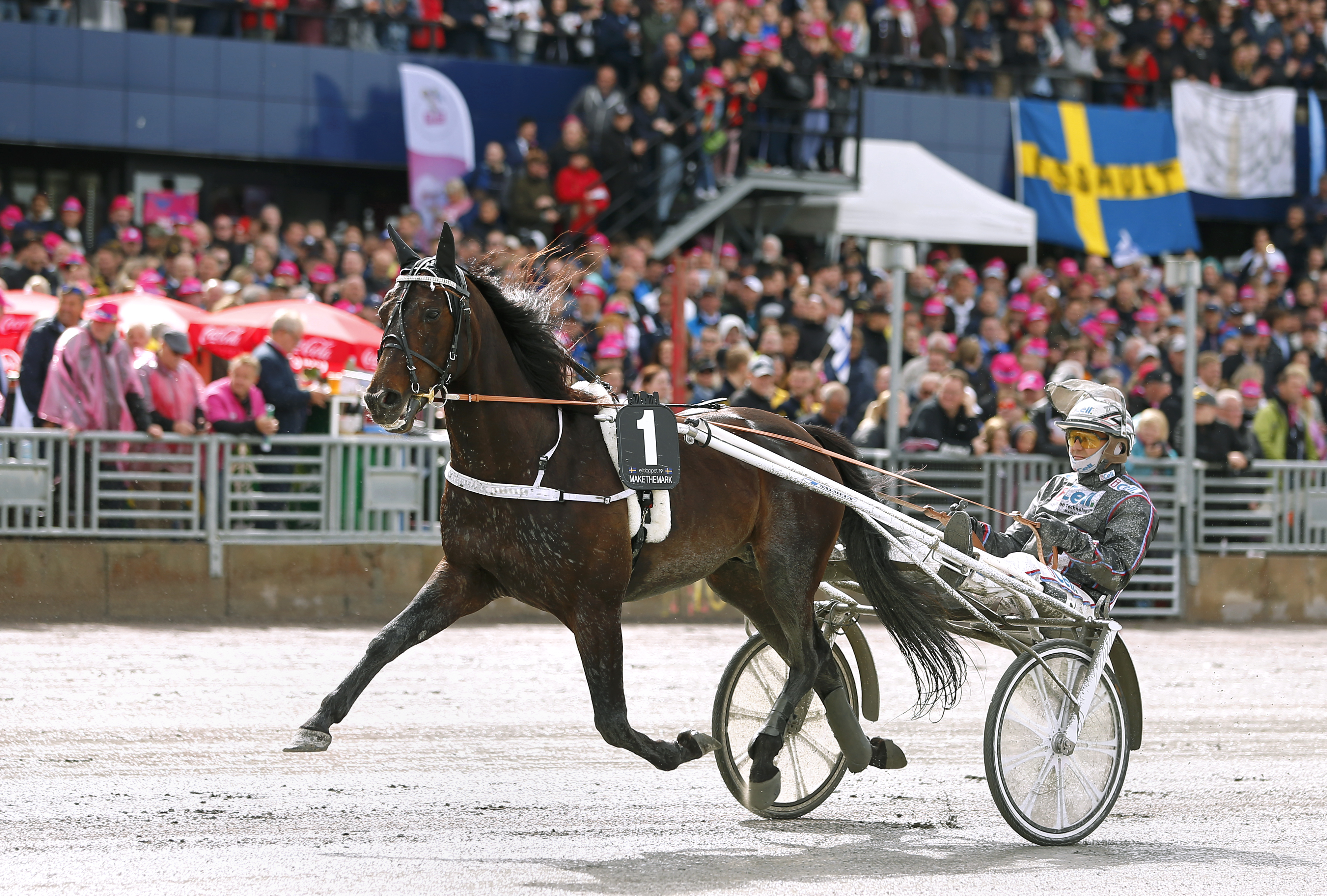 Makethemark has been in the top of his crop every year and has made almost SEK 11.5 million. The seven year old trotter is now returning after a layoff.
"It will be exciting, of course. I will be in Sundsvall to see him race" says the Boden licensed trainer Petri Salmela, who has horses racing at both Bergsåker and Solvalla, the tracks who are co-hosting V86® this Wednesday.

The most interesting horse from the Salmela stable is of course the star 9 Makethemark in V86-7 who returns after a 2 months long layoff.
Makethemark won convincingly in his first start of the year at Solvalla back in March, but after that the season hasn't gone the way the connections had hoped.
"It already started in his second start of the year, in a V75® race at Romme. He was barefoot and it started pouring down which made the track rock hard and he got very foot sore".
After that Makethemark tried his luck in both Copenhagen Cup and Elitloppet. He finished fifth in Denmark and he missed making the final of Elitloppet despite trotting 1:10.0 over the mile.
In the start following Elitloppet he finished second to Antonio Tabac in Norrbottens Stora Pris. He then went on to race twice in Finland, where he made a break in Kouvola and finished third in Mikkeli in 1:09.3 over the mile. He followed that up with two non successful starts in Sweden in August, first he finished outside the money in Åby Stora Pris and after that he made a break in The Owners Trophy at Solvalla.

Sharp in training at Solvalla
"Something was obviously bothering him, but we have gone over him from top to toe and treated him three times. We have also x-rayed him but we only found some minor wear and tear on him. Other than that we haven't found anything wrong and he feels good in training" says Salmela.
Two weeks ago, the Boden licensed trainer - who also has a stable at Söderby Gård, north of Stockholm - took his star trotter to Solvalla to train.
"He trotted 1:14/2,000 meters and felt good".
This Wednesday the seven year old son of Maharajah comes out in an open trot at Bergsåker and in the sulky is Ulf Ohlsson as usual (Ulf has driven Makethemark in 57 out of 64 lifetime starts).
"I never give Ulf any driving instructions, he drives based on how the horse feels. He is in agaisnt a couple of tough horses but he should have a chance despite making his first start back after the layoff. He will race with shoes this time".
Have you looked at any future races for Makethemark?
"No. We will make this start and see how he comes out of it" says Salmela, who has two more starters on V86.
"4 Hazelnut Sisu (V86-1) is a nice three year old filly who hasn't been able to compete with the best fillies so far this year. She is also returning after some time off and she has trained on the sand track where she has looked good. I have also trained her at Solvalla in 1:18/2,000 meters. We will try to pull her shoes off and hopefully that will give her an extra gear. She is just OK out of the gate and I hope she can finish top three".
"7 Kaptah (V86-2) is racing in an amateur race and gets an experienced driver, which is important in these races. Kaptah was scratched in the V75 final when he came up swollen in a leg, but he raced at Gävle last Tuesday where he finished second on the front end and he raced well. That start will do him good and racing back to back weeks shouldn't be a problem. The long distance feels like an advantage for him and he should have a decent chance to win. He can not go barefoot all around this time, so we will race him with shoes behind".