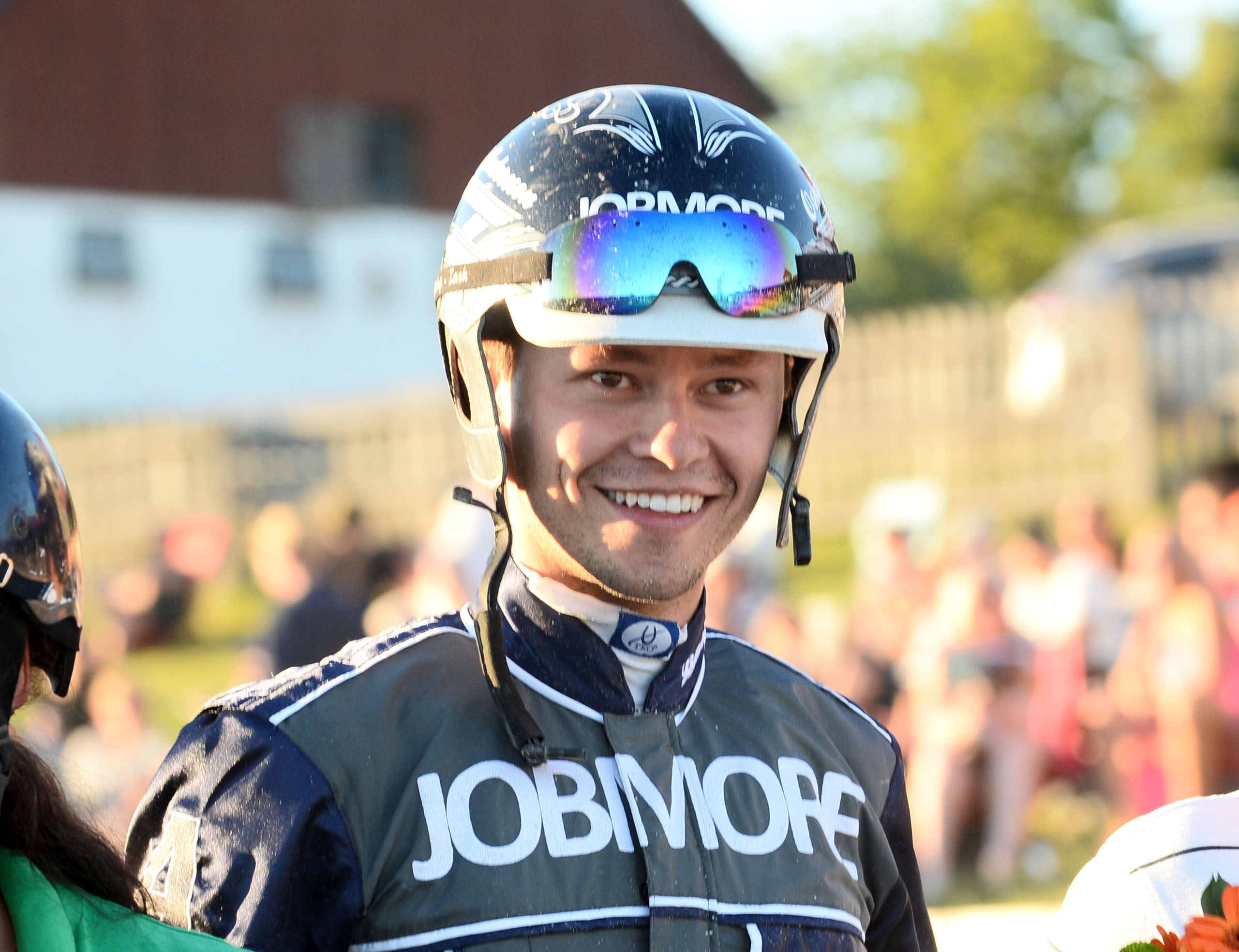 V86®: Starting his own stable after record breaking year

Last week he took driving win number 300.
Next year he will start his own stable.
Things are moving along well for stable lad driver Oskar J Andersson who will drive a horse in good form on this Wedensday's V86®.

Oskar J Andersson, 26 is going towards his best year so far as a driver. With 64 wins and over SEK 7 million in earnings he's by far the most winning stable lad driver in both categories in the country.
"It's been a fantastic year. I've opted to drive more this year and it has really paid out. I've started working with some new clients and developed the relationships I had with old ones. I feel it's important to work together with the trainers I drive for. It's not just that one particular race, you need to develop together to be able to reach more success" says Oskar J Andersson.
Since getting his driver's license in 2008 he's now at 300 wins, a number he reached when winning with Ma Running at Gävle last Thursday. Same night Oskar's employer Jörgen Westholm surpassed his record in earnings for one season (SEK 13.5 million).
"We haven't had a chance to celebrate yet but since I took my 300th win on the same night we reached an all time high for the stable, we'll celebrate with the entire team next week".

His own stable next spring
Last winter Oskar J Andersson took the last class to become a professional trainer and the time has come to open up his own stable and be his own boss in the springtime.
"Me and my girlfriend Paula are planning on starting our business next spring. I've had very good years and learned a lot working for Jörgen and I hope and believe we will continue having a good relationship also in the future, but I've always dreamt of having my own stable and now the time has come. We will train on my parents' farm 40 kilometers north of Västerås where they currently have 40 stalls for us".

"She's been fantastic"
But Oskar J Andersson is still a part of team Westholm and on Wednesday they are racing four horses on Solvalla's V86®. Andersson will drive Amalia Cash (V86-8) who was very impressive in her last start when she from fifth over trotted the last kilometer three wide to win. Since she will start from post 14 in the third tier behind the gate another extraordinary effort might be needed.
"Amalia Cash has been fantastic lately and especially in her last start. She's been up and down before and been hard to figure out but it feels like we've gotten there now. Sure we've been optimistic and she hasn't delivered sometimes, as on V75® at Hagmyren, but now she's been good two starts in a row and we believe she will come up with another good effort here. Her post position means that we will be left out to the pace and who we'll get to follow and such but if her form is intact and we have a little bit of racing luck we could absolutely get there again".
Also in that race is stable mate Mellby Fashion from post five.
"She's very quick out of the gate and likes the front end so the plan is to get there. Considering the post positions, I'd say she and Amalia have equally good chances of winning.

"Decent shot"
Here are Oskar's comments on team Westholm's remaining V86 starters:
"Hossiana Boko (V86-2) is in better form than what the program tells you. She got a tough trip in her last start and hung in well. Before that she was locked in a couple of starts. She can leave pretty well and from post seven she has to try to get out of there. If she can get to the front or find a good position she should have a chance".
"Ninepoints Lover (V86-4) has been late to get going but has raced ok. He's a pretty capable horses so we think he'll have a good year next year as a four year old. He finished strong in his last start where the finished fast and hopefully he'll sit a couple notches closer to the front this time, if he doesn't reach the front himself. He left pretty well out of the gate last time and should have learned from that. If he gets the front he well be raced on the front and even if he doesn't he should have a decent shot to win. He might race with pullouts for the first time".