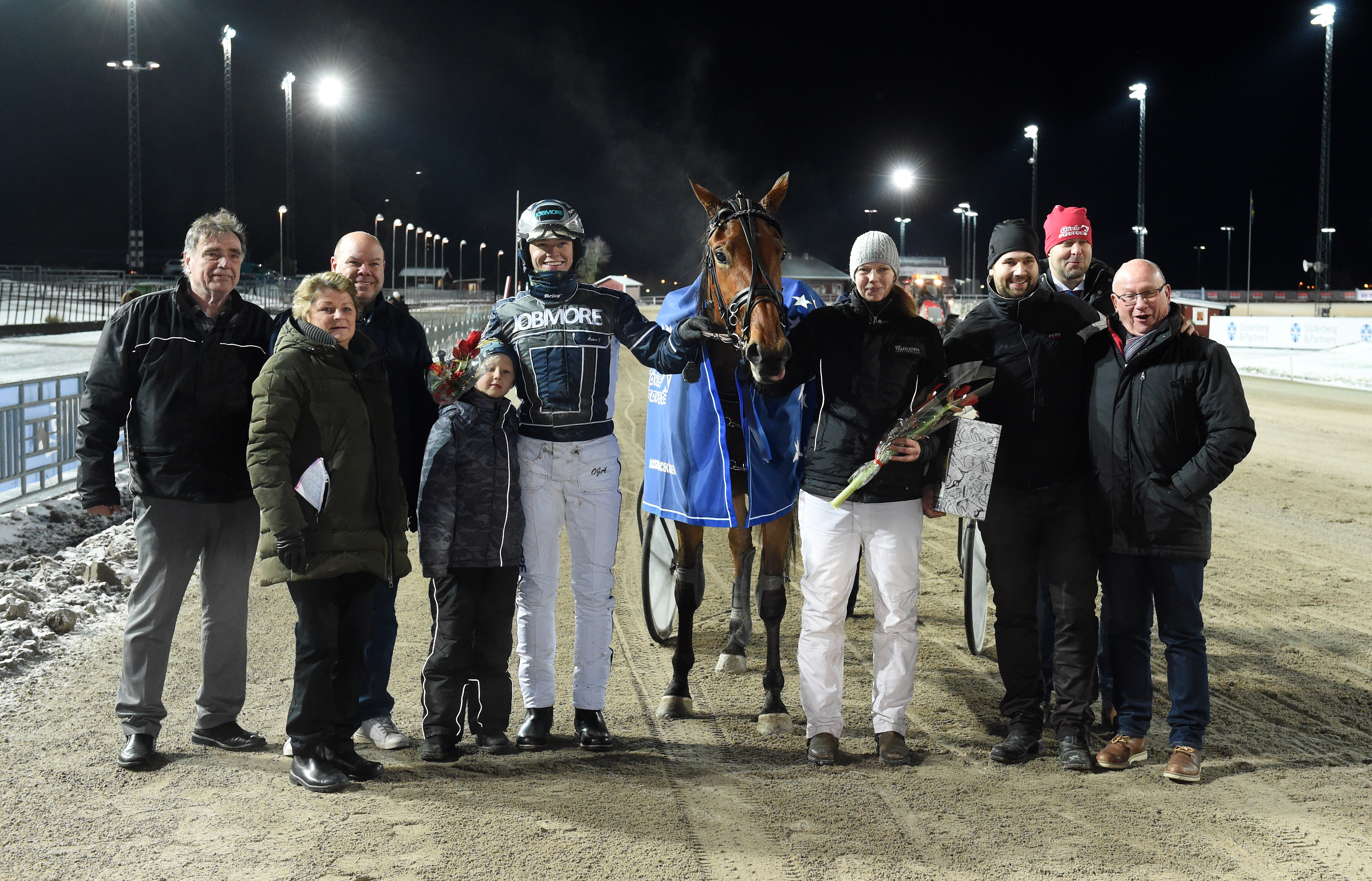 One of the country's best three year old fillies came to her training late last year.
With Sunwapta Goj there's never been any doubt for amateur trainer Malin A Karlsson from Axvall.
"She was in great shape when we she arrived to us and of course we'd love to race in Stochampionatet. If she just gets out of the V86® race well on Wednesday then we're one step closer"

Örebro is co-hosting V86® this Wednesday together with Åby, when Solvalla is getting ready for their big Elitlopp weekend.
Amateur trainer Malin A Karlsson trains seven horses on a farm a bit from Skara and does it full time with some help from boyfriend Anton Johansson. This Wednesday the couple are heading to Örebro with two horses and one of them, Sunwapta Goj is a horse who is getting mentioned when there are discussions about the home track's biggest race this summer.
To get the chance with a horse of Sunwapta Goj's caliber was of course huge for the couple from Axvall. Owner Lennart Bengtsson contacted Malin and Anton and let them pick out a horse. They landed on Visby trainer Sten O Jansson's promising filly Sunwapta Goj who was for sale.
"Lennart is not from around here, he lives in the very South of Sweden. He wants more debt in the sport for smaller trainers and to get more of us "smaller ones" the chance to own and train a nice horse. His only demand was that it had to be a female and we picked Sunwapta. Lennart owns her we are leasing her from him" says Malin A Karlsson who has a past as a groom for Ulf Stenströmer among others.

Were looking for a nice and easy horse
Malin's boyfriend Anton Johansson does not work with the horses but helps out after work. With Sunwapta Goj is was straight ahead and she raced six weeks after arriving from the couple Sten O and Ingela Jansson.
"She started off with a V86 victory at Åby. She then followed up by winning E3-revanchen for three year old fillies at Gävle and in the first start of this year in April she won the first test of Stochampionatet at home at Axevalla.
"We have taken good care of her I would say, even if she already was in great shape when we got her. The fact that she won the first two starts for us is more credit to Sten O Jansson's than to mine. We were mostly looking for a nice and easy horse to be around since I work so much on my own with the horses. The fact that we found someone as good as Sunwapta is a great bonus" says Malin and laughs.

Sunwapta Goj had to leave hard to get to the lead in her last start at Solvalla, got tired and finished outside the money. What are your thoughts on Wednesday's start in this leg of Diamantstoet at Örebro?
"She stopped in a few strides at Solvalla and that's not her. She was pulling during the race and a horse that isn't used to doing that can get a lot of amino acids. I think that's what made her stop like that. We had her checked up and found nothing wrong with her. She's been eating well and seems to have come out of the race well but it's still a little nervous. It's a plus with that many horses behind the gate and her all the way in the back. Oskar (driver Oskar J Andersson) says he thinks she's better from behind so here's his chance to prove that.

So far she is home track Axevalla's biggest hope for Stochampionatet this summer. Your thoughts on that?
"It's all good fun. If everything is good on Wednesday we know where to go next, the second test early June. Therefor this is not her most important race, it's more of a race to get her there. Oskar will try to give her the best trip possible and hope for a good finish and that she can do it from behind this time".

Enjoy The Life (V86-4) won in a good way at Åmål in his last start. Maybe he's your best chance to win on Wednesday?
"That's possible, considering their post positions. He didn't have to empty last time and didn't get any amino acid so that makes it possible for us to race him already now. Mikael J Andersson didn't push him in the start, he just tried to keep him quiet and just moved him to the front slowly. I hope Oskar can do the same thing now. He's a capable horses and he's more quiet at home now. From what he's shown in his last two starts, he's also more quiet on the racetrack. It's a good thing. It's all in his head. When he wants to leave on his own he usually doesn't get too hot" says Malin A Karlsson.