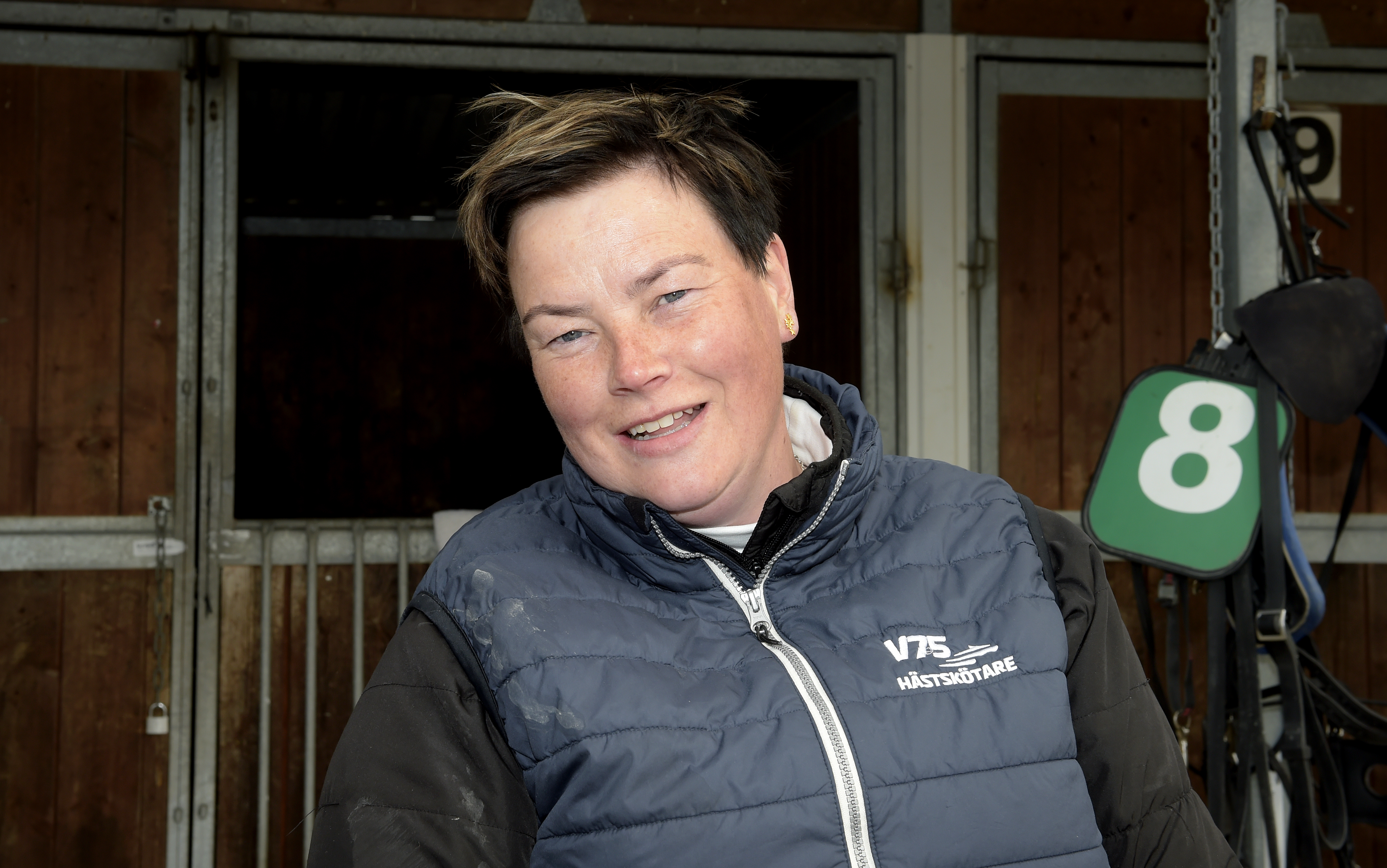 On Monday V86 Super Days restarts.
Someone who comes fully charged is Ulrika Wällsetdt.
"Two of my horses set new personal records in their most recent starts and the third one trains better than ever" say the previous super groom for the Stefan Hultman stable.

After the weekend's V75 it’s once again time for V86 Super Days.
The Monday stops will be at Halmstad and Romme and it's the latter track that will get a visit from Ulrika Wällstedt.

The fact that your three horses were put in consecutive races might make for a stressful night?
"I can't remember ever racing in three consecutive races since I became a trainer. As a groom it happened many times. I remember one year at the Sprint Championship when all five horses I took care of raced on the same night. On top of that, both Jaded and Jocose made it to the final, so that was a busy night".
Do you remember the final?
"Do I ever...! I don't think I've ever been so annoyed after a race. Jocose got pressured hard in the lead by Smooth Moves - who did not finish the race - and lost right at the wire to Fantasy Broline. I wasn't happy then..."
"I also remember that Erik Adielsson was asked a few years later which was his worst drive ever and he said it was the final of the Sprint Championship with Smooth Moves, so I felt good hearing that".
So racing in three consecutive races won't stress you out?
"No, if there's something I'm really good at, it's logistics. So I can handle that".

"Due for a win"
Wällstedt hopes to be happier after the races on Monday and it sounds very good on all three horses.
First to start is 9 Fonda Boko (V86-2) who has finished well from terrible post positions most of the summer, but who 'only' finished fifth in V75 in his last start.
"At first I was disappointed right after the race. Disappointed that he couldn't do better with such a good trip. But when I looked at the result and saw that he had trotted 1:09.2 speed the last 800 meters in the two path and set a new record over the middle distance, then I couldn't be disappointed. Maybe he wasn't 100 percent that day, but it was still a good effort".

Will he be 100 percent on Monday?
"I think so. He has felt good after the race and he has raced well all summer, without getting the results. Earlier he was afraid of the stonedust getting in his face and he raced best in the lead but now he is best when he doesn't have to leave and can come from behind. He only has one move and starting behind a quick leaver looks perfect. Plus I think he's a touch better on the short distance, so it looks interesting".

It doesn't look like he will be bet much, do you think he can upset?
"Yes, if things go his way I think that he can win. He's been due for a win for a while now and I strongly advice the bettors to use him on their ticket if they're looking for big money".

Any equipment changes?
"No, he races with Duplo shoes upfront and they are quite heavy and mostly used as training shoes but he has become much safer with them on. He will race in the same sulky and with an open bridle again, he does what he can in the finish so he doesn't need the pull down bridle anymore".

"A bid for top three"
5 Jilla May (V86-4) has four second places this year but no wins.
"She's a decent horse under development. I think she's pretty good, she has a good attitude and she does her best every time. She was good in her last start when she set a new personal record and she has looked good after that. She can leave pretty well, but she can get pacy into the first turn so I don't want her leaving for lead, but for a good position".

Are you making any chances on her that could get her to put her nose first on the line?
"No, I don't want her getting too hot so she will race open with one can't see back roll just like she has done lately and with same shoeing and sulky. She gets better with each start and she could be a bid for top three at least".

Hoping for the lead
Ulrika sounds the most optimistic when we talk about 7 Untilwemeetagain (V86-6) who in his most recent start tried monté for the first time and finihed second.
"We were very pleased with him. He had only been under saddle once before the race and he behaved perfectly. He's a big, heavy horse who got going late because of injuries when he was two and three years old and I think he's still under development despte his age".

How did he come out of the monté start?
"Very well. He has felt very good after that, happy and alert. Actually better than he has ever felt"

Can he take advantage of his good post position?
"I hope so. He can leave OK in volt start and I would love to see him in the lead, he is best when he can set his own pace".

He hasn't raced in the lead since 2018...
"I don't even remember that. But it would be very interesting if he could get there once. In that case it wouldn't surprise me if he wins".

Any equipment changes on him?
"Yes, we will try him with a pull down bridle for the first time. He has raced with an open eye blind bridle before. We haven't tried it in training, we're waiting until the race and hope that it will have a nice effect on him" says Ulrika Wällstedt.

Do you think you will have happier memories from this Wednesday than from that Sprint Championship Thursday?
"Well, I have good memories from that night too. Finishing second isn't that bad and it was a nice evening after all. But now I'm a bit excited about this, since my horses all feel so good".