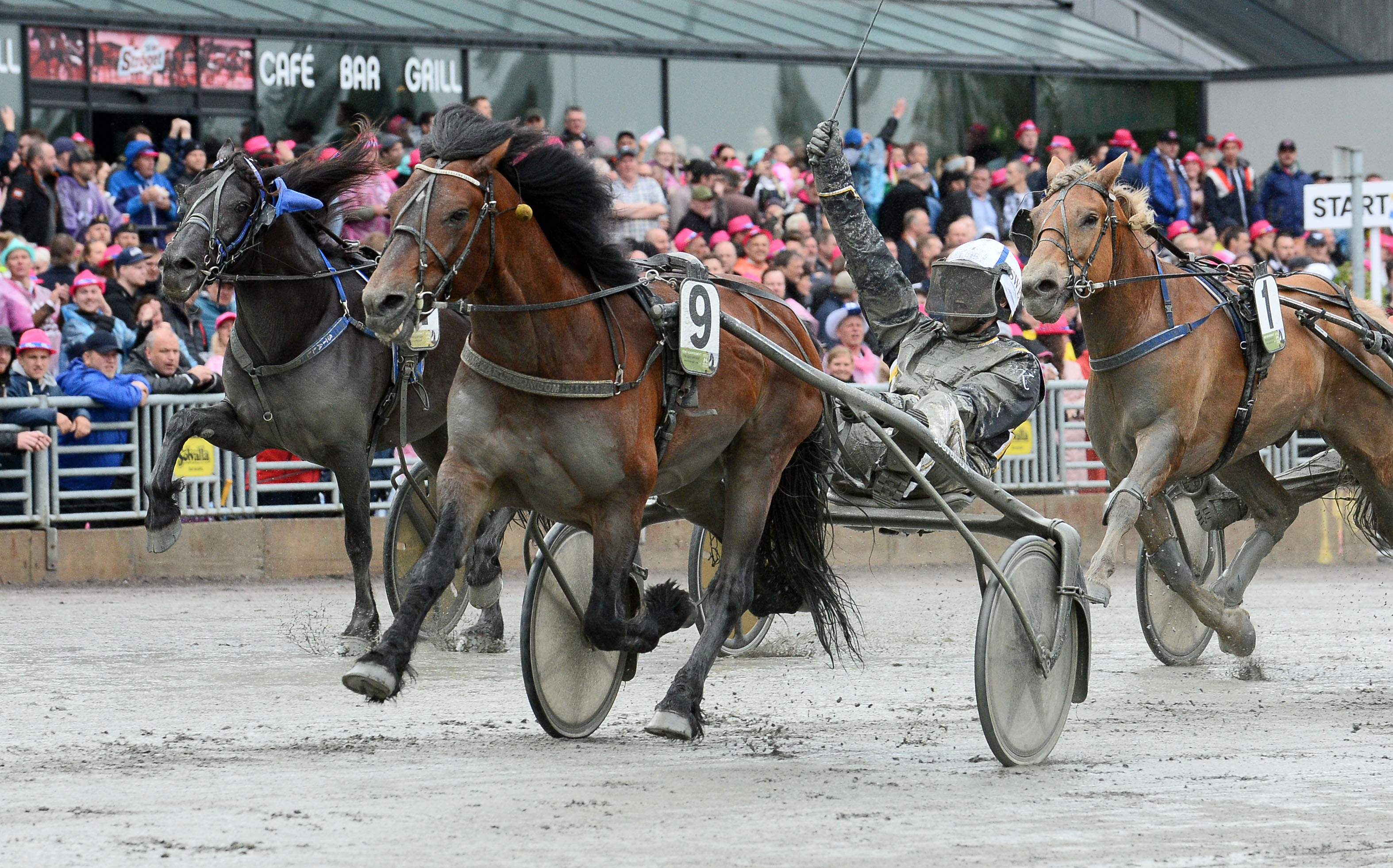 The kings are back.
The season will start on Wednesday for Tangen Haap and Björn Karlsson.
The reigning Elitkampen champions.
"That victory changed my life" says the coldblood expert.

At a rain drenched Solvalla last Sunday of May Björn Karlsson got to experience something he had dreamt about since he was a little boy.
After a dreamy trip along the pylons at a very tough pace Tangen Haap sprinted past the entire Nordic coldblood elite to surprise win Elitkampen.
Karlsson screamed in joy as he crossed the finish line and was visibly touched as he was interviewed after the race.
"That must be the only time I have ever been speechless. But that was the dream of my life coming true right there. Elitkampen is the one race I always wanted to win. Zzz That's when all the big guns come out and there are many people who have had better horses than Tangen Haap and never won it" says Karlsson and remembers:
"It was a strange feeling the entire day. I'm usually moody and cranky before the race but that day I just thought it was fun. The best feeling wasn't from the race itself, it was actually when I scored him down. I hadn't raced him barefoot in a year and when I turned and asked him to go in front of the crowd I felt that kick in his stride. Then everything went our way in the race. It was all a bit surreal".
How often do you think back at the race?
"The way the weather has been this winter I've thought about it pretty much every day. Definitely every time I sit behind Tangen Haap. There's a completely different feeling now when I train him or warm him up, after that victory. He's like Jesus to me now. Someone who has given so incredibly much".
How has the Elitkampen victory affected you as a human being?
"That victory changed my life. I am more confident in the work that I do. The stress everyone feels when they go racing is gone. If a race goes badly, I don't dwell on it as much now. I know we achieved what we aimed for, that makes you feel better as a human being".
"I also think it gives me more respect. Both on and off the track. I remember when I was on my way out to a race in Östersund in January and Ulf Ohlsson said: 'So you're in the race, then I know I can't win'. If I'm in the lead they won't come at me like they used to. I might imagine some if but that's the feeling I have" says Björn Karlsson.

Can't wait to go to Finland
Last time Tangen Haap was seen on a racetrack was in November.
On Wednesday he kicks off his 2020 season in a sprint race at Bergsåker.
That will happen on a V86® card infused by a jackpot where a sole winner with all eight winners picked could take home SEK 14 million.
A 2020 season that has two big goals.
"Of course we will do all we can to defend the victory in Elitkampen. Therefor I will save his feet for Solvalla, just like last year. I also want revenge badly in Nordic King in Härnä during the midsummer weekend. It was a magical experience to come there last year; a brand new arena with standards we don't have in Sweden, located together with a hotel village and a funfair in the middle of the forest. Everyone was so hospitable and the crowd was wonderful. I can't wait go back there this year".

Extra hungry after a layoff
But even if Karlsson saves the barefoot card for later, the Wednesday start is not just a stepping stone towards bigger races.
"He started the winter by spending a month at the Alebäck breeding farm. It was the first time he got to breed and he really seemed to enjoy it. He came home early December and he's felt good the entire time. He the laziest horse in the world to train, he can stop in the middle of a heat just smell a pile of poop, but the good thing is that he doesn't require as much training now as he did when he was younger. When I trained him last Friday I yelled at him to get him to go so I could see where he stands and he just accelerated up the entire hill. It was a great feeling and it gave me the exact answer I wanted. Being that we have trained on ice the entire winter he might lack some speed in his legs, but mentally he's usually very hungry to race and he usually races well after a layoff. He won a similar race at Bergsåker in his first start of 2017 and I can assure you that he's a much better horse now. But also, these are tougher horses he's in against now".

Thinks he will win and puts out a warning for a surprise
How do you look at the race this time?
"I have to leave with him and try to convince Oskar (Kylin Blom) that Art Kjarvald is best with cover so he will let us go. Would he not, I will probably try to get down behind him, but if I can't I'm not that worried sitting on the outside since I'm pretty sure Tand Kraft will come early to give me cover. Then we have to see if he can hold off Ängsborken and Tekno Eld, who are two huge talents and they will be among the best for many years".
It sounds like you have done your homework for this race very well...
"Yes, of course. That's the advantage I have compared to the top drivers. When I only drive two races a week, I have to take advantage of that and do my homework very well".
How would you rank the top four horses in this race?
1. Tangen Haap
2. Tekno Eld
3. Ängsborken
4. Art Kjarvald
So you think you will win?
"Yes after training him last Friday I do think so. But Tekno Eld will be tough, both on Wednesday and also the entire year. He looked very good last year and in his last start in Norway and I know (Jan-Olov) Persson has been able to train him harder this winter. So if you don't think we will win, you have to look out for him" says Björn Karlsson.