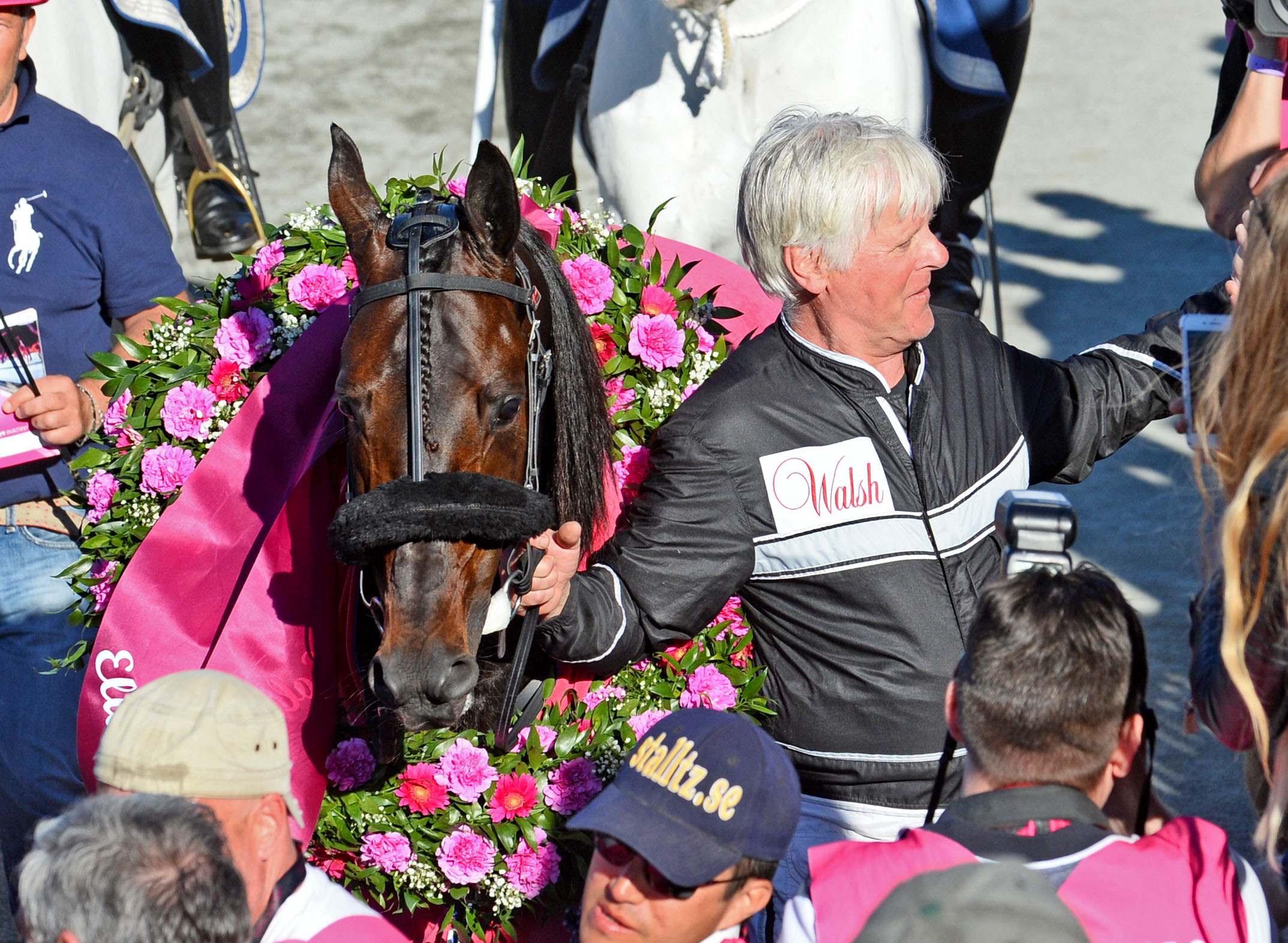 V86®: The Elitlopp champion is back

On Wednesday Ringostarr Treb will return to Solvalla in his first start since that magical Sunday in May.
"Every time I train him I think of that victory parade after Elitloppet. It's fantastic to have a horse like this" says Jerry Riordan.

Four months have gone by since Jerry Riordan had the biggest moment of his life on a racetrack. Ringostarr Treb had stood up against Propulsion and the rest of the Elitlopp finalists and the 60 year old American native could walk down the Solvalla stretch as winner of the finest trotting race we have in this country.
"It's something I've dreamt of since I was here for the first time in 1980. It was even better than I could imagine. He's such a cool horse and we walked along the fence the entire way back. There was so much people around him, it felt like walking through a tunnel. Everyone wanted to pet him and there was this lady in a wheelchair, she just pulled him towards herself and the horse just loved it. Myself, I got to walk around joking with everyone, it was an unforgettable moment" says Jerry Riordan who as a groom got to travel to Elitloppet with Chiola Hanover 38 years ago - first time he ever left the United States.
"And first time I ever flew. I remember how impressed I was by the horses over here, I thought it would be impossible for an American horse to win Elitloppet. But we did it just eight years later" says Riordan who worked as assistant trainer for Chuck Sylvester - trainer of Mack Lobell, one of the most memorable Elitlopp winners.

USA next
After many years in Italy, Riordan moved to Sweden and Halmstad racetrack in 2014. Since then he's improved his results every year and been a steady participant in the biggest races. Last year his stable made SEK 20 million which got him nominated to 'trainer of the year'.
To be able to beat those numbers this year, he needs a win in the International Trot at Yonkers in his native USA on October 13.
A race that Riordan won last year with Twister Bi, who has left the Riordan stable.
Instead it's Elitlopp champion Ringostarr Treb who will make the trip across the pond to compete for the first prize of $500,000.
"It will be interesting because I think the conditions fit him well. My horse likes small tracks and he's a good traveller, he's incredibly intelligent. I also think the distance, a mile and a quarter will be an advantage for him on that type of track".

"We have to take care of the horse"
But first in the calendar, a start at Solvalla in V86®-2 on Wednesday, where the winner gets SEK 40,000.
That doesn't make it hard to understand the trainer's priorities.
"The bettors need to understand that the most important thing is that the horse gets a race and a good experience that gets him in better form. Worst case scenario would be him being parked at 1:07 speed and having to race on the outside. If the choice is to race outside or get a pocket ride, I hope Torbjörn will choose the latter. We have to take care of the horse.

How come Torbjörn Jansson is driving on Wednesday?
"Because he's a good friend of mine and a good driver. Wilhelm Paal is suspended and I wanted someone who can handle the pressure of driving a horse like this in this type of situation".
Why hasn't Ringostarr Treb raced since Elitloppet?
"I decided together with the owners that he deserved a break. Then he got an infection and we chose to give him all the time he needed. I didn't want to train him without the supervision of his veterinarian Jonas Tornell and when he took a month vacation in the summer, so did Ringostarr Treb, that's why it's been so long".
How fast have you trained him?
"I've trained him a mile in 2:03 with a back half in 58 seconds. He felt good and his heart rate was too. I don't want to push him harder than that in training".
He had been off for two month before winning the Olympic Trot back in April, had you trained him tougher before that?
"Not really, but then he still had the winter in Paris in his body and the tough races down there really improved him. I don't think he's in the same form now, he doesn't feel as explosive, but hopefully this race can get him there".
Are you holding back on anything equipment or shoeing wise?
"No, he'll race as usual. Barefoot, American sulky and open bridle".
What will you tell Torbjörn about the tactics?
"I told him already last Wednesday to drive him like a trainer, not like a catch driver. If he thinks he can get to the lead without it costing too much, of course he can leave, but I wouldn't mind him being a little less aggressive".
A lot of V86 bettors will leave him alone on their tickets, your thoughts on that?
"That's of course up to each and every one, but I wouldn't. Of course he can win if the race goes his way. If he would get to the lead or sit covered up at a high pace. The way I read this race Örjan's horse (1 Canari Match) will get the lead and trot 1:10 over the distance. If so, we're not likely to beat him. I hope I'm wrong, but my main objective as a trainer is that my horse gets a good experience before his trip to United States" says Jerry Riordan.

Here's what Jerry Riordan has to say about his other horse on V86, 5 Zanzibar Effe in V86-5:
"It's a well bred filly who's a little sister to former Elitlopp participant Nesta Effe and several other good horses. She was sick all last year and she's a big filly which has made her a bit late. She doesn't trot all that good yet but she oozes class and she'll be a good horse in the future. We pulled her front shoes in her last start with was positive and we'll do the same again. She races in an American sulky since it's the biggest one I have and the only that she fits in. Despite that I don't think post five will be a problem as long as you take it nice and slow in the start. The track was very fast in her last start so that time looks a little better than what it really was but she gets better with every start and shouldn't be without chance here".