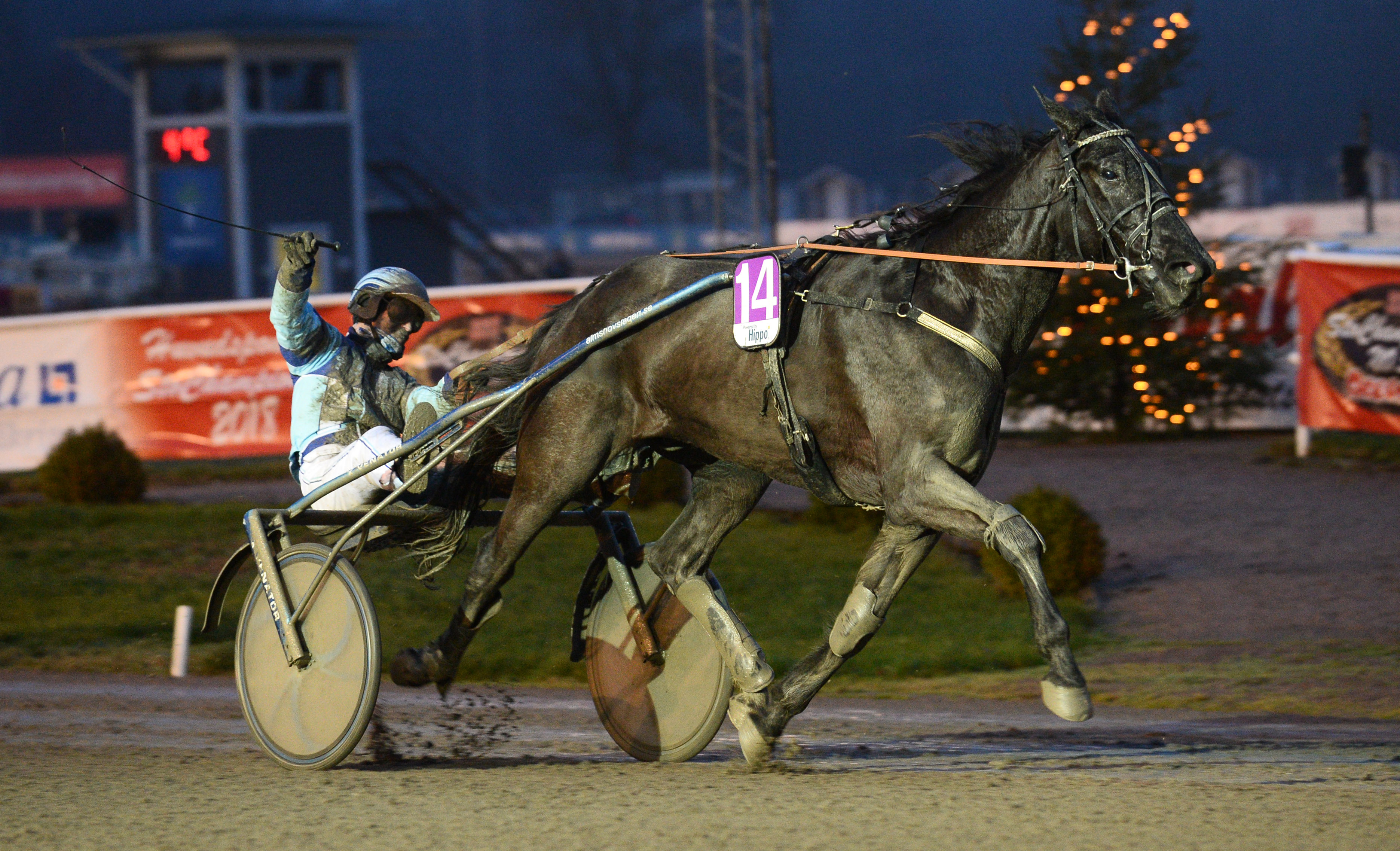 In the beginning he was just a lazy horse who wasn't very promising.
But once he started racing he showed a different spark.
Recent V75® winner Ibelieveinamerica is one of the horses who can win when he races on V86® at Jägersro on Wednesday.

Ibelieveinamerica (V86®-3) has won nearly half of the starts he's made. His eighth and most recent victory came on V75® at Axevalla on New Years Eve. After an impressive finish he was the superior winner.
"It was so much fun! And on New Years Eve on top of it all. When we came home our neighbors had made us dinner and the champagne was ready, so it was a lot of fun" says Louise Frumerie.
The amateur trainer is together with boyfriend Mathias Alm both breeder and owner of Ibelieveinamerica. But in the beginning it didn't look like he would have them toast with champagne.
"He wasn't very impressive when he was young. But he was such a sweet horse. We let a neighbor who was just getting into trotters borrow him. She had never sat behind a horse before but she jumped on and away they went it and everything went just fine. She ended up taking both her trainer and monté license with him".
The neighbor, Malin Larsson grew very fond of Ibelieveinamerica and when she got married he pulled their wedding carriage. But she thought the horse was too lazy and soon she had gotten herself her own horse to train. The laziness however was gone as soon as Ibelieveinamerica stepped on the racetrack.
"Two weeks later he qualified very well and a few weeks later in his first start he was really good" says Louise Frumerie.
He was then four years old and started out his racing career with three straight wins. He won five out of seven starts in his first year of racing. Last year, as a five year old, he won three out of 13 starts and finished top three in eight starts.

Knee demolished in an accident
Louise Frumerie has been an amateur trainer since the early 2000s and since 2003 she and her boyfriend are located at a small farm near Varberg on the west coast. Before she started training, she worked for others and she also spent a lot of time in the saddle. But she was forced to quit that following an accident.
"I got a horse on top of me who stepped on me and demolished my knee completely. I had five surgeries and was on crutches for years. I was very sad when i couldn't work with horse and ride to the same extent as before. It was a terrible time of my life".
Today Luise works in a store selling equine and other animal products and equipment and after working as much as her body allows her to, she's found a balance between work and the horses.
"At first I trained too hard and had a constant inflammation in that knee, but once I started working and was walking on a flat surface the knee got much better and the inflammation went away. I still have days when I'm in too much pain to be able to work but it's important to listen to your body and not push yourself too hard. I hope others can learn from that too, everything is possible as long as you keep it at your own level".

Named after a famous opening line
Today Louise Frumerie trains four horses. Boyfriend Mathias, who also is an amateur trainer, helps out with the training but he works as a blacksmith and his job in the business is to drive them when they race. Plus to name their own breedings.
"Mathias loves the Godfather movies and he has named many horses from those movies. It has become his thing and 'I believe in America' is the opening line in the first Godfather movie.
The small farm outside Varberg doesn't have the same training opportunities as the big training facilities the big trainers have but Louise does her best with what she has.
"We have a field out here which we've put some sand on and we train on that. If the surface isn't good one day, we'll go elsewhere. I know my horses very well and i know already when we leave the stable what their heart rates will be once we come back. I feel in the lines if they get tired and I train based on that".

"Has a very strong finish"
Ibelieveinamerica was supposed to have races on V75 at Jägersro on January 12th but was scratched.
"It was nothing serious, just some fever. He had to take it easy for a couple days. He's been training since and he feels good. I think the form should be the same as in his last start".
V86 this weeks comes with a jackpot and the pot is estimated to SEK 14 million. Ibelieveinamerica drew post three behind the gate over 2,640 meters and could very well end up a winner.
"He doesn't leave very fast and he can get himself in trouble because of that, but if the tempo is high and he gets a decent trip he has a very strong finish. If the tempo is low it will be much tougher. He doesn't mind bad tracks so if that would happen he has an advantage compared to most opponents. I'm terrible at handicapping but since he feels like he's in good form and often ends up on the photo it might be smart to use him on a V86 ticket".