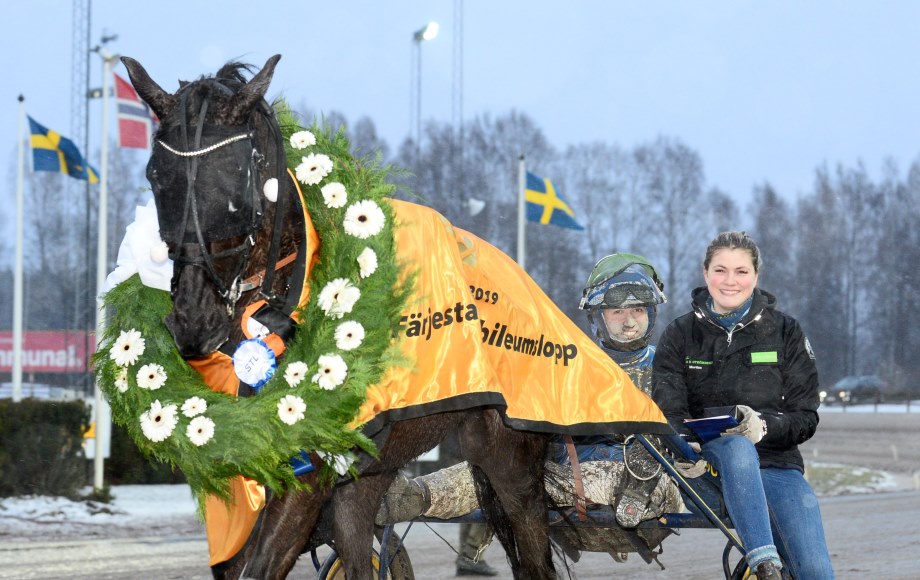 V86®: The Pirate is back - "Racing against horses he should be able to beat"

He is undoubtedly the horse of the winter season and he usually piles up V75® victories this time of the year.
Eleven year old On Track Piraten is still going strong and he's back on track now after a layoff.
"He's sound and feels good and he's racing against horses he should be able to beat" says Hans R Strömberg.

This Wednesday's V86® card is split between Bergsåker and Solvalla. At our capital's track 'the world's best Dala horse' will make an appearance after a short layoff. On Track Piraten is returning to the racetracks after a sub par performance and as we go into the winter season we're also entering his favorite time of the year. The last few years he has been piling up V75® wins during the colder time of the year. On Track Piraten holds the V75 record with 32 wins and it seems there's still another chapter to be written about this eleven year old gelding's amazing career. It includes 46 wins and earnings of SEK 18 million for Rättvik trainer Hans R Strömberg.
"He's no different from how he has been before. He's happy and he likes to train. Despite being eleven years old and having raced so many tough races he's still sound. He's a fantastic horse that way" says Hans R Strömberg.
"He likes the winter and to race with shoes and corks. That way he has an advantage towards his opponents who often are better when they can race barefoot".

"Sick in last start - throat infection"
After winning a cheaper lunch race two starts ago, On Track Piraten last raced in a V75 race over 3,140 meters in Skellefteå. But that time he was not quite himself and he made one of very few bad appearances in his career.
"He was sick in his last start and had a throat infection. He got some rest and after that we've trained him again and everything seems fine. He has gotten a lot of heats on the straight track and I've also trained him in 1:18/1,600 meters on a deep track. So he is well prepared" says Strömberg.

"Feels better now compared to earlier this fall - good chance"
On Track Piraten will be one of the favorites in V86-2. He will be driven by Torbjörn Jansson who has driven him twice before. Both times in 2015, four years ago.
"Torbjörn was fifth with him in a long distance race the first time and the second time he drove him they finished second to Delicious U.S. in Sundsvall Open Trot. But thats a long time ago now" says Hans R Strömberg.
What will you tell your driver on Wednesday?
"Not much. Just step on the gas".
What are your thoughts on the race and on his chances of taking win number 47 of his career?
"I was hoping for some winter-like conditions so that everyone would race with shoes. But I still think he's racing against horses he should be able to beat if he's in normal form. He feels better now compared to earlier this fall at least".
"He's got a good post position and he can leave well. He hasn't shown it in a while since he has mostly raced in long distance races lately. No reason to leave hard in those races. I think he has a good chance to win. He will probably race in an open bridle since I don't think it makes much of a difference with a pull down bridle. American sulky as usual" says Hans R Strömberg.