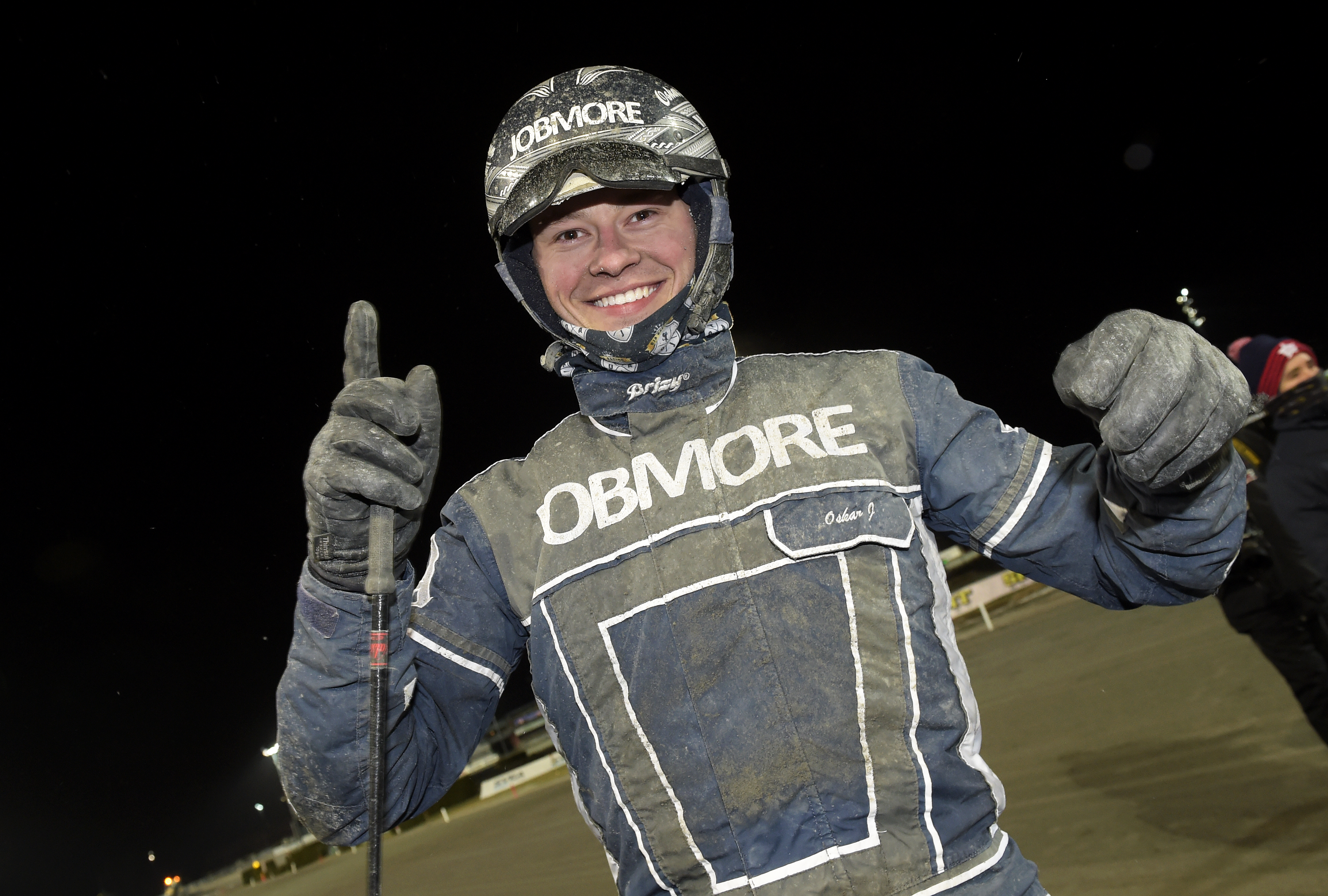 V86®: Things are looking up for OJA

Last year he was in a class of his own among the country's apprentice drivers.
Now he has 50 horses in training and faces a completely different challenge.
"I have equally high ambitions as a trainer as I do as a driver" says Oskar J Andersson who will jump up behind two interesting horses on this Wednesday's V86®.

After being part of the elite of the country's apprentice drivers for many years, Oskar J Andersson took the step to become a professional trainer.
That's something he had planned for a while.
Already three years ago the family bought the farm outside Sala where he is now training and he bought his first yearling at the kriterium auction in 2014.
A certain Urgent Call (V86®-6) who is the stable's poster boy comes into this Wednesday's start with two consecutive wins.
"I've gone side by side with Jörgen (Westholm) for many years at the auctions and I have also been part of training down those horses he bought. That made me learn and understand what to look for in a yearling. Urgent Call is the first one I have bought myself in Sweden and I'm very proud of what he has accomplished. He is on his way to make his first million (SEK).
His first, do you think he can make several millions?
"We have to see how it goes, but the horse is good and has trotted 1:11 parked on the outside and he's done well on V75®. My hopes are that he can progress further and stay at that level for a long time" says Andersson whose SEK 9.6 million in earnings last year placed him on 17th place among all of the country's drivers.

"Important to remain at the forefront"
The goal is now to reach the same numbers as a trainer.
After having started with a stable of 14 horses together with girlfriend Paula Pettersson, that number has grown to 50 in just six months.
"Top 17 as a trainer, what does it take? Ten millions? Of course the goal is to reach that number and then even higher. We have high ambitions. But even if it doesn't sound so exciting you work more for your own stable than for the numbers. The goal is to work and get the horses stronger and sounder and have a good atmosphere in the barn and make sure everything runs smoothly. By doing so the results will also come".
Are you satisfied with the results so far (12 wins in 67 starts and SEK 668,100 in earnings) during the first six months?
"I am satisfied, yes. The focus here in the beginning has been on getting everything up and running. We didn't have that many race horses to start with, just five or six, but the plan was to show that we had horses in good shape and that we also had a well functioning website. I think it's very important to be at the forefront when it comes to information and service for the owners. And I think we have managed to. Paula and I were prepared that horses might start coming in during the summer, but of course it's gone quicker than we ever hoped and thought it would".

Barefoot all around now
What do you want to achieve during 2020?
"It's all about progressing together with the owners we have, feel that the horses improve off of the training and are functioning well, that's the main goal. What that means in numbers is too soon to say, it depends on what the stable looks like then. What I would love to do is to pick out my own yearlings at the auctions, but those result will come two or three years later" says Oskar J Andersson who besides Urgent Call also will drive the Jörgen Westholm trainee Dream Cash in V86-4 this Wednesday.
"He won his last start even though it was sticky and rainy which he usually doesn't like. It wasn't that tough of a race but he put in a good effort considering the conditions. When Jörgen drove him the start before he got very hot in the lead when racing with a blind bridle for the first time. So he got to try a pull down bridle for the first time in his last start and that worked out very well. He didn't react much at first when I pulled it down, but when I pulled the earplugs and he could hear the opponents without seeing them, he really grabbed a hold of the bit. I assume he will race with the pull down bridle again and I think he is better racing from behind. The fact that he's been raced on the front so much is due to him being so quick behind the gate. I haven't had time to study the race yet but he's a horse who is good for the class he is in".
Can Urgent Call make it three in a row?
"I hope so. He had a little break after the start at Åby and he's on his way up in form again. He was very strong and tough in his last start and he's a versatile horse who usually can do a lot of work himself if needed. If the track allows it, he will race barefoot all around this time, other than that no changes and I think he should have a chance to win".