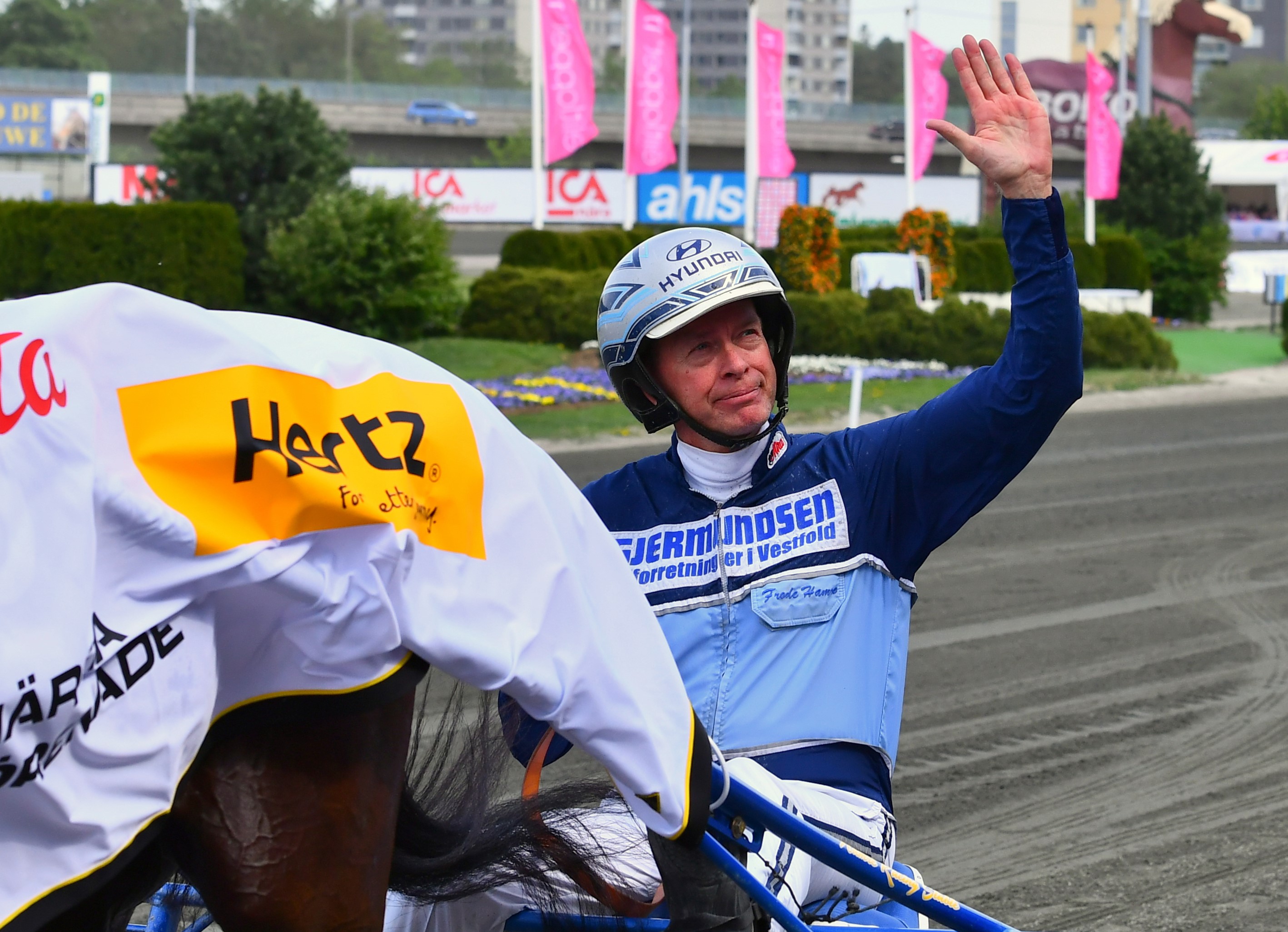 ​Last Saturday his super talent Ecurie D. won his ninth straight race.
On Wednesday he's racing another winning machine.
But it's not an easy task Harley D.E. has to face in the chase for his sixth straight victory.
"I definitely haven't given up but starting in the second tier over the short distance is always difficult" says the Norwegian top trainer.

The undefeated Ecurie D. came up with a fantastic effort when he defeated the Swedish Kriterium winner and others on last weekend's V75® at Mantorp. A very wide first turn and the rest of the race parked outside the leader did not stop the four year old phenom. He fought his way past the leader down the stretch and Björn Goop could hand drive him across the wire.
"I had a feeling that Björn wanted to get ahead of Bergh and Power in the start and he did, but the first turn was a bit tough. He looked strong but with 300 meters to go I was thinking that now he will get tired for the first time. He's also allowed to get lactic acid and I thought he was going to lose. But he just strode out and it was nice to see how his ears came up when he had beaten the other horse 20-30 meters before the wire. He knows what racing is about and he's an extraordinary horse, that's just a fact" says Frode Hamre.
After that victory the speculations about Ecurie D. racing in Elitloppet have gotten more serious. But he will not race there.
"He will not race in Elitloppet this year. It wouldn't be fair to a four year old with only nine starts. He will race at Solvalla that weekend, but not in Elitloppet. The four year old elite is a much better fit for him".
You have never driven him in a race. Don't you get the urge to sit up behind him?
"Not anymore. I don't want to be the first guy who loses with him" Frode Hamre says laughing.

Still in top form but tough conditions
Harley D.E. (V86®-7) does not have the same starry lustre as his two years younger stable mate, but he is also used to going to the winner's circle. He has won six out of seven starts this year.
"He has raced very well and he has won both over the middle distance and the sprint. I think the middle distance might be his best distance, but he's getting better and in his last start he won from behind which was a very positive sign. He has always fought harder when he's been in the lead or parked outside the leader before, but in his last start he showed another good side of him".
Harley D.E's newly found feature to fight also when coming from behind raises the hopes for the Wednesday start at Åby. But post position ten over 1,640 meters still makes Frode Hamre lay a bit low.
"Everything is well with him after his last start, he trained last Friday and felt good and strong. I expect him to be as good as he has been but he has a tough task ahead of him here. To start in the second tier over 1,640 meters when they might trot 1:11 upfront isn't easy. But if he is able to find a good position and if he isn't too far off the leader when they turn for him, then I know he will finish well".
Frode Hamre also has Amazing Case in the same race and she had more luck with the draw and will start from post position three. In her last start she gave up the lead after 1:09 speed the first 500 meters and hung on to finish fourth.
"I think she held on well considering the tough beginning and that the first kilometer was trotted in 1:11. I won the race myself with Calina, who is a good horse. I don't know if Amazing Case will take the lead now but she is very quick behind the gate and completely safe. I think she is able to trot around 1:11.5 and she might be third, fourth".
Could Amazing Case finish ahead of Harley D.E.?
"Harley is a much tougher horse who can do a lot of work himself in a race. She is not that type of horse. On the other hand, she has a much better post position and the best horse doesn't always win".

Good conditions in the first V86 leg
Frode Hamre has two more starters on V86 at Åby and out of the two he thinks Jetske Beemd (V86-1) has the best chance. She put up a great effort in the middle of April when she fought hard to win after being parked outside the leader at Årjäng. But in her last start she made a break in the lead down the stretch.
"She was very good in Årjäng and she is good for her class. Her last start was in a 2,600 meter race which a bit too long for her. She was also pulling a bit along the way and got tired. There was a recall and she got too geared up after that, so she burnt a lot of energy before the race even started. She held on OK and everything seems fine with her for this start. It's a short distance race, a good post position and the driver knows her. I think she will race well".
"Credicone (V86-3) has never been better than he is now, he's in top form, but it was a bad idea by me to enter to this handicap race. There are way too many for him to go around, especially at Åby with the two passing lanes and he has to try to get a check".