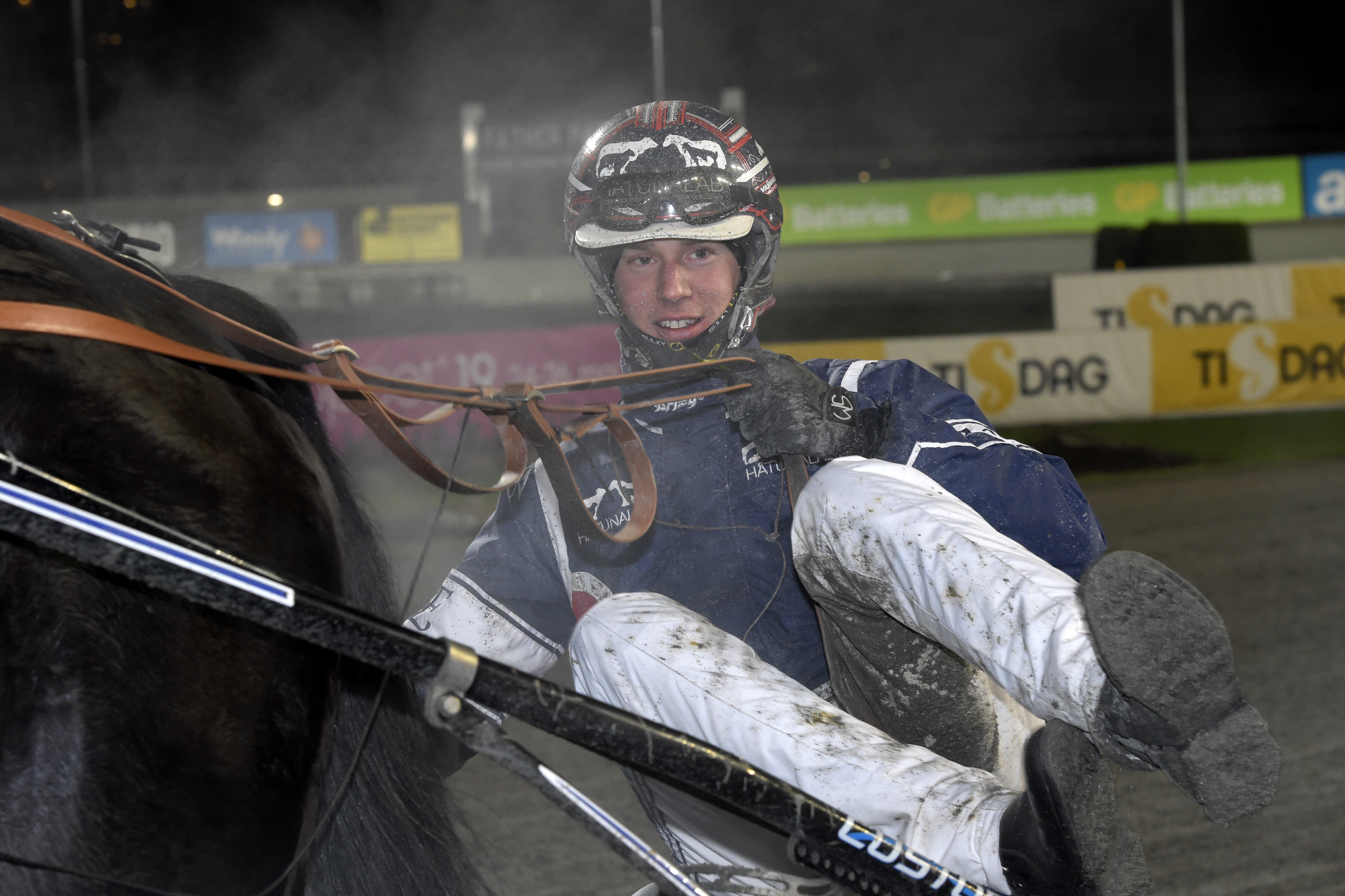 Last Wednesday he was named the recipient of the Nordin scholarship and also won with his first 100-1 shot.
This week he's on the hunt for new victories and for Travronden's gold watch.
"It was a fun night. Hopefully this one will be as memorable" says Anders Eriksson, the apprentice driver who is behind this week's V86® jackpot.

When Anders Eriksson guided Celinn Palema to victory at 109-1 in V86®-2, he was also a big reason that nobody found all eight winners, which meant we have a jackpot this week with an extra SEK 5.7 million in the pool.
For Eriksson it was the end of an overwhelming day which started with him being announced as the winner of the Nordin scholarship, which besides the honors also means SEK 10,000 to spend how he sees fit in order to improve his career within the harness racing business.
If he really needs to improve.
Coming out of a family where his dad Ulf Eriksson and uncle Peter Eriksson both are professional trainers and also have a cousin named Örjan Kihlström, it's no surprise his career turned out this way.
"My great grandfather had some horses, but for our family it really got started with my grandfather Kjell who was one of the biggest trainers in the region, especially in the 1970s. He was the leading driver at Bollnäs racetrack for a few years and had around 30-40 horses during his glory days" says Anders Eriksson who grew up at another training center, Stig H Johansson's farm Stora Alby.
"My mom Helén Nilsson worked as a caretaker for Stig H Johansson for 25 years and I lived there until I went to the United States as a 19 year old. From high school I spent all the school breaks in the stable and worked for Stig, except for a few summers when I helped out in my dad's and uncle's stables. So it's always been horses for me" says Anders Eriksson who after working for Bernie Noren for one year in North America returned to Sweden and Stefan Hultman, followed by another three years working for Stig H Johansson before coming to his current employer Svante Båth.
But despite his resume it's only the last two years we've started hearing about the 28 year old as a driver.
"I was just a caretaker early on. When I returned to Sweden I didn't have a lot of connections and even if I got to drive some races during my second stint for Stig H, it was only 30-40 drives per year. But after that I started having some success and then it just snowballed. Now I drive as much as I can and have time for, I just love it".

"Biggest you can win"
Last year Anders did the first part of the trainer's school and he plans on doing the remaining part next winter. But before starting as trainer, there are many goals to achieve as an apprentice driver.
For example walk in dad's cousin's footsteps and win Travronden's gold watch, Solvalla's apprentice driver's series that's been around since 1957 and has - except for Örjan Kihlström - been won by Torbjörn Jansson, Stefan Melander and Daniel Redén.
"For me, the gold watch is the biggest one you can win as an apprentice. The race also has a lot of history. I hope others still think it's as big, even if it has taken a backseat in recent years".
So also this year, when it's being raced before V86 starts with the final scheduled as race 5 on Solvalla's card, where the drivers get to pick horses based on their point totals.
Anders Eriksson finished second behind Oskar J Andersson in the standings with twelve points, which he will take with him to the final day.
In the two elimination races he's been drawn on Valentine Heart (race 1) and Ready To Flex (race 2). None of them are picked top four in the Solvalla track program.
"Last year it was pretty obvious who the best horse was in the final but this year it's a bit more open and that's good. It's still not a very even race, which is too bad since it has a first prize of SEK 100,000" says Anders Eriksson who has an idea on how to put the race back in to the spotlight again.
"Why not race it same day as the V75® finals, the day after Christmas? I guarantee you more people watch those V4® races than the V5® races this Wednesday".

Another surprise win?
Wether he'll be wearing a newly won gold watch or not, Anders Eriksson has two more drives Wednesday evening - both on V86.
That's a duo he knows how to surprise the bettors with.
On September 26, Eriksson won the last V86 race with Henrik Larsson trained Global Thunder. Being on only 4% of the tickets, they made sure the payout surpassed SEK 1 million.
"He was very good then, but I think his form is even better now. He was really sharp in his last start, unfortunately so sharp that he jumped it off 800 meters from the finish line" he says about the horse racing in V86-2 this Wednesday.
"We got in to a tight spot when I moved him out three wide behind a horse who had been hung out there the entire race. We got stuck behind him and it ended with a break. He showed he's in great form and this week I will be a little more focused if something like that would happen again. This race doesn't look any tougher than last week's so if I can give him the right trip, hopefully sit until the last 600 meters at a high pace, we should have chance to win".
Expectations are a little lower when it comes to last week's mega surprise Celinn Palema who goes up in class in V86-8.
"I didn't know much about the horse last week and I thought beforehand that it looked like a good spot to sit at the pylons and hope to make some money".
"But the trainer (Bo Ralfelt) was very optimistic and had no intentions of staying at the pylons. In hindsight I'm happy I listened to him and kept the horse two and three wide instead. The horse was really good and both me as well as the betting public were way wrong there".

Can you repeat the surprise?
"I doubt that. It's a much tougher race. It looks like a good spot to sit at the pylons and hope to make some money..."

Here are Anders' comments on Svante Båth stable's V86 starters:
"2 Duke of Mearas (V86-2) was given a perfect trip and finally got a win in his last start, that was well deserved after many good efforts. He left a little faster but he's not a leaver or a horse that will benefit from the short distance. Compared to Global Thunder, Duke Of Mearas can handle a tougher trip, but Thunder is quicker. A high pace would help and the horses are pretty even, but due to the distance I hope my horse has a slight advantage".
"3 Global Withdrawl (V86-3) got rough gaited and made a break in his last start, the Breeders Crown final. My guess is that he got a little foot sore on that track, we haven't found anything wrong with him and he has trained as usual following that. I trained him two hours ago and he felt great so I wouldn't worry about his form. He's not by any means trained to be on top for this start, but he's as good as when he won those races and that should give him a good chance to win this. He's won most of his races with shoes, so that's no problem".
"1 Global Wizard (V86-4) is stabled in Sundsvall so I don't know anything about his current form. He's a good horse but it's hard for me to say anything about his chances here".
"11 Global Unlimited (V86-5) is also stabled in Sundsvall, but I know much more about him since I drove him in his last start. He won convincingly and it was well deserved after having raced against very good horses all year. Since he's a strong horse and a little lazy, I only see the distance as an advantage for him. Without knowing the opponents all that well, I think he should be able to do well in a race like this".
"7 Idun A’Lir (V86-6) is stabled here in Knivsta and I sit behind her every now and then in training, as recently as last week. She's line gaited and has had problems with her gait and with interfering which is why she has made breaks. She's been given many heats at Solvalla to get experience and it seems like she has really improved the last couple of weeks. Her strength is plenty for her class and even if she's getting better and better you still can't trust her".
"9 Virunga (V86-8) interfered shortly after the start in her her last start. She's done that before, but it was still unexpected. She was very good when she won two starts ago. She's stabled at Stora Alby so I don't see her daily, but if her form is intact she could finish top three here. It looks like a tough race so I doubt she will win".