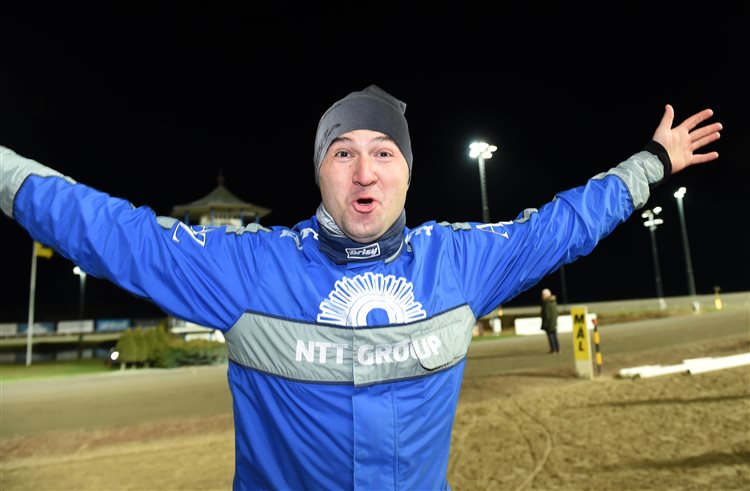 The winter is still hanging on in Sweden.
But for one of the biggest trainers at Åby, spring is in the air.
"You can tell by looking at the horses, at their hair and their weight that they're feeling better. It will be interesting on Wednesday" says Admir Zukanovic who is is sending out three horses on this super jackpot V86® Wednesday.

The forecasts for this week's V86® tracks Åby and Solvalla are showing freezing temperatures for Wednesday night.
But with almost SEK 13 millions added in the "eight-pool" (payout for picking all eight winners) chances are the betting temperature will reach boiling point.
A rare super jackpot is in play and ATG® is projecting that a sole winner can walk away with as much as SEK 21 millions - which would be twice the current V86 payout record.
One of the key persons on V86 is Admir Zukanovic, who currently is on his third year as a professional trainer and the he is the trainer for the big owner Stall Denco.
"I can't say I'm pleased with last year's results, we have higher expectations than that. It felt like we didn't get the bounces to go our way and the last four months of the year we were battling sickness and bad blood counts" Zukanovic sums up 2017 where the earnings got up to SEK 3.9 millions and a win percent of 13.
Compare that to SEK 4.4 millions and a win percent of 18 in his first year, 2016.
"If you look at the stock it looks less promising this year actually. Last year we had several good four year olds to hope for, this year we barely have any. So there's no money for us there. But the main things is that the horses have to stay healthy, then we should be able to beat last year's numbers. We also have several two year olds to hope for towards the end of the season. We have five by Solvato in his first crop and that's very exciting to see what they can do".
When it comes the status of the V86 horses, Zukanovic sounds much more positive.
"Compared to a couple months ago when they were all sick, it's a big difference. You can tell by looking at the horses, at their hair and their weight that they're feeling better now. Most of them are back training and they feel better and stronger than before".
"Then it will take time to get them all back. A horse who's had problems with the blood counts for four months, you can't just turn out for two weeks and then race them. You can say it takes another four months to get them back in form".
So you can say the spring is really in the air for Stall Denco and Admir Zukanovic?
"Yes, it really feels like it. I'm hoping for a few fun months ahead of me".

Much more focused as a gelding
Coming up first on the schedule is V86 where he has horses in three of the eight legs.
We start with 3 Valentino Strix (V86-1), well known from V75® who makes his first start of the year and as a gelding.
"We couldn't keep him as a stud anymore. Many who have seen him have noticed it looked like he had 'five legs' in some of the races. He's been screaming at the other horses and even tried to mount them. His last start was the end of it, he had zero interest in racing".
Has the horse changed after being castrated?
"Yes, he is much more harmonic now. He's calmer, more athletic and more focused. It did him well, he feels like he's on the right way. He used to scream at other horses in training, now he's focused and 'two fingers' to drive.
How well prepared is he after his break?
"He is very well prepared. I've put quite a bit of training in to him. Since he used to have problems staying sound, I was always afraid to train him too hard when he was off. But I have now. He's gotten more and tougher training than he's usually had after a break. We haven't been super fast with him though, just a couple intervals at high speed and then he felt good and focused".
Sounds like we have to look out for him?
"I think he'll race well right off the bat. How far it will take him depends on how the race will unfold. He has a very strong last 600 meters, let's just hope the tempo is high".
Any changes?
"Being that it's volt start, we won't use the American sulky this time and the murphy blind comes off and we're adding a blind bridle instead. His feet are good to race barefoot, but since it will be freezing we'll most likely race him with shoes".

Wants dry air
The next horse from Zukanovic stable is 5 Rushlight Face (V86-3) who despite being five years old only have seven lifetime starts, of which he has won three. He lost his last start on the front end as the odds on favorite though.
"He's a big, heavy horse who has taken his time developing. He has a sensitive throat and he has problems when the air is damp and humid. He's at his best when it's cold and dry so he would probably be better off up north than on the west coast. But it's supposed to be cold this week so I hope he'll get the conditions needed".
It was first his time in the lead in his last start. Change of tactics for this start?
"No, this horse likes an even and tough pace so I would like to see him in the lead if he gets there again. He has plenty of ability for his class".
Any changes on him?
"None. Regular sulky, shoes and open bridle again".

"Won off a break many times"
The last horse from the stable is 10 Caddie Jo (V86-5) who risks losing all his starting points if this start doesn't go well.
Does that mean you have him really sharp for this start?
"No it doesn't. But he's a horse who usually races well coming off a break. Before his last win he had also been off and he's prepared the same way with a faster workout last Friday in which he felt good".
Were you aware that he has taken four of his seven career wins coming off at least a month's break?
"I didn't have the exact numbers but I knew he's taken several of his wins coming off breaks. When he races too much he kind of loses his attitude. That's what happened in his last start".
Any changes on him?
"None. He'll race the same way he did in his last start".
How will a sloppy track affect your horses?
"Not negatively as i see it. Valentino is at his best on a firm track, but has won over bad tracks too. Rushlight has won in a snowstorm, for him the air is more important than the track. Caddie took his last win on a sloppy track so he doesn't mind".
Sounds like three exciting chances for the V86 bettors to consider. Who do you think is your best chance?
"I would have to say Rushlight since he's the one who's been racing lately and has a good post position. But I hope the other two will race well too. It will be interesting too them after their time off, especially Valentino" says Admir Zukanovic.