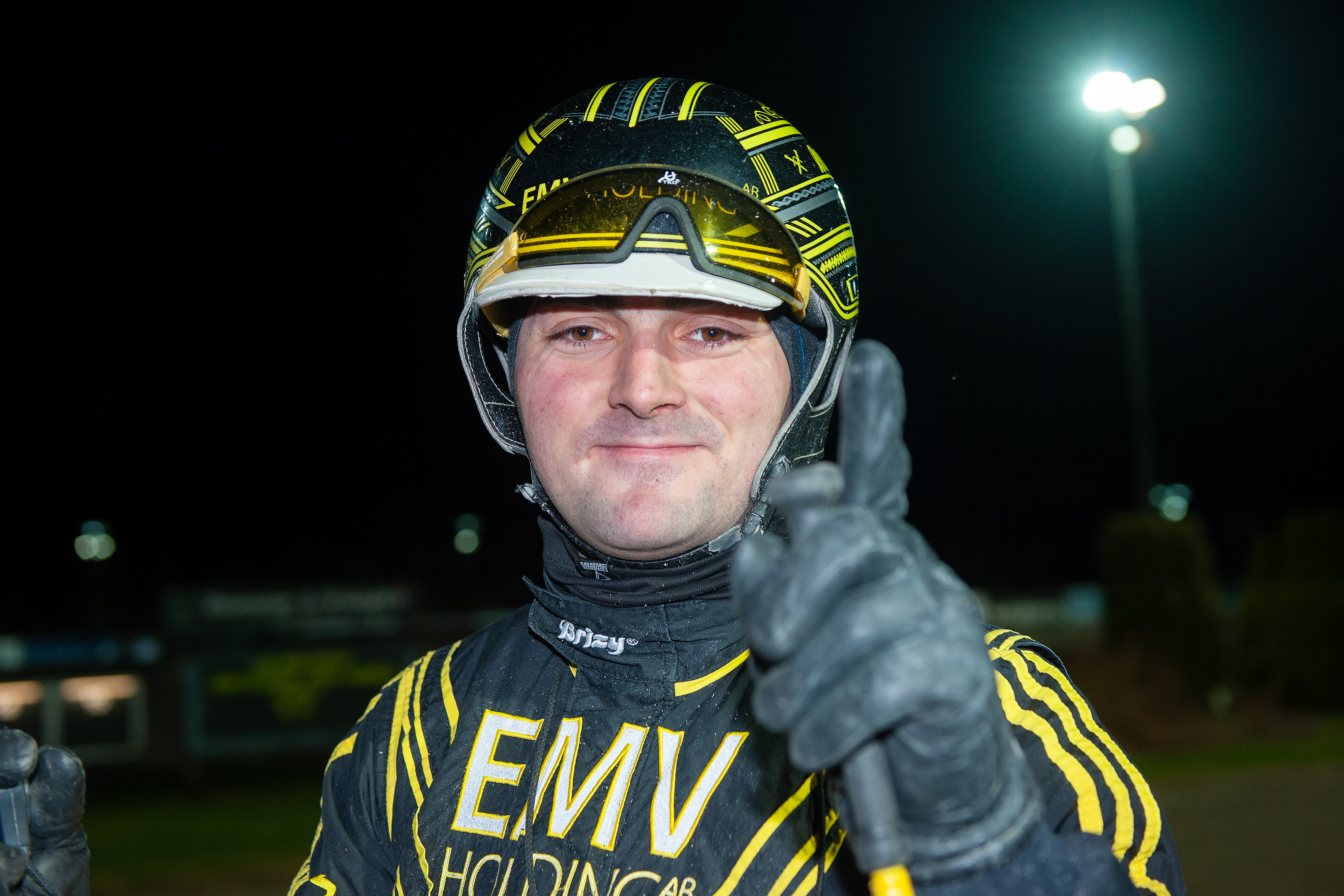 Last Saturday he contributed to a payout worth millions when he won twice on V75®.
His victory parade could continue Wednesday on V86®.
"Virgin Maiden has a great chance to win" says Marc Elias about the jackpot card.

Since his father Conrad Lugauer recently had surgery in his injured arm Marc Elias is getting bigger responsibilities as a driver.
He handled them gallantly during Kalmar's V75® day. First he won with odds on favorite Il Duce Boko in Klass II and followed that up with an upset win with Gareth Boko in the Gold division. To top it off, he won the last race of the day with American Hill. So there was plenty of reason to celebrate on Saturday night.
"I didn't celebrate much. I left the barn around 1 AM in the morning and by that time I was pretty tired after a long day. But we stopped at Burger King on our way home" says the 25 year old laughing.
There were more likely bigger parties among the bettors who built their tickets around Marc Elias. Only six tickets had all seven winners and they were worth SEK 3.4 million each.

"Very quick out of the gate"
On Wednesday there might be a new reason to celebrate for the fans of Lugauer stable and Marc Elias.
Added jackpot money means that the pool for all eight winners picked will amount to SEK 16 million. Lugauer stable has four horses competing and first to race is Virgin Maiden (V86®-1). She won convincingly in her last start from outside the leader. The plan now is to go straight to the lead from post two behind the gate.
"She's our best chance of the night. We were happy with her last start and she has trained well after that, so the form should still be good. She's very quick out of the gate and will probably take the lead. Once there, I think it will be hard for the others to beat her" says Marc Elias.

"This class is perfect for her"
Super Steve (V86-3) did not have the same luck in the draw as he drew post twelve in the second tier behind the gate. He raced as recently as last Wednesday when he finished fourth after having trotted the first turn three wide before getting to the lead.
"We were pleased with him. The first turn was a bit too tough for him and maybe 1,600 meters isn't his best distance either. I think 2,100 and 2,600 meters fit him better. We got post twelve this time and are left to what the others do. We might race him with a pull down bridle for the first time. He's a longshot here".
Bernts Ulrika (V86-5) fits the class perfectly (closed at SEK 220,000 in lifetime earning) with earnings of SEK 218,700. But the six year old mare hasn't raced since May last year.
"There hasn't been anything wrong with her. Racing in the summer is tough so we decided to give her some time off. She has trained consistently since late fall and she has been to Jägersro twice. The first time she was just ok but we were pleased with her the second time she trained there. She trotted 1:17 and wasn't tired" says Marc Elias and continues:
"This class is perfect for her. Sure, she can be tricky with the 'volt' start but Hanna (Lähdekorpi) who will drive her is good and she has done excellent with other horses she has driven for us. We'll see how she is now come race time but it feels like the form is coming and the amateur races are easier too, so we think she should be able to finish top three here".

Dangerous with the right trip
Last but not least to race from Lugauer's quartette is Gambit Brodde (V86-7/DD-2). He puts up good efforts all the time and in his last start he finished third in a V86 race after being first over the first kilometer before getting a covered up trip second over. Down the stretch he got the chance on the inside but couldn't catch the winner Dallas.
"He races well all the time but I think we've been racing him the wrong way. He's better when he gets a covered up trip, which I hope I can give him this time. But he feels good and has trained well after his last start. From post nine a lot will depend on how the two horses in front of us can get away. If he gets away well and finds a spot near the front, then he should have a chance to win. He might also race with a pull down bridle for the first time".