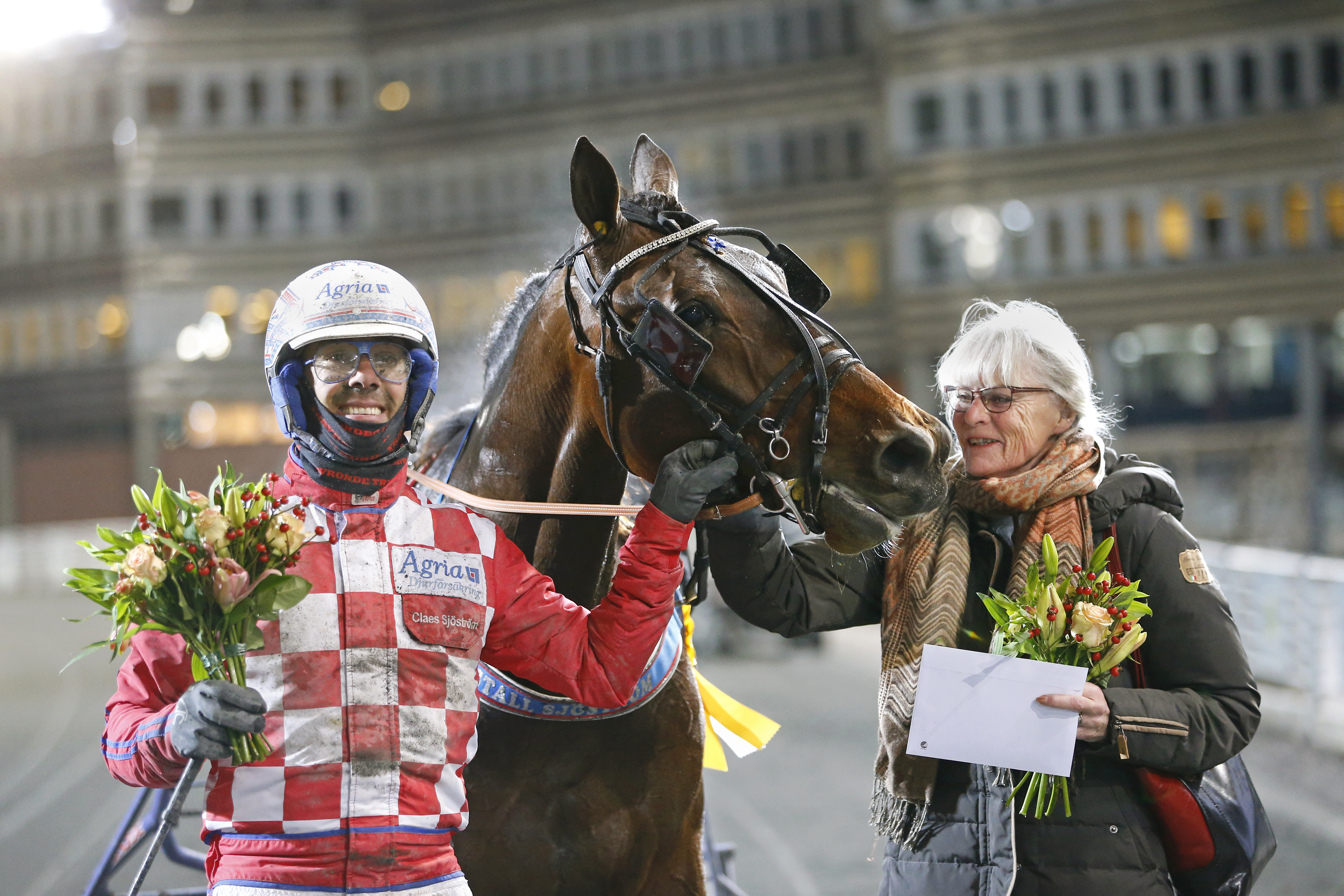 V86®/jackpot: Not that troublesome anymore

He leant his horse out for the World Driving Championships, Swedish Championships for female drivers and the race Gotlandssmycket this past summer.
All which resulted in victories.
Trainer Claes Sjöström used to describe four year old Vine Vision as difficult to drive earlier.
"He has gotten better on all counts and I don't think he's ever felt as good as he did in his last start" says the Solvalla trainer his V86® starter.

Nobody found all eight winners in last week's V86® which means jackpot time this week where a sole winner can take home SEK 13 million with all eight winners picked. Vine Vision has held good form for a year now and he definitely has a chance to win V86-2 at Solvalla. The four year old has four wins in twelve starts so far this year and has been very consistent. Claes Sjöström has had to re-evaluate his horse. The gelding has always shown that he is talented and he's not particularly difficult to drive anymore.
"I always used to say that he was a bit tricky to drive but that has pretty much disappeared. He has shown a lot of progress over the summer and he hasn't exactly had any bad drivers either" says the Solvalla trainer.
Since late last year Mika Forss, Yannick Gingras and Emilia Leo have all won with Vine Vision. In the World Driving Championship last spring, American driver Yannick Gingras sat up behind Vine Vision and the instructions were simple.
"The only thing I told him was that he can't leave all that fast but if you can just find first over with him you should be good. Gingras said it was no problem at all with instructions that simple. Emilia has won a couple of races with him and in Gotlandssmycket at Visby he wanted to call the shots himself and won after having trotted the first kilometer in 1:11" says Sjöström.
When Kevin Svedlund drove the horse in an apprentice race at Gävle two starts ago it ended with a break and a disqualification. Vine Vision was placed outside the leader with 1,500 meters to go and the plan was to use his strength to win the race.
"He looked like the winner but he made a break when Kevin asked him to move to the front with 600 meters to go. So even if most of his troubles are behind him, he can still be a bit tricky if you don't know him" says Claes Sjöström.
"Felt fantastic in his last start"
On Wednesday the trainer will be in the bike again. Vine Vision will be one of the favorites following the win at Solvalla in his last start when he swept the field in the last turn. It has been a long and successful season but the form is rather peaking up than down.
"He felt fantastic in his last start - the best I've felt him all year. But that's no guarantee for him behaving again, he can still be up and down like that".
Up and down how?
"If things don't go his ways in the races he gets sour. In his last start everything went his way with a high pace and all. He likes longer distances better than short ones since he's not that quick. But he's gotten better with that too. Someone timed him in 1:10.8 speed last 700 meters in his last start. So he doesn't lack speed completely I guess" says Claes Sjöström.
What can you tell the betting public?
"I think the draw came out okay for him. But he needs some luck with the trip, even if he can do some work himself too".
V86-4 is a race for fillies and mares where your trainee Angel From Above is the only filly in the race. She raced well finishing second in a Klass II race at Romme in October.
"Yes she was very good then. She was good in her Oaks elimination too but had a bad post there. In her last start she got run into with 250 meters to go, if not she would have been right there in the photo. She felt great and it's the same thing with her - that was the best I've felt her all year too".
The fact that she's the only three year old in the race must be a disadvantage though?
"Nah, she will be four in a few weeks so that doesn't worry me. I have a good feeling about her and I think she will race very well. I saw she drew post one which is good. I don't know how the others can leave but mine is quick".
Any equipment changes on either Angel From Above or Vine Vision?
"Both might race with shoes behind, should the track not be perfect".
In V86-6 you have Happy Romeo, a long distance lover who will get a chance over 3 kilometers again. How do like his chances?
"In his last start he raced very well on 2,140 meters so he's pretty versatile. I want to lay a bit low with him. He was treated and missed some training after his last win so his form is a bit of a question mark. Not without a chance to win, but he might need this race".