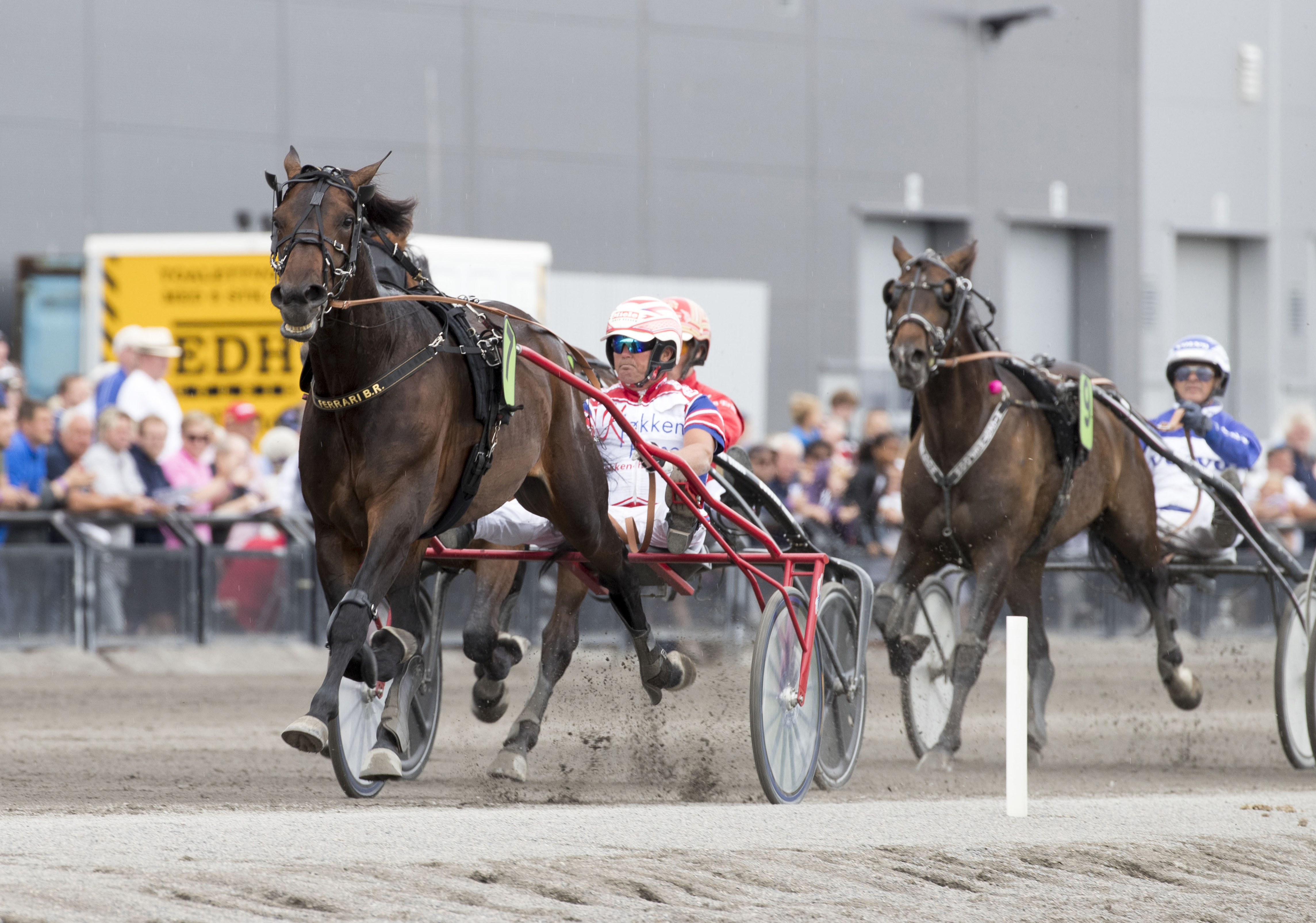 15 years ago he created an euphoria in his home country by winning Elitloppet.
On Wednesday Per Oleg Midtfjeld is back in the spotlight with four horses racing on V86®.
Among these we find world champion Ferrari B.R.
"Ferrari feels better than in a long time and I think he will race very well. But I have another horses who has a better chance to win" says the visitor from west.

Record breaking sized pools that keep coming one after the other, spiced up with a juicy jackpot.
It's a safe bet that V86® will be red hot on Wednesday.
ATG® estimates that a sole winner would take home SEK 19 million.
To get to that money, listening to a neighbor from a shut down country in the west might be a good idea.
Former Elitlopp winner Per Oleg Midtfjeld is sending four horses to race at Solvalla, but isn't making the trip himself.
"Should I make the trip myself, I would have to spend 14 days in quarantine when I come back to Norway. Then I wouldn't be able to take care of the stable so that's really not an option" says the trainer/driver of the former Elitlopp winner Steinlager about how to manage things in these Corona virus times".
"The truck driver is allowed to cross the border. Torbjörn Jansson has helped me with a caretaker who will meet up with the horses at Solvalla to take care of things there. I will help them over the phone as much as I can. That's how we have to work now," says Midtfjeld, who is happy that there is still a country in Europe to race horses in.
"We try to work and train as usual but it's a bit odd when there's no racing of course. I follow the races in Sweden and it seems to work very well, even if there are no spectators. Racetracks have so much open space, that there isn't the same risk of getting infected there as in many other places so I hope we can resume racing in Norway too soon. They are supposed to come out with some type of word this week".

World record as a four year old
In the quartet making the trip across the border is a current world record holder.
Ferrari B.R. was an extraordinary talent who amazed everyone when he won in 1:09.9/2,100 meters at Jarlsberg in May as a four year old.
That is still the fastest time in the world for a four year old on the middle distance on a 1000 meter (5/8 mile) track.
The elitlopp invitation was handed out, but Midtfjeld chose to race his horse conservatively in the Norwegian four year old stakes before he lost as the mega favorite in the Norwegian derby.
From then on, most things have gone wrong.

The veterinarian found the problem
A long layoff due to sickness ruined most of his five year old campaign and last year as a six year old he didn't live up to the expectations.
"The horse had a throat issue in the derby and after that it's been nothing but problems. He's had sore fetlocks, infections and other things. Even though he won the Norwegian Championship last year he wasn't at his best that day or at all last year" says Midtfjeld and continues:
"We took three trips to veterinarian Jonas Tornell in Sweden after his last start and he finally found an inflammation in a heart valve. We don't know how long he had had it for, but he got a six week long treatment and then we started training again. We see a different bunce in his stride now and a much more alert horse" says Midtfjeld who is positive about his horse returning to the racetracks on Wednesday.
"It will be great to see him on the track again. We have been able to train him consistently since January and prepare him the way I wanted to. The fastest he has trained is 1:16/2,100 meters and he is well prepared for this".
How do you look at his first race back?
"We drew a bad post position and I would like to see Torbjörn drive him conservatively and save his speed for the stretch. When he set the world record he raced barefoot, with a blind bridle and in an American sulky for the first time. He has raced in the American sulky many times since, but we haven't been able to race him barefoot since his hooves behind aren't all that good. So he will race as usual - barefoot upfront - on Wednesday. In Sweden I think he races best in an open bridle since the driver can use the whip (forbidden in Norway), so he will do so on Wednesday. Where he finishes isn't the most important thing for me on Wednesday. As long as he races well and crosses the finish line at full speed and feels as good as he does in training, whether it's enough to finish second or fifth doesn't really matter. I want the bettors to know that I think he will race very well" says Midtfjeld who instead wants to point at another horse as his best chance on Wednesday.
"Ilenna Bonanza is a horse the bettors have to look out for. She's a horse with suitable conditions who can leave quickly and she likes racing in the lead. She will race with her optimal equipment which she hasn't done in a long time and she should have a good chance".

This is what Per Oleg Midtfjeld has to say about his other V86 starters:
"3 Euklid A.T. (V86-2) is in much better form than what the program says. Two starts ago he finished very well from a tricky spot and in his last start he got too grabby when I tried him with a blind bridle and he made a break in the start. He will race with an open bridle since I want him to see the whip - in Norway he usually races with a pull down bridle. He will race in an American sulky, which he hasn't done in a while. He has raced in it three or four times, last time was when he won an apprentice race last fall. He will also race barefoot all around which he also hasn't done in a few months so all together I hope this will have a pretty good effect. He doesn't leave very quickly so he won't have a chance of getting the lead. There are some pretty good horses in the race, but I think he should be able to finish third or fourth".
"8 Key To Happen (V86-4) is a quick little horse who always does his best but doesn't really measure up to the best ones. He will race barefoot upfront and in an American sulky as he's done in most starts in Norway too. From a terrible post position I will be happy if he can make some money".
"3 Ilenna Bonanza (V86-8) started from a bad post position at Åby in her last start and she finished just as fast as the winner did so that was a good effort. She has trained well after that and she's in a better spot here, over a suitable distance. She leaves very quickly and likes racing in the lead, she has won many races from there. We had planned to race her barefoot in her last start but we put shoes on her due to the rain. We hope for better weather now so she can race barefoot, which she has done in most of her starts. She will also race with a blind bridle, which she didn't do in her last start but has done often lately. The biggest change will be that she will race in an American sulky, which she hasn't done since she raced in Bergen last summer. It worked out well then and I hope it will again since it's been a while now. I would say she is my best chance of the night".