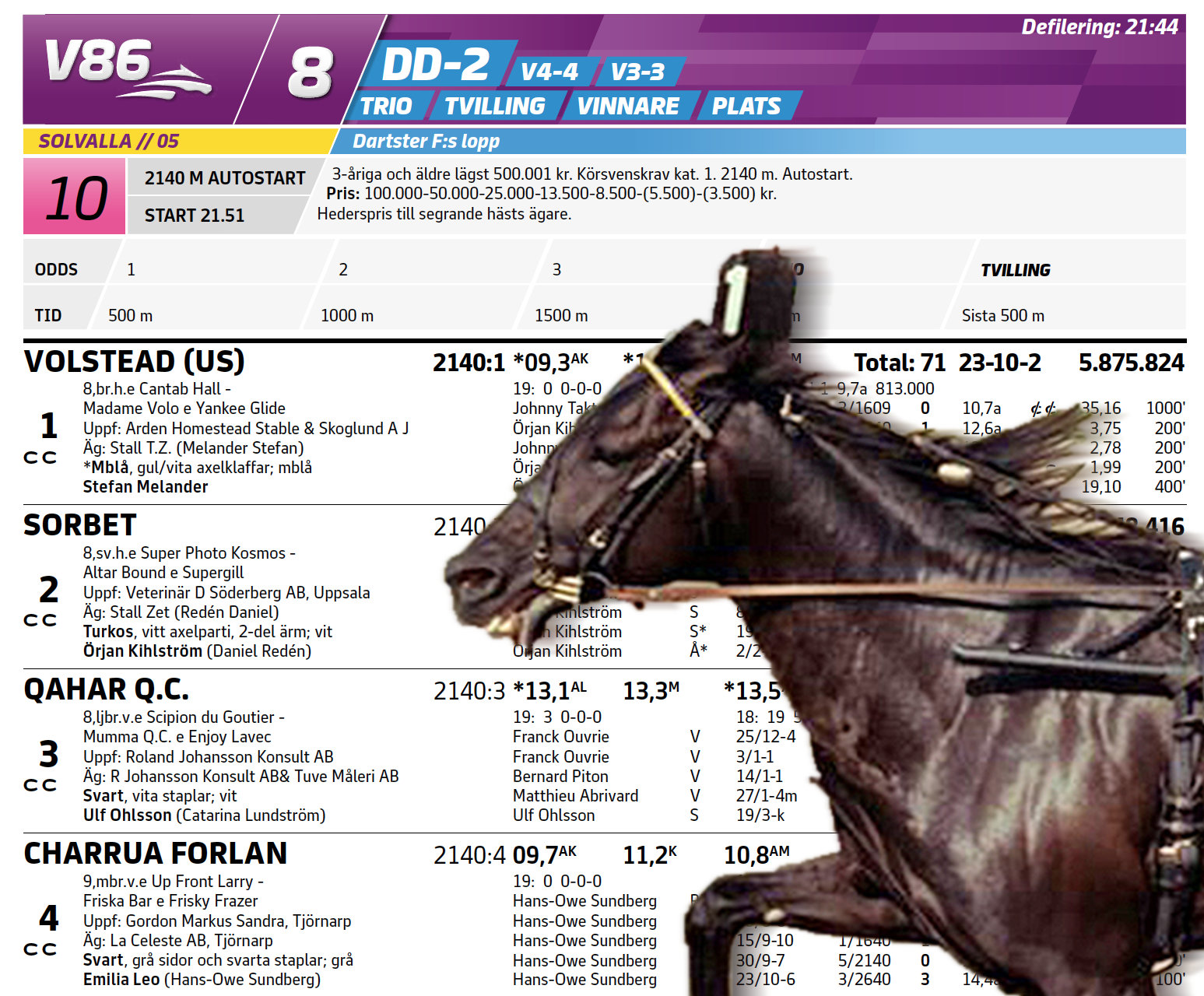 V86®/jackpot: Solvalla closing out with a great race

What a race it turned out to be, the memorial race for the eighties hero Dartster F. at Solvalla.
This Wednesday's V86® is enticing with SEK 13 million for a sole winner and it's closing out with a race over 2,100 meters with some of Sweden's best trotters.
"I have a soft spot for Muscle Hustle, a horse I'd love to see in Elitloppet" says handicapper Mattias Spante.

Solvalla and Bergsåker are offering a good V86® card on Wednesday with a delightful finale.
These days when the Olympic Trot is in focus some trainers sneak off to Solvalla to race some really good horses in the open class.
Dartster F's race only attracted eight horses behind the gate but the quality is high.
The Solvalla handicapper Mattias Spante thinks that it will take at least four horses to be safe in the eighth and final leg of V86.
"It's a small but exciting field. Even though the form is a question mark on a few of the horses, you can't count them out. The way I see it, four horses should be enough to cover the race".
Solvalla trainer Olle Hedin's horse Dartster F. is seen on top of the program pictured here. A star of the eighties who once finished second in Elitloppet and was awarded horse of the year in Sweden in both 1981 and 1982.
Nuncio, Iceland and Copiad are all winners of Elitloppet who also have won this memorial race at Solvalla with SEK 100,000 for the winner.

"A lot of respect for Volstead"
What can Stefan 'Tarzan' Melander do from the inside post with 1 Volstead, Elitlopp contender last year who hasn't been seen on the racetracks since last October?
"We'll see how Melander reasons regarding equipment and shoeing being that this is the first start of the year. Horses from his stable have been very good in their first starts this year, so I have a lot of respect for Volstead" says Mattias Spante.
The Solvalla handicapper gives the nod to Robert Bergh's 7 Muscle Hustle. Take in consideration that this interview is done already on Monday.
"I have a soft spot for Muscle Hustle and I know that they were happy with his first start. I was hoping to see him in Elitloppet last year. He was in the talks last year and with his first start in mind he's one of the horses I'm the most excited to see".

Maybe the favorite?
Volstead due to his post position, Muscle Hustle due to his first start, but another horse looks like the probable favorite.
"2 Sorbet has been very good and won three races so far this year and it looks like the Daniel Redén trainee will be favorite once the betting gets going on this race" says the handicapper.
4 Charrua Forlan won his first start of 2018 and won this race last year in his second start of the year in what was a dead heat with Lionel after a great effort.
"I don't think you should disregard Charrua Forlan. Sure, Volstead might be quick enough to hold up the lead but there are a couple of other horses who can leave very quickly too and Charrua Forlan is one of them. Hans-Owe Sundberg has listed Emila Leo which will be fun to see".

Any early tips in any of the other V86 legs?
"9 Isco Boko (V86-4) has been very good lately and Mattias Djuse showed at Solvalla last Saturday the his stable is in continued good form. He's a nice horse and could possibly be a lock on V86" says Mattias Spante.