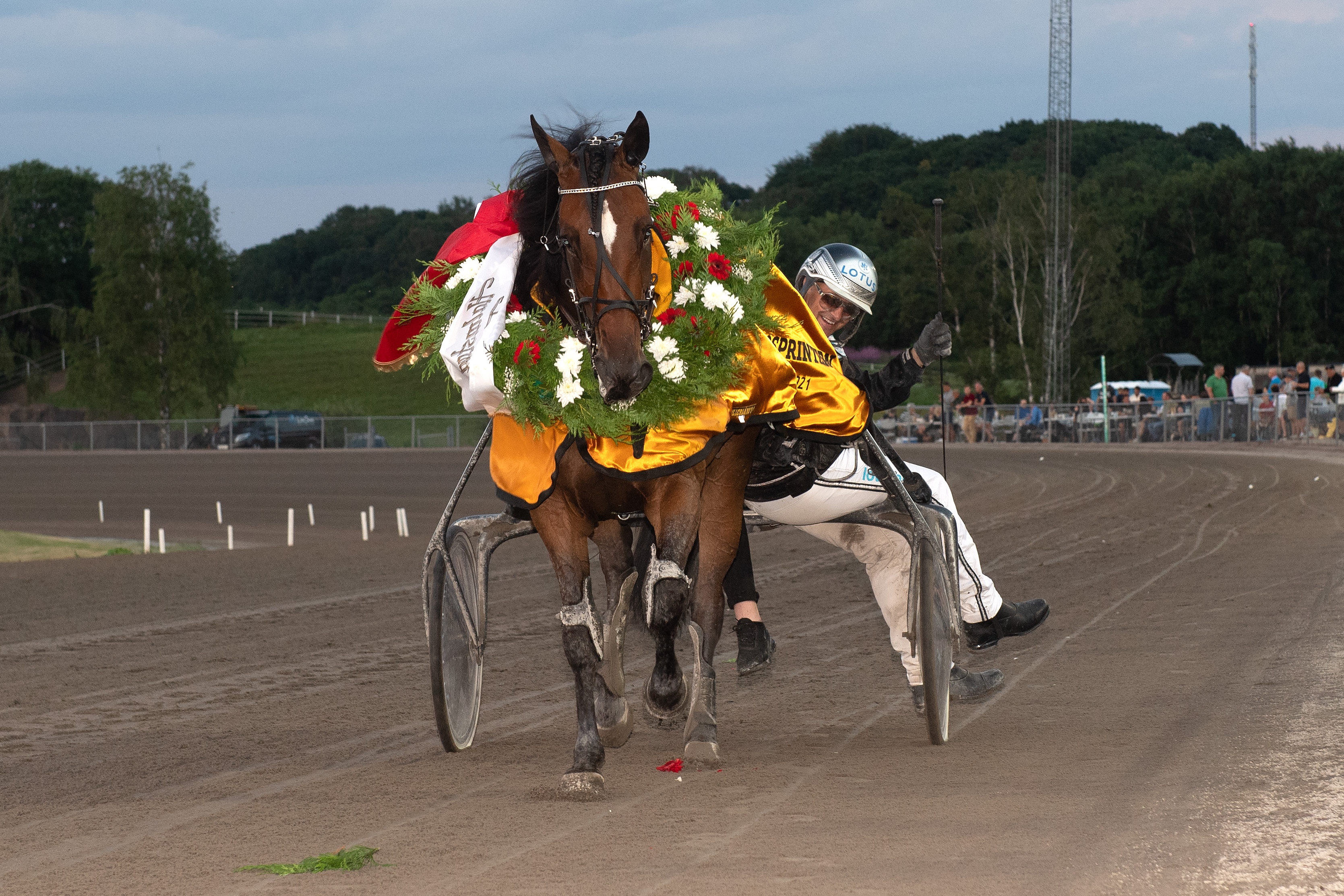 The winner of the Sprint Championship for mares, Robert Bergh's Fifty Cent Piece goes out against the boys for the first time.
The fact that Eskilstuna's Fyraåringstest on Wednesday goes over the long distance is another new thing for the top mare.
On the plus side is her performance in the Sprint Championship for mares two weeks ago which showed that the U.S. born mare can handle most that is thrown her way.

Fifty Cent Piece started her career in the USA with the Swedish trainer Marcus Melander where she made over $140,000 in two seasons and was known as a strong and uncomplicated filly.
At the end of last year, owner Lennart Ågren (SRF Stable) flew her across the Atlantic and left her with Åby trainer Robert Bergh.
The results were immediate. This spring and summer Fifty Cent Piece has won both the Queen's Trophy as well as the Sprint Championship for mares.
In the final at Halmstad two weeks ago, Robert Bergh placed her outside of the leader and she won without having to go all out. Fifty Cent Piece won very easily in the new track record time of 1:10.5 over the mile.
On Wednesday she will be one of the favorites in Fyraåringstestet (V86-7) in Eskilstuna on a card that is boosted by a jackpot, which guarantees SEK 13 million to a sole winner with all eight winners picked.
Trainer Bergh was very pleased with his mare after winning the Sprint Championship for mares.
In the interviews following the race, he meant that she would have done just fine in the boys' division and would have been closer to the winner Önäs Prince than his own Rome Pays Off (finished second) was.
Oskar Florhed in the Bergh stable:
"Yes, I think so too. I think she is better than Rome Pays Off, actually. It's always hard to compare and to speculate but she is really awesome!
Oskar Florhed has experience from the U.S. after having worked there himself for both Jonas Czernyson and Åke Svanstedt and he knows how it works. That the distance is 500 meters longer than the mare has ever raced before isn't something that worries him. He means that Marcus Melander's training builds a good foundation for a continued racing career in Europe.
"She has been trained in a way that means she will be strong. Fifty is a racer model of a horse but she has been trained by a Swedish trainer in the U.S. and that's the difference. When American horses come over to Europe from American trainers they can struggle with the longer distances. But she has been trained a lot in the deep sand and she is strong" says the second trainer in the Bergh stable.
"She trots on a low gear"
According to Oskar Florhed, when Fifty Cent Piece races against the boys on Wednesday, it is for the very first time. Seven horses line up behind the starting gate in Eskilstuna's Fyraåringstest over 2,640 meters. Fifty Cent Piece is the only mare in the field.
"It will be fun to try her against the boys. We always train 2,600 meters and she is strong. She is very easy to rate and she trots on a low gear in a race, which obviously is an advantage. There weren't that many races to choose from for her right now and it's important to try something new, so we know she can handle that too. Just like before she races with an open bridle, barefoot and a regular style sulky".
"She will race with pullout earplugs again. Robert has only pulled them once when she won the Queen's Trophy. Right now she's in a build-up phase. But once she comes out over 1,600 meters with blinds and everything else is optimal, she will trot fast. If needed, she will trot a low 1:09, pretty easily when that time comes" says Florhed.
First time against the boys and over 2,600 meters. How do you like her chances?
"I don't think she raced against other than fillies in the U.S. as far as I can guess. But I don't think she cares much. Tarzan's horse 4 Maesteraemon, who was very good in the Sprint Championship is one of several tough opponents. But normally, Fifty should have a good chance to win".
How is the mare's temperament?
"She is very tough. She can not go in a big field with other mares, she wants to be on her own. She is a very dominant, assertive mare with a tough attitude. She was very good in her last start. She won with the earplugs still in. She is actually very lazy in a race, she trots on 60-70%. But once it's go time she is ready".
You also have 1 Chestnut Bojje in the same race. He made a break when he last raced, in a Sprint Championship elimination.
"He went back to his old ways there. He was doing a lot of that back in the spring but then he had behaved for four straight starts. It's just nonsense. So we hope he minds his manners now. Besides that, he is close to top form. He was trained to be in top form for the Sprint Championship for we hope it stays for another couple of weeks. But I think winning will be tough for him. First of all, he needs to stay flat. He goes out here mostly to get some toughness against good horses before the Derby this fall".
Which one out of your starters has the best chance on V86?
"Fifty has a good chance, but 9 Jimmy Arthur (V86-8) has an even better chance. It has taken a lot of time to get him ready but now he is there. He has dealt with tough trips and has gotten better and better every week. Jimmy fits the class well and he's strong. Hopefully, he doesn't have to go first up this time, maybe he can get a nicer trip. 4 Belker (V86-1) is much better than he looks in the program. In his last start, he got a flat tired after 100 meters in Lycksele, so he was excused that time. Maybe he can finish top three here?"